It's time for the final instalment of the Patio Gate Rebuild project!

When we left off in the last article, I had the gate glued up, the dowels in place, and gave the whole project a light sanding with 80 grit sandpaper. Sanding is my second least favorite task, and now we're moving on to the least favorite - paint/stain.

I went over the whole project with some mineral spirits to get the sawdust out of the grain. Whether or not mineral spirits is appropriate for that, I don't know. All I know is I wasn't about to run out and buy tack cloth (I've had bad experiences with it in the past as well) so this method would do me just fine. After a few passes with clean rags, it was free of most dust.

Now I had spotted some of those plastic yellow pyramid-shaped standoffs for painting on a previous Home Depot trip, and had the foresight to grab a set. I had a pine board still in it's plastic for a future build, so that would make a good base to apply the urethane over. I set up the pyramid standoffs, and got to stirring. 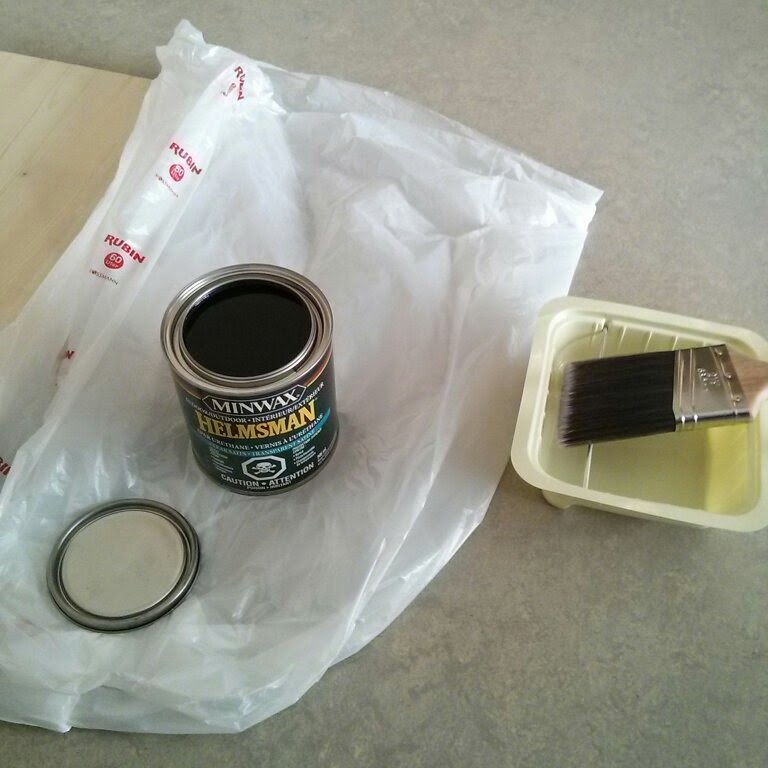 (Above: Helmsman Spar Urethane was my finish of choice)

I picked up a synthetic brush for this project, and made sure not to skimp. In the end I wish I bought those cheapy $1 brushes because really, synthetic brush + Spar Urethane = ruined brush, no matter how much you try to clean it.

Oh, and never paint indoors, no matter how well you think your air circulation is. I got dizzy in a hurry. Which is strange, I figured it would have been fine. Regardless, the second and third coats were done outdoors. 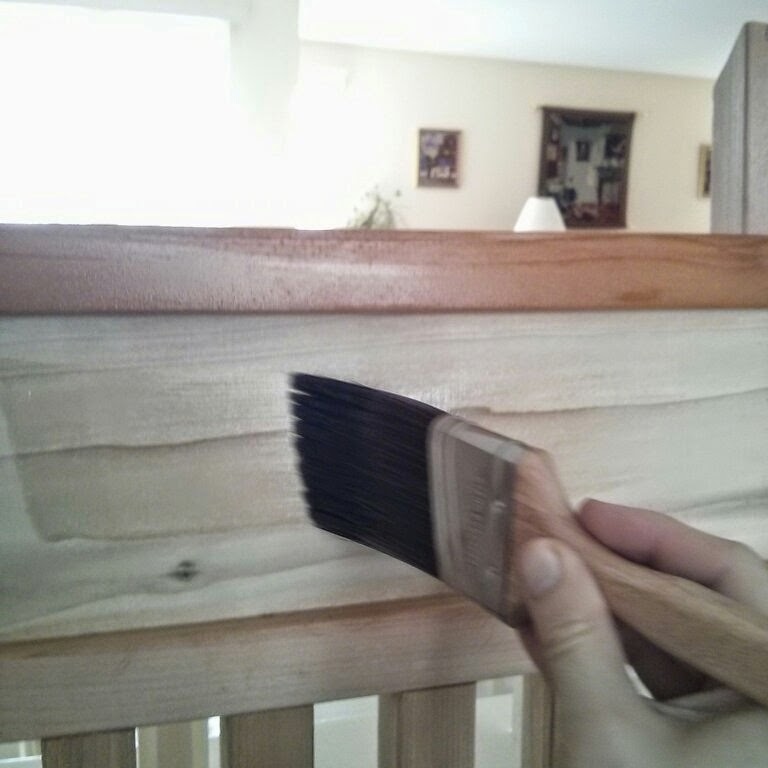 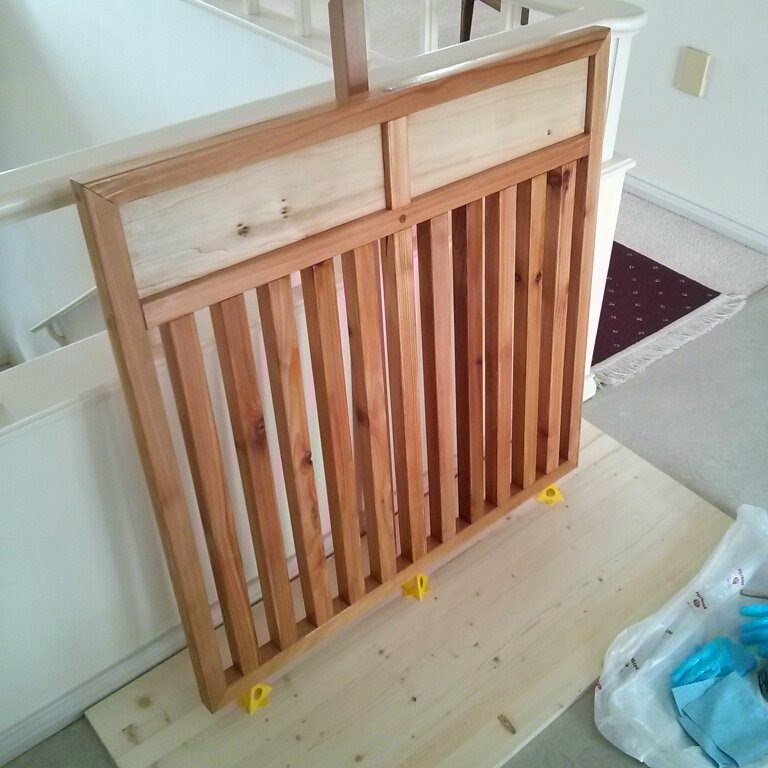 (Above: After 1 coat, it started to look pretty good!)

Once all three coats of urethane were applied (sanding with 180 grit between coats, and wiping off with a soft cloth, to keep it fairly smooth) - it was time to install the hinges. Since I had pre-drilled the holes for the hinges before finishing, this was easy. 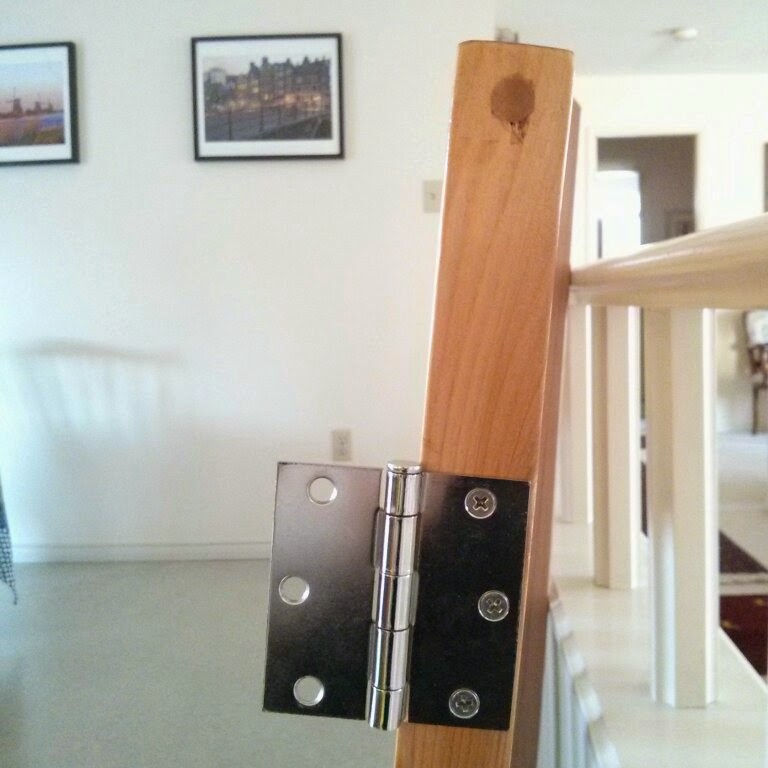 My parents deck is not level. Or square. It's actually a bit of a nightmare. So to get the gate to mount 'somewhat square' - or in this case I opted for level - I had to use a shim or spacer.

I measured out roughly the angle/space I needed to fill in to get the gate to sit correctly, and traced a cut line onto a spare baluster. I'm not going into the details on how I cut this piece with a handheld circular saw, but let's just say it was tricky. (But at least I did it safely!) 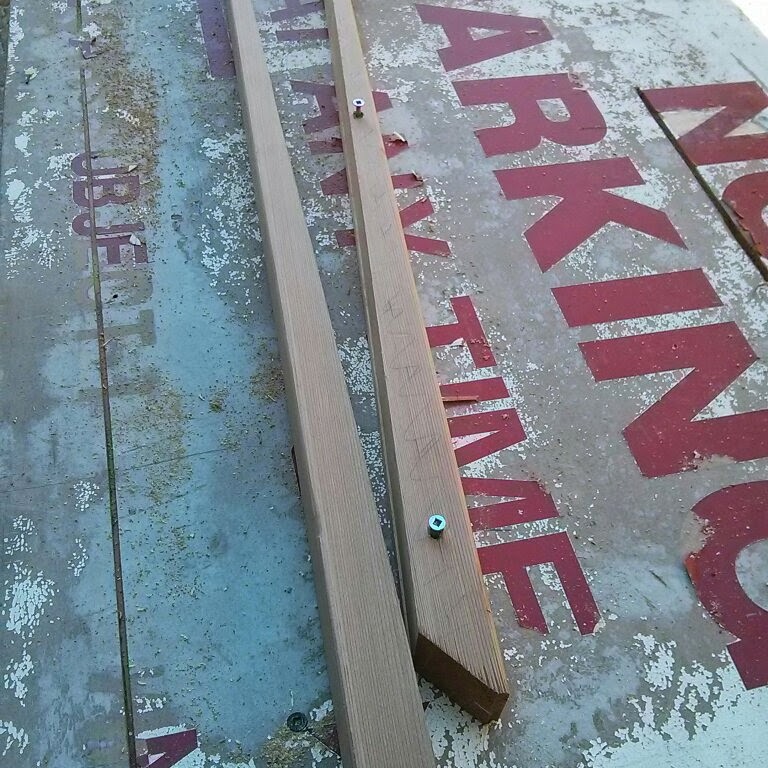 (Above: The angled baluster 'wedge' to level/square up the gate)

Finally the fun part! I broke out the power tools, requisite bits, and all the clamps and shimming materials I'd need to get this gate installed.

I ran into some issues with the baluster 'wedge' I had cut earlier... It didn't fit.

Tossed aside and a new solution was planned, I remembered I had some cedar shims that would work well! So I clamped 1/4" worth of blocks on the left of the gate, clamped the gate to the railing, and shimmed up the right side to fit. Marked the location of the shims/hinges, and took it all down.

After propping the gate up in the open position, I started to mark and drill the holes. Once those were done, I used deck screws to mount the gate to the railing. I chose deck screws because they were longer than the original hinge hardware screws included, and since I'd be using shims... they just had more holding power. 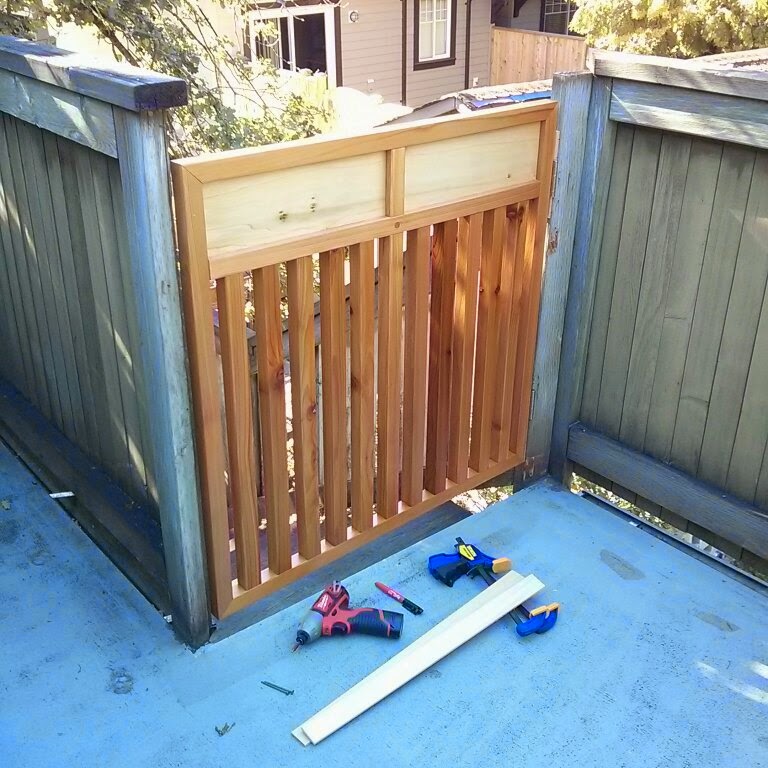 (Above: Shimmed and installed, in the closed position) 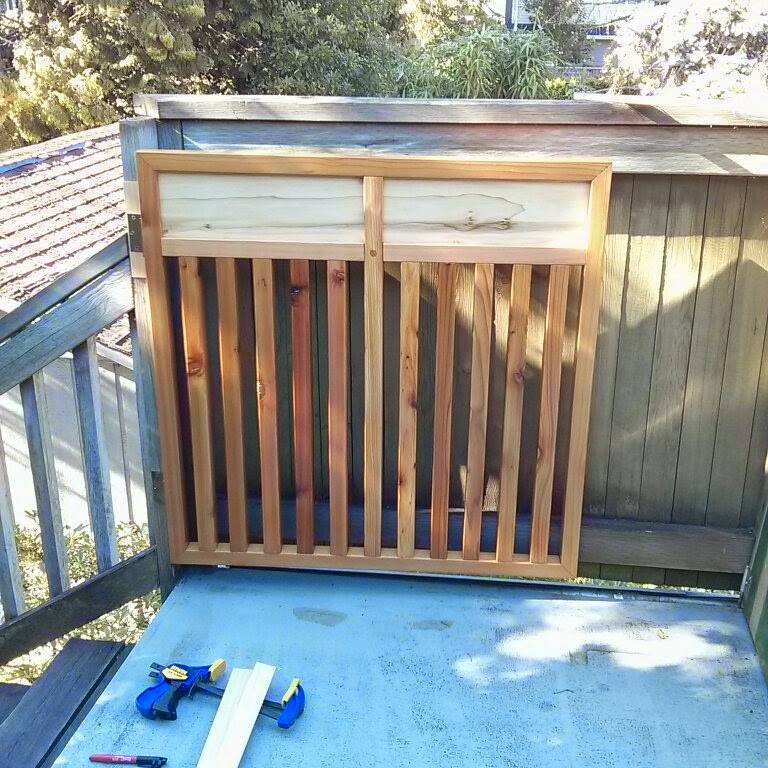 (Above: Shimmed and installed, in the open position)

After taking a moment to stare at my handywork, I moved on and installed the latch hardware. This required some delicate drilling of pilot holes and putting the screws in by hand. No brute force power tools here, I didn't want to split or crack the wood, and the screws are kind of close to the edges, which I don't quite like, but it seemed secure in the end. 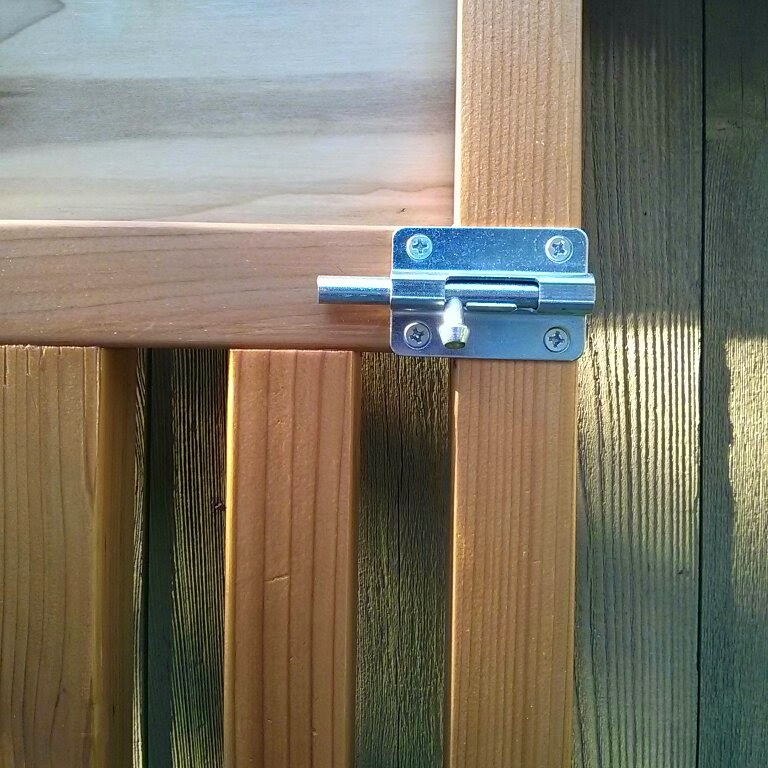 Now that the latch is installed, I had to drill out the receiving hole for the latch bolt, to keep the gate closed. Lucky for me, when the gate was closed, the latch sat in just the perfect place - everything was flush and no adjusting was needed. 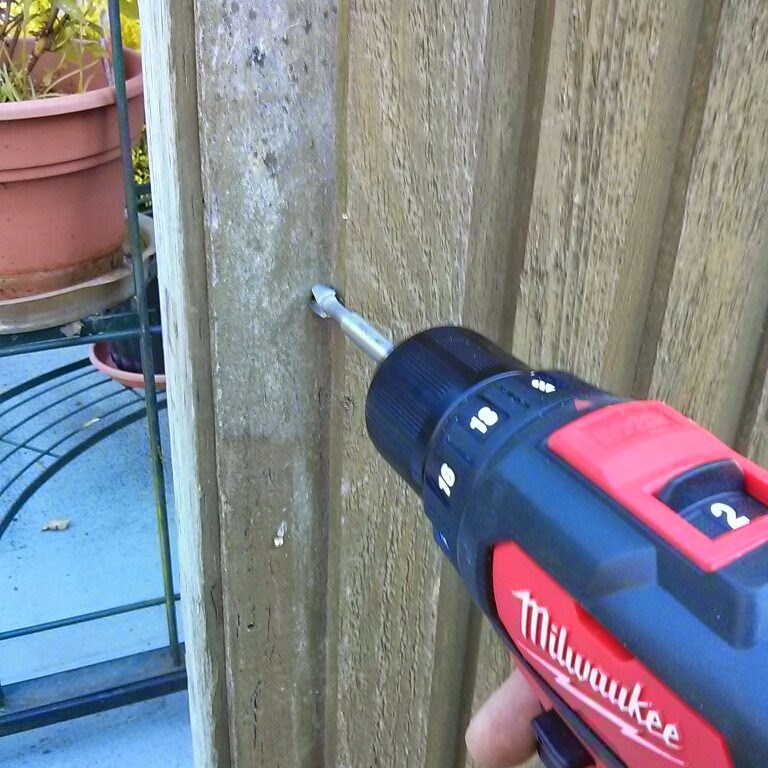 And now the moment of truth... testing if it works... 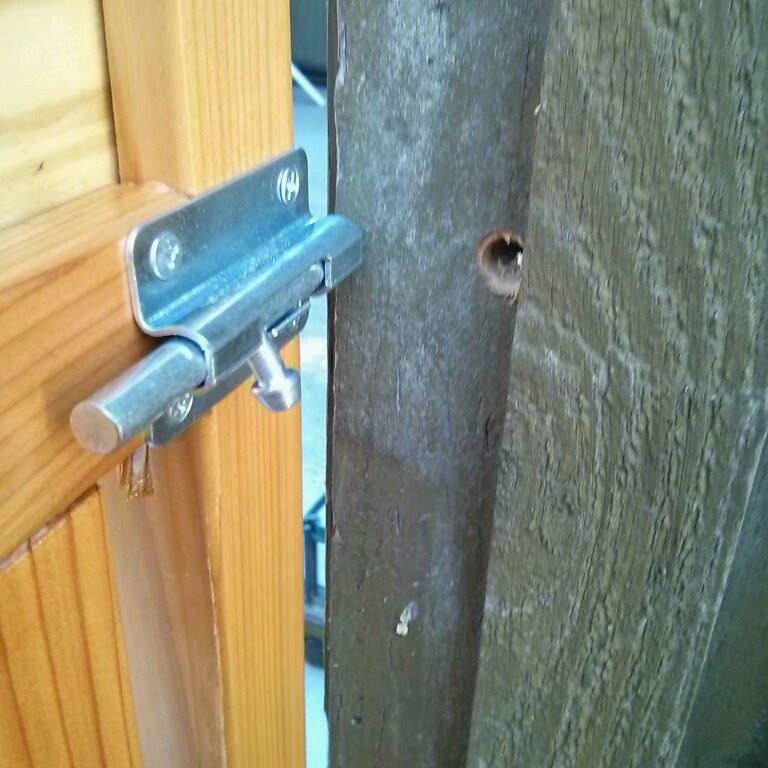 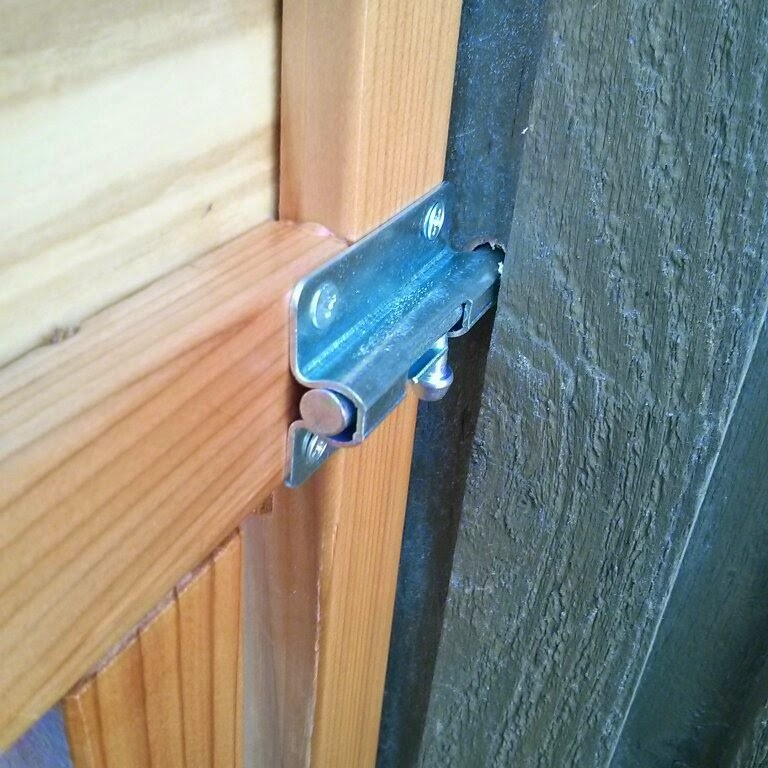 It fits Perfect! I plan to epoxy in a brass or copper pipe bit into the hole to give the whole thing more support, I just have to find a scrap bit in the junk bin. It should hold a bit better than wood, and to those who notice the little details, they'd appreciate it as well.

After that was said and done, I had one last thing to add. I wanted to use one of those hook catches to hold the gate open (even though gravity already does that, a breeze might slam it shut) - so I threaded in the eyelets under the railing, and also threaded an eyelet in the closed position too, just for overkill. Now the gate can be secured with two latches. 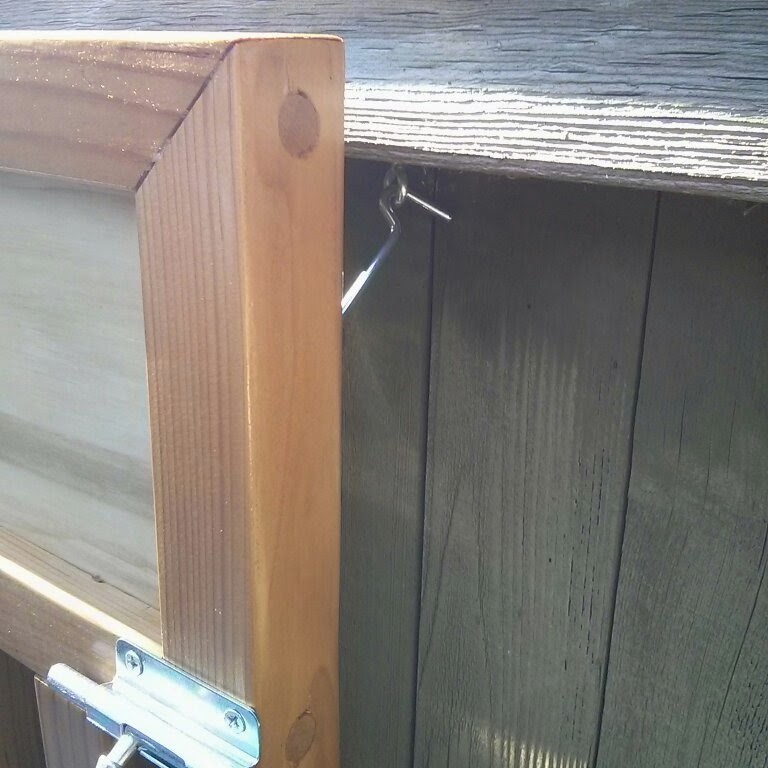 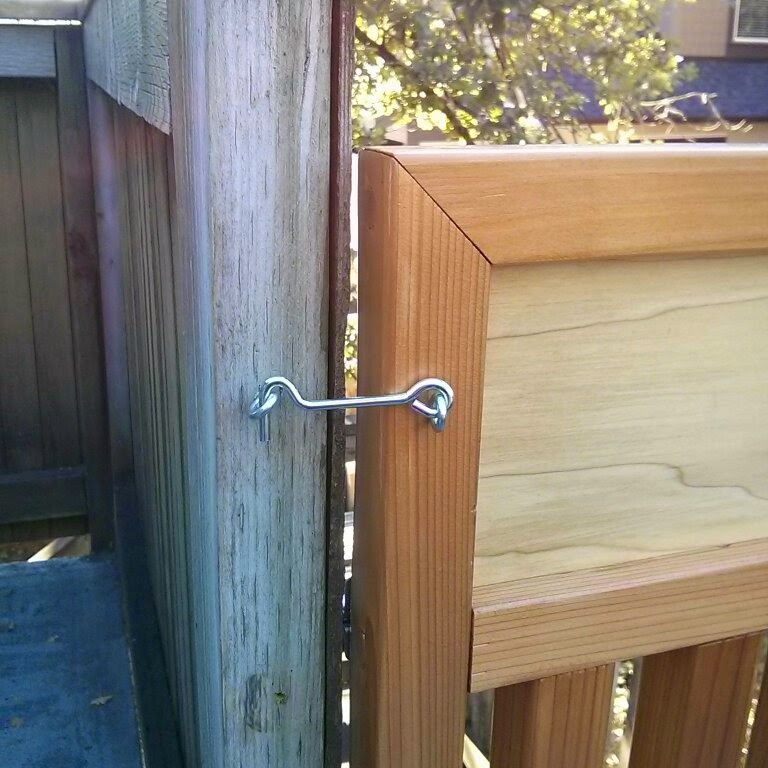 And voila! My "Patio Gate Rebuild" is finally finished, and just in time too - my folks are returning from their trip from Europe today. I hope they like it, I had a lot of fun building it, and now I can rest easy knowing my nephews + niece will be safe on the patio as well. 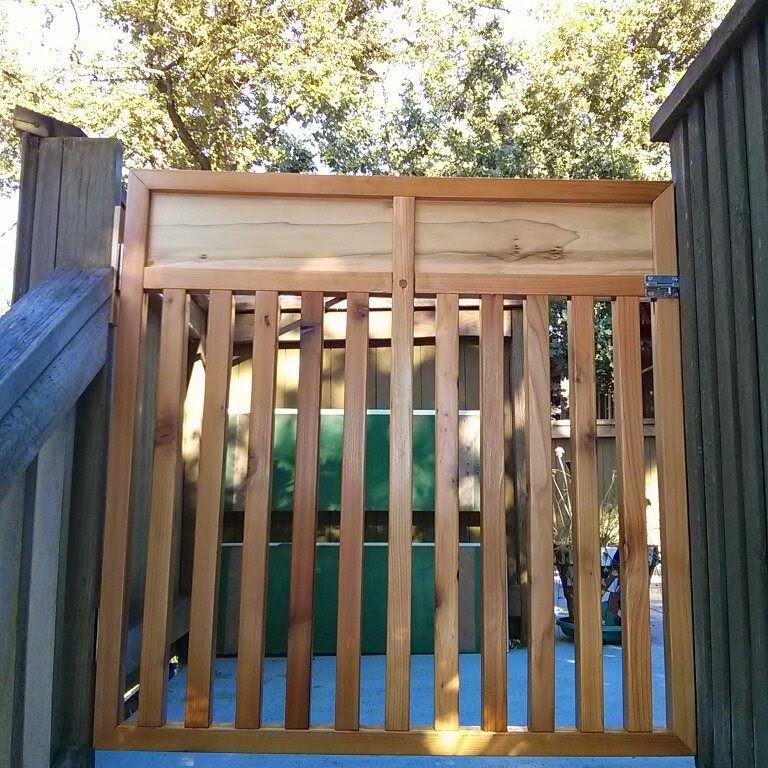 (Above: Juxtaposition of the old gate behind the new gate)

I hope you enjoyed this project, feel free to comment if you have any questions or nice things to say.