Welcome back to part 2 of my "Patio Gate Rebuild Project" - the construction phase. Now that the design phase is complete and the wood has been mocked up, it's time to start measuring and making cuts.

Since this gate is constructed almost completely of cedar balusters, we start with those. I opted for 'roughly' 35.5" x 35.5", so first I cut the miters of the outside frame. Simple 8 cuts, measure and re-check to make sure the 45's were actually 45 degrees.

Next up, cutting the balusters to length. I knew roughly how long they should all be, and making repeated cuts without having a bench or stop block made it a bit tricky. (As you can see, I was using a small miter saw on my deck... no workbench for me.) 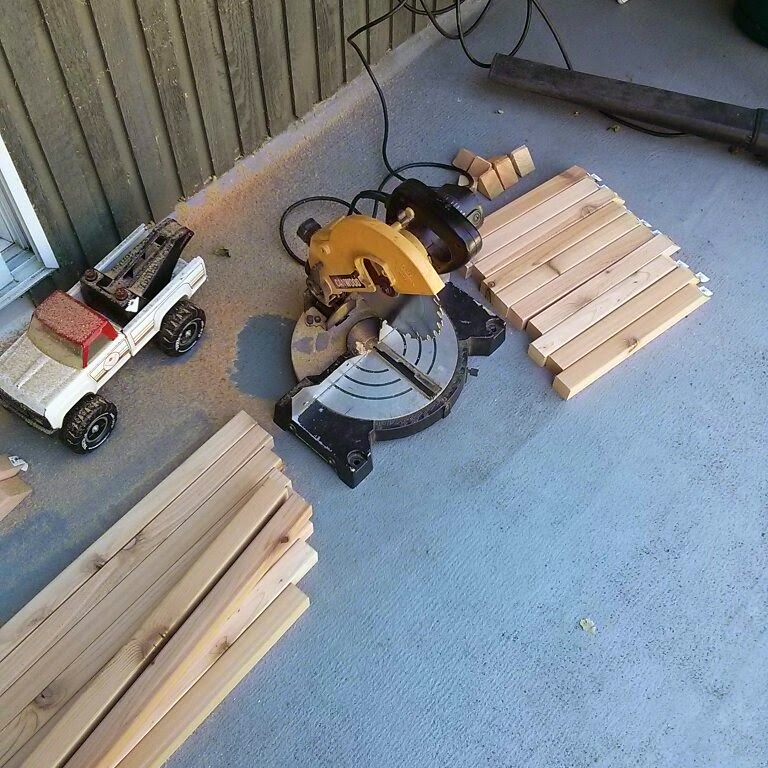 Once most of the cuts were made, it was time to find out how long I had to cut the main vertical post... which turned out being the same length as the horizontal post, so I felt a bit dumb. But it gave me a good chance to mock up and check my cuts, see if I needed to trim anything, and also mark out where the half-lap joint would end up. 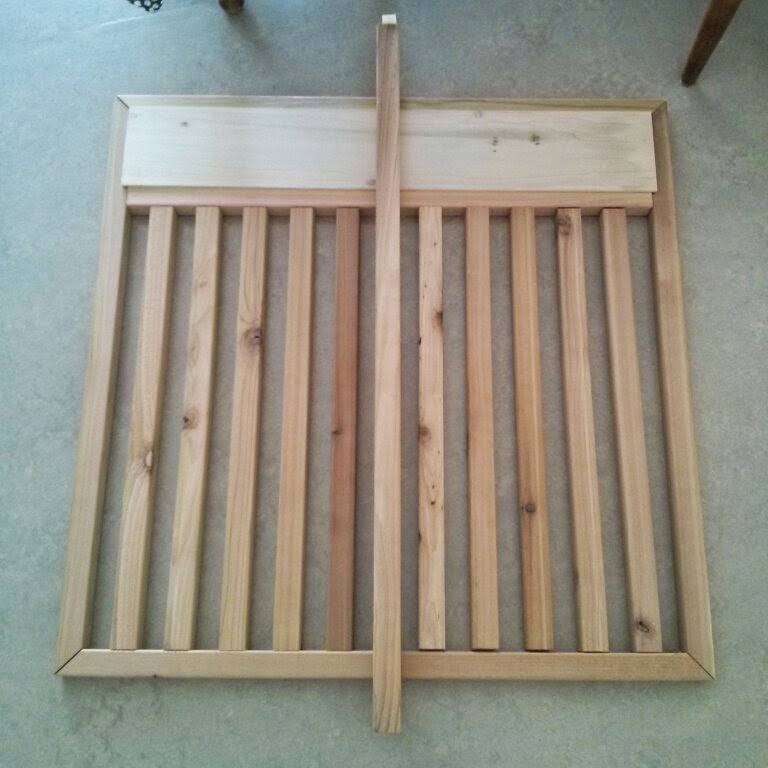 Once the vertical post was cut to length and I double checked the correct position of the half-lap, I made my marks and began removing material.

I used my "japanese saw" (thin-kerf pull saw) to make things a bit easier, and since it's cedar, it was like cutting through butter. Then I chiselled out the excess material for both the vertical and horizontal posts.

I also learned that when you buy a chisel from a store, it doesn't come razor sharp... which makes a bit of a mess when attempting to chisel material out of soft wood. No big deal, since I would dowel the half-lap joint later. 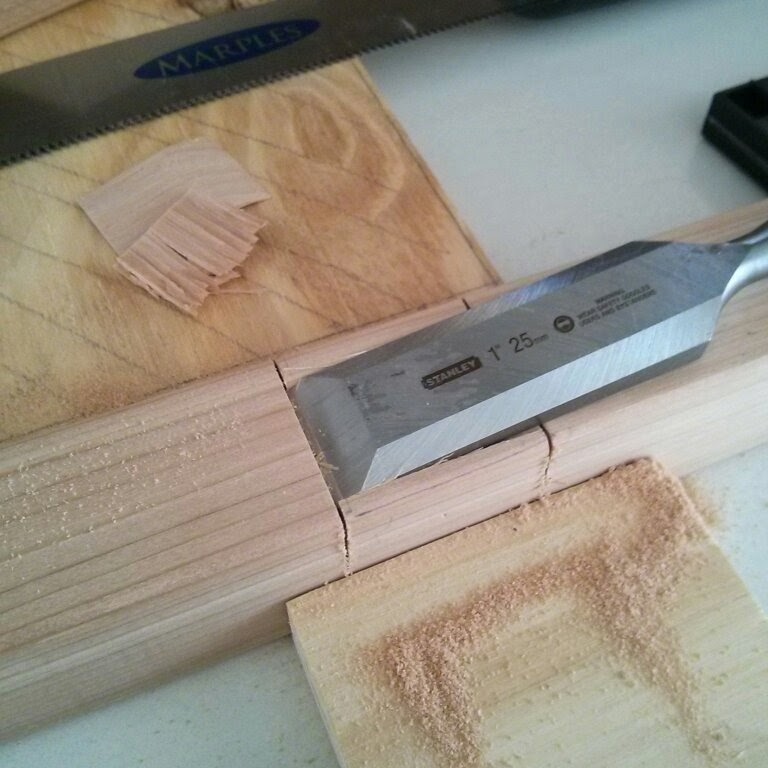 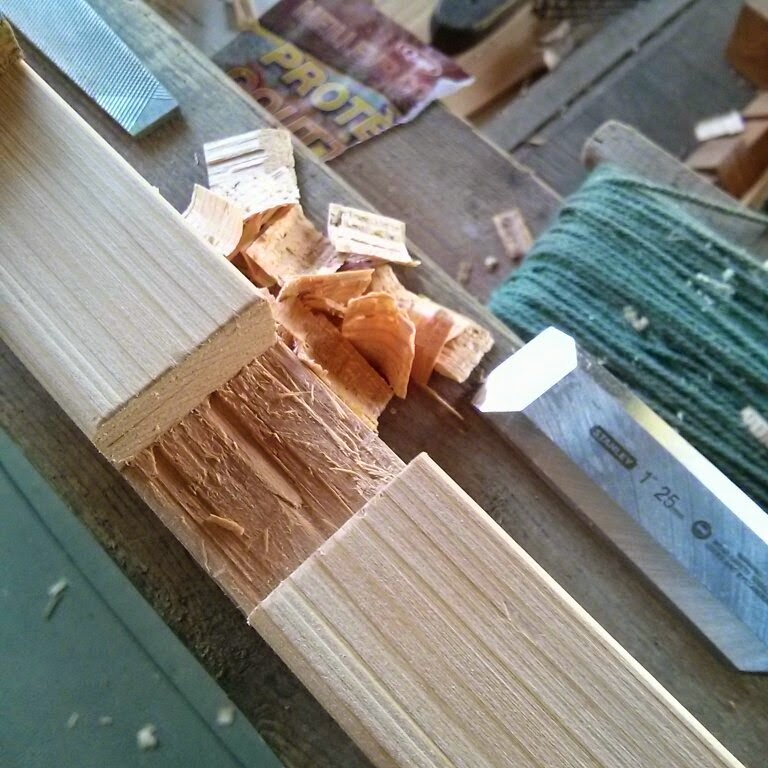 Once the half-lap was cut, it was time to cut some grooves for the panels I plan to install. This was a trial and error moment for me, since the table saw I was using was older than me and in bad shape, the fence needed to be constantly checked for square, and also I had to use the blade that was on it... no dado blades here.

After a number of passes on the balusters and some test fits, the panels seemed to fit well. A bit snug, but I was ok with that. (Turns out, later on they were too tight, so I had to sand the grooves a bit when I was installing the panels... oh well) 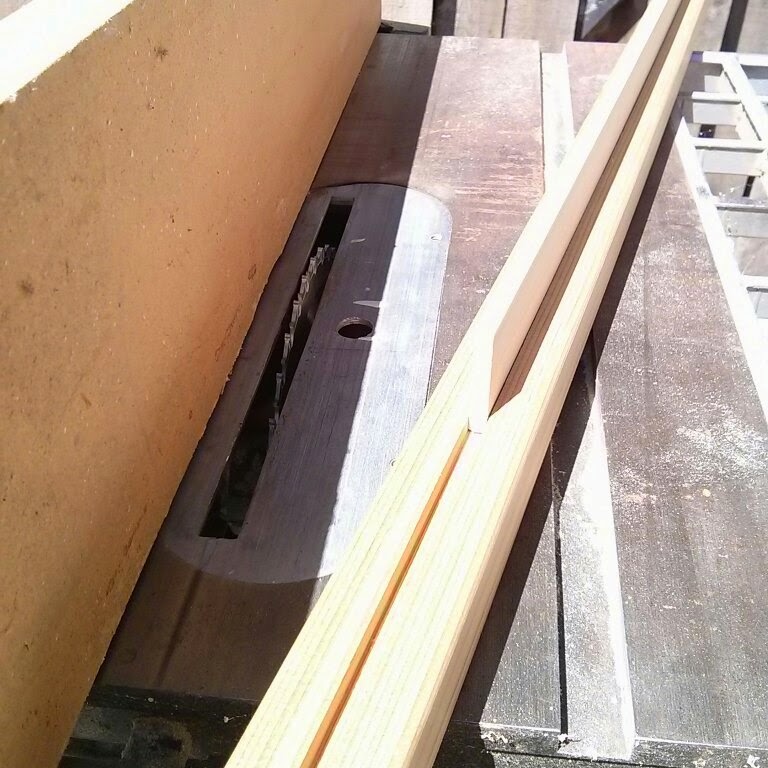 Once the grooves were cut, I mocked everything up again, checking the alignment of the grooves at the half-lap, and sliding in the panels to make sure everything worked out. 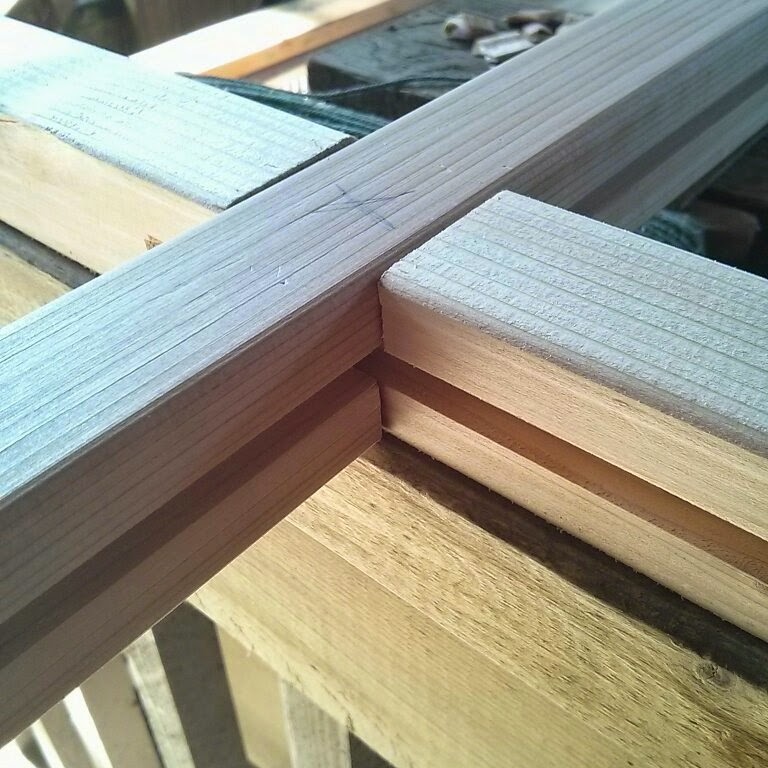 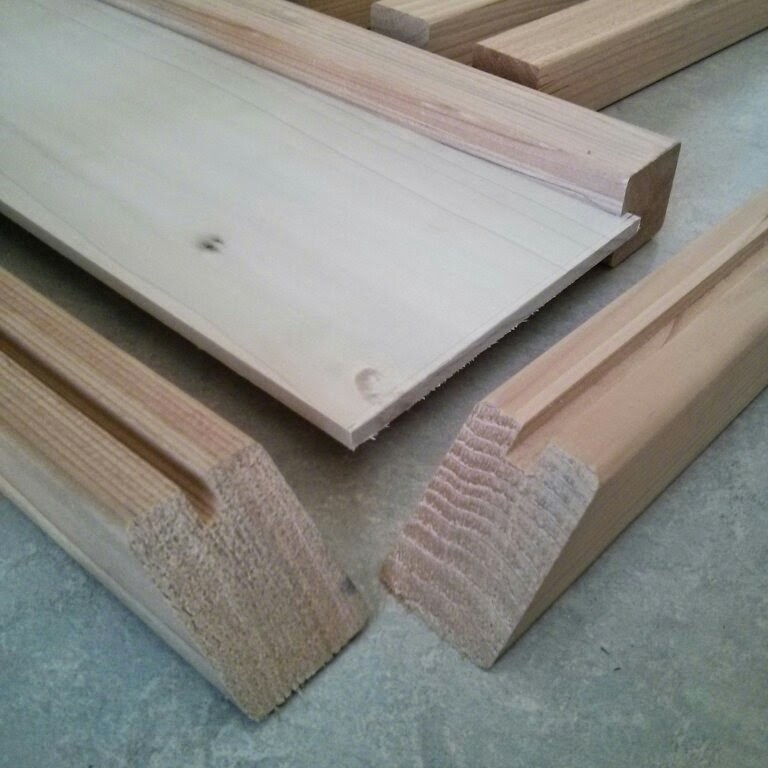 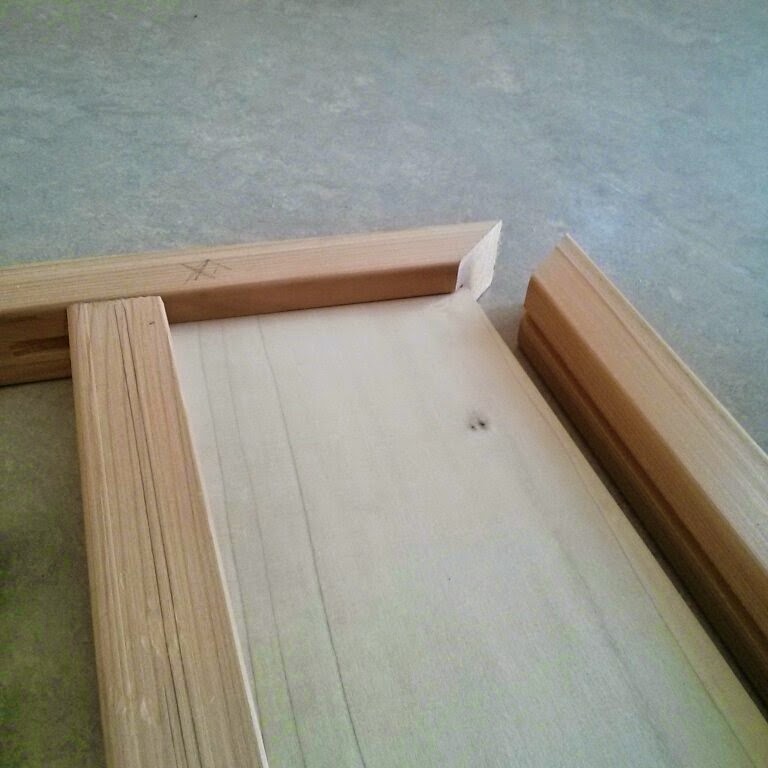 After the grooves and panels were checked, I then assembled the whole thing to start estimating the spacing of the vertical posts, and also decide where the hinges should go, roughly.

Everything seemed to fit well, the placement of the hinges would provide decent support, and the top hinge was placed specifically there to get more support from the horizontal brace. 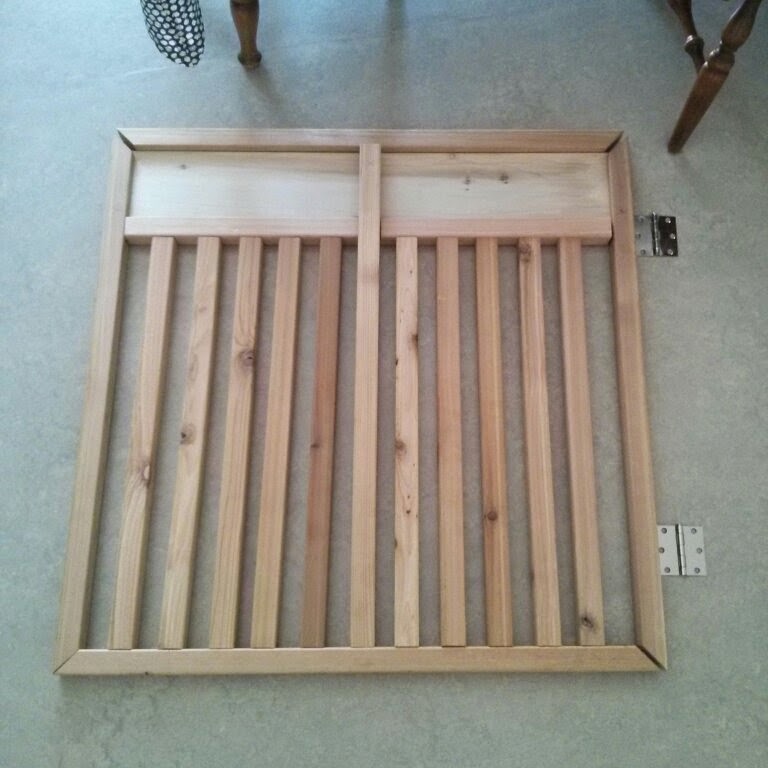 And then it was time to start some assembly.

First off, I glued and screwed the half lap joint. I also pre-drilled pilot holes for everything, because I was scared the cedar would split. I know it's less likely for softwood, but I wasn't about to re-do a lot of work for something as simple as a pilot hole.

This was also a great chance to start making things were square. The half-lap posts were basically the foundation of the whole gate assembly, so making sure things were square here, would pave the way for a fairly smooth and square finished product. 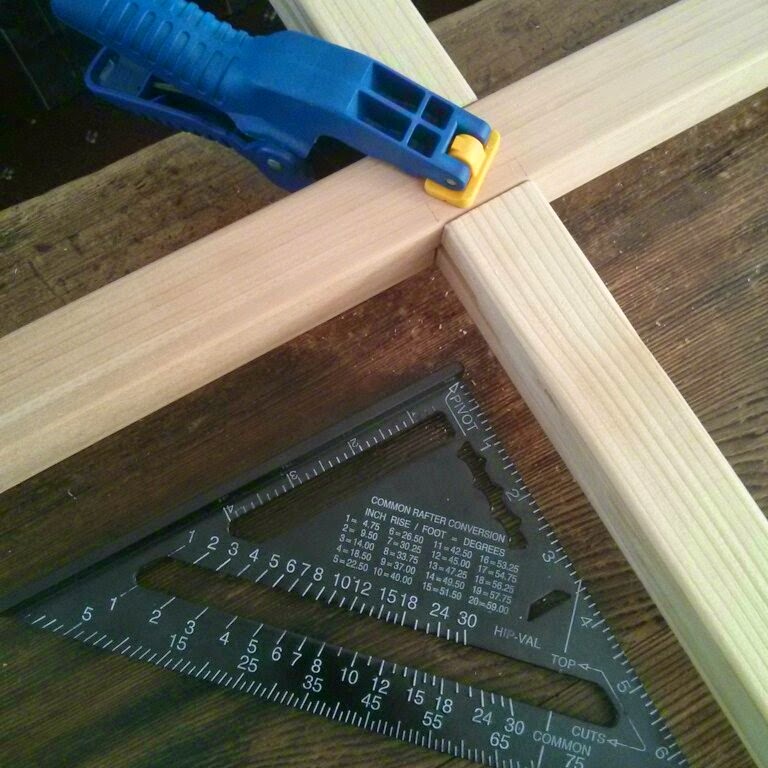 Once the crossed balusters were set, I did another test fit, to make sure all the joints were flush, check for square, and make sure everything fit. I also set the spacing of the vertical balusters to make it look fairly even.

This turned out to be a good idea, since I needed to adjust a lot. I had to trim off some excess material at the bottom of the vertical balusters... trim a bit from the horizontal cross-bar, trim the hardwood panels, sand the panel grooves to loosen them up a bit... basically finish up any last minute adjustments before I committed the whole thing to glue and screws. 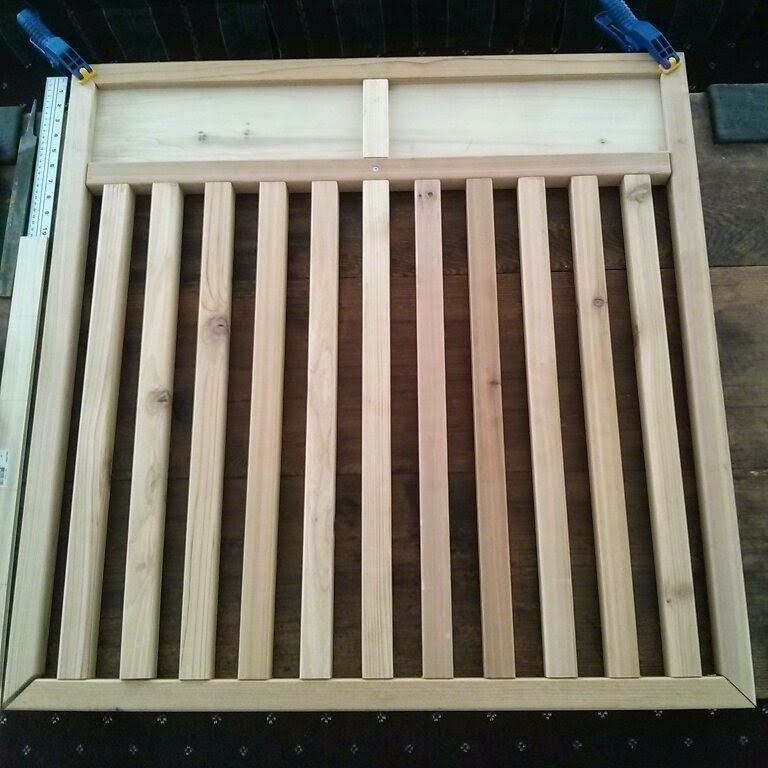 Once everything was adjusted, it was time to pre-drill the vertical balusters using the off-cut balusters as spacers. This made life easier in the end, because it let me screw in the balusters perfectly after. Without the pilot holes, it would have been a real headache. 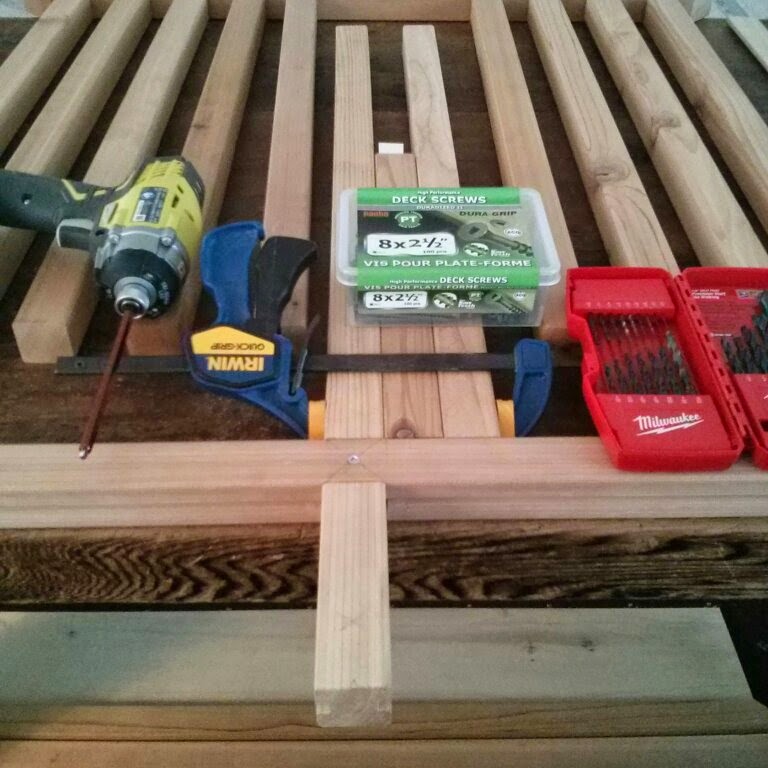 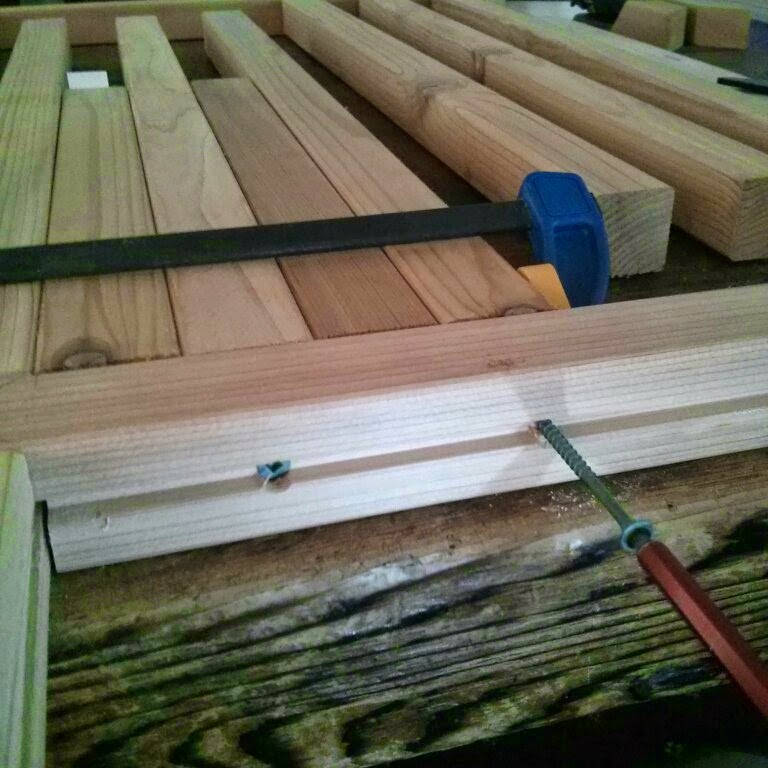 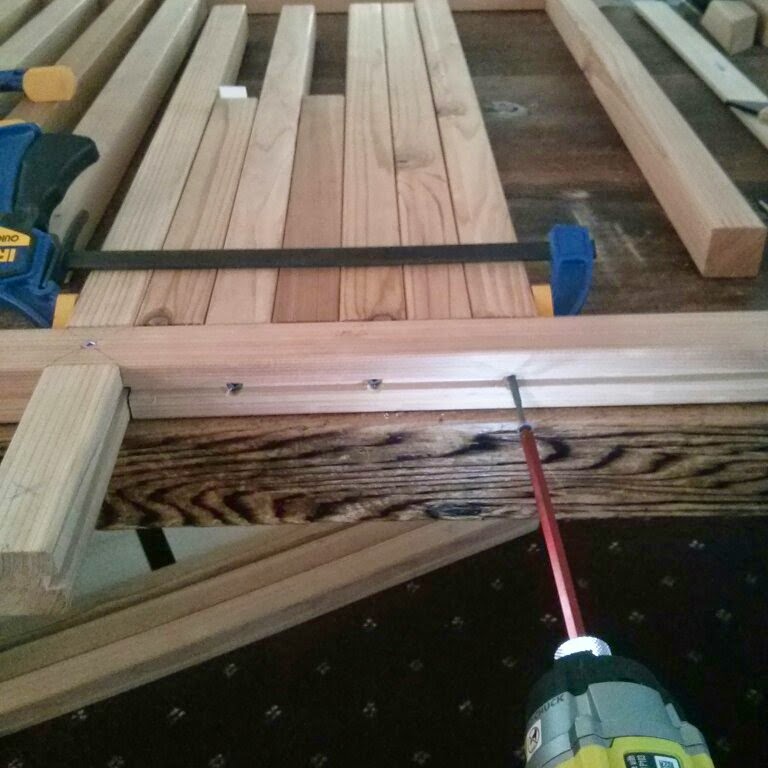 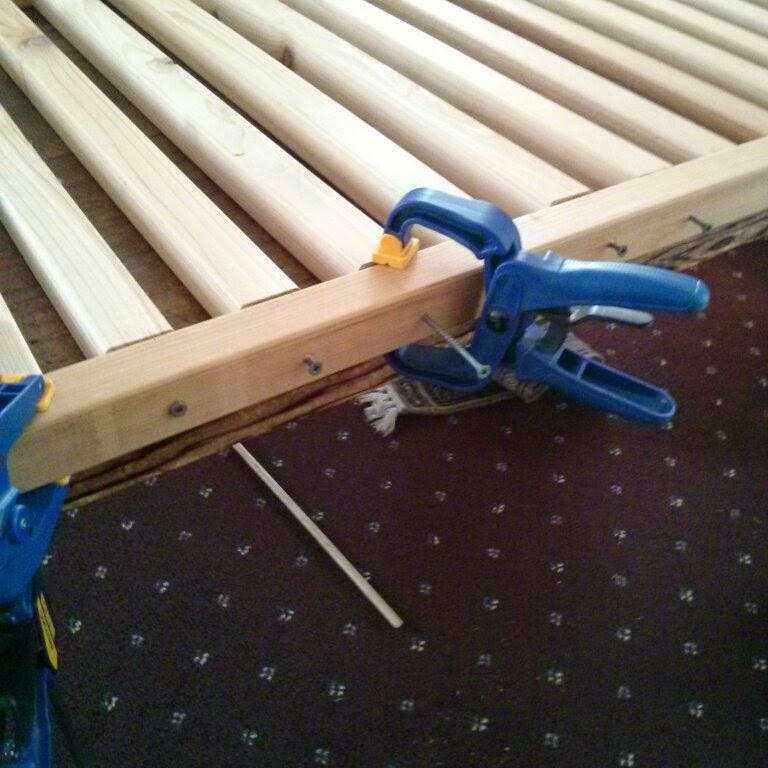 Pre-drilling and screwing the miters and side balusters... 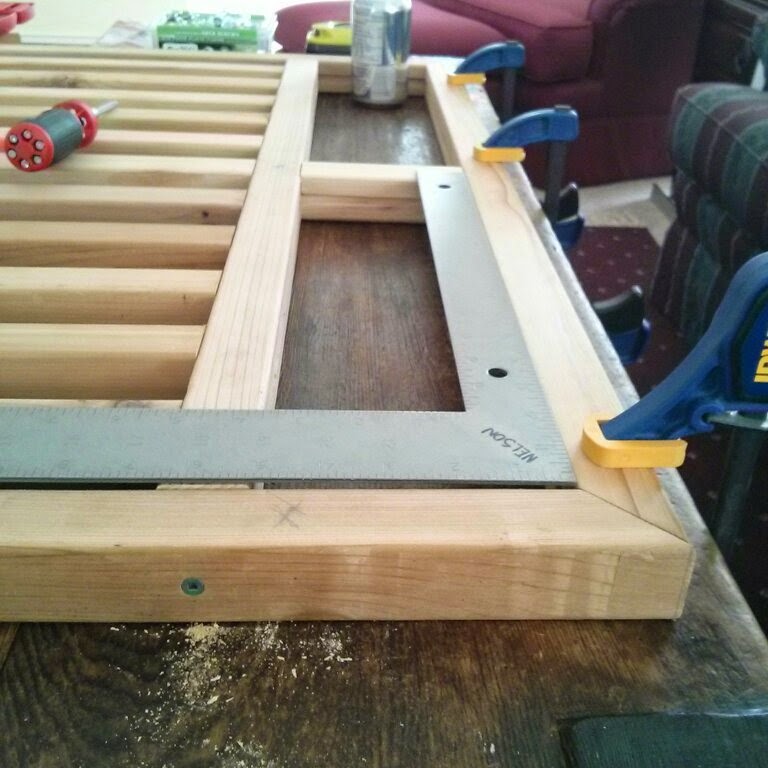 And securing the side frame and top frame... 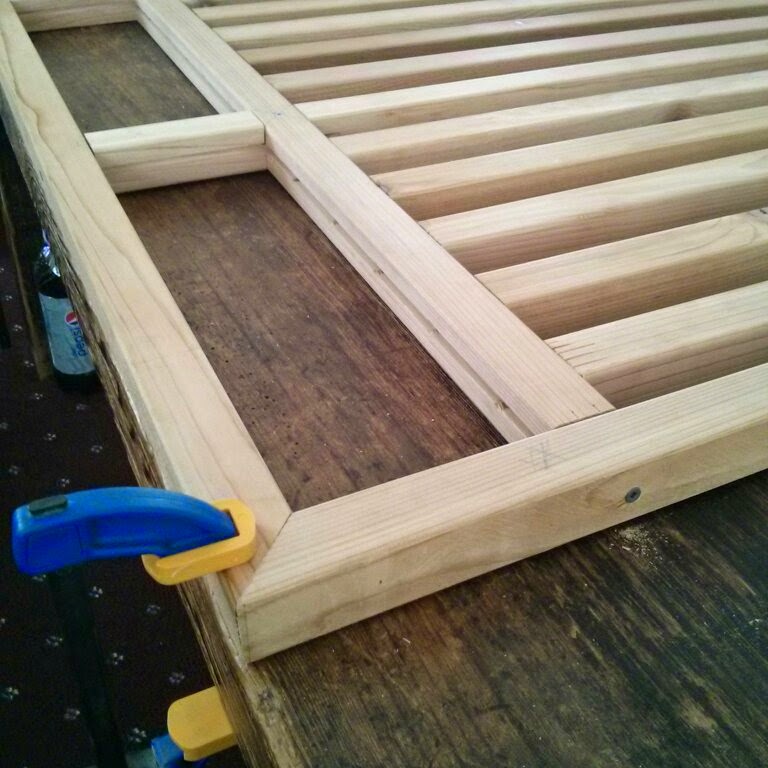 Now that I had everything pre-drilled and screwed in, I took a moment to step back and check the overall look of the piece.

The spacing of the verticals looked good. The ratios of the whole thing seemed to fit well. I also took a moment to figure out how I would assemble the entire thing. Order of operations when it comes to assembly is critical. If you mess that up, it makes things difficult or impossible to assemble. And when you're using wood glue, there is no 'undo' button. 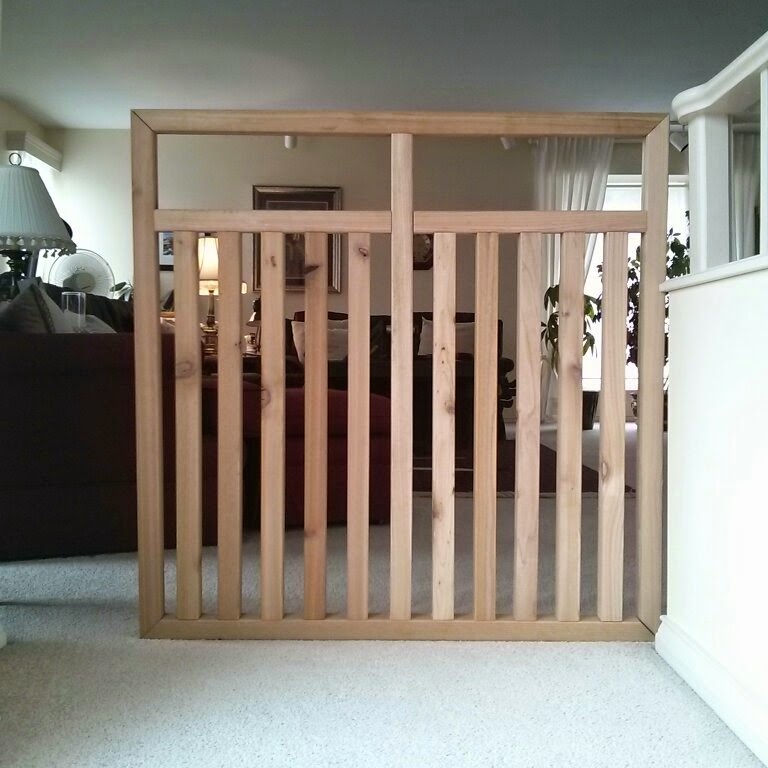 The first glueing step was to unscrew the tops of the balusters, apply glue, and re-screw them - the deck screws acted as clamps, which made life easy. Since I was assembling in my living room, I put some wax paper down on my coffee table, to prevent glue drips.

Next up was glueing and screwing the bottom of the vertical balusters. Same as before, screws acted as clamps, check for square, etc. (The clamps and extra balusters helped keep the frame fairly flat/square while the glue set) 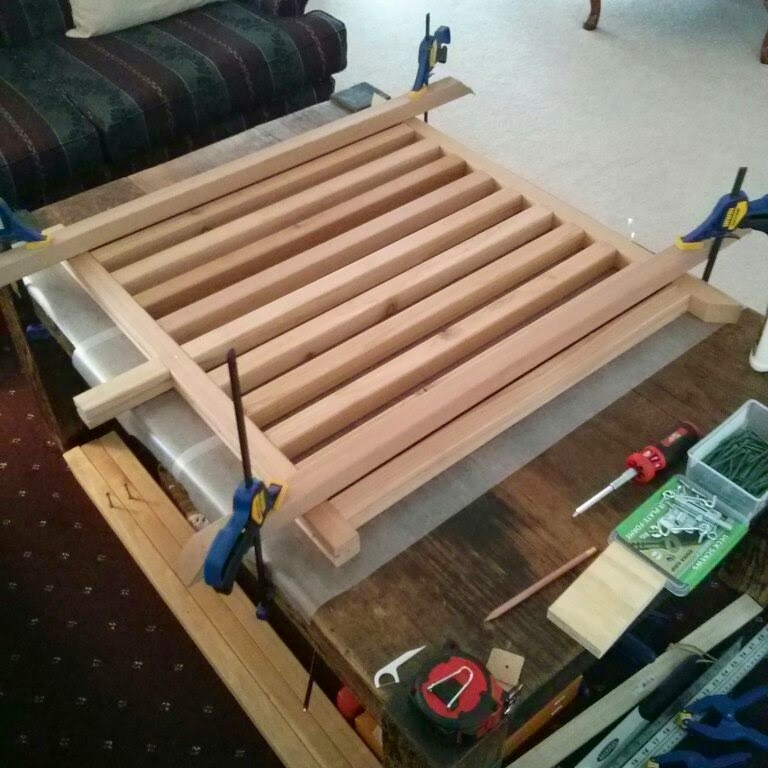 Onto the hardwood panels, once the main frame was assembled it made clamping these easy. Plus, to attach the rest, I'd have to assemble the top and sides, so having the base frame ready was required. Now that the panels were glued in, I glued the panel edges, installed and screwed on the top piece, and the side pieces, and miters. This proved a bit difficult, since if I hadn't pre-drilled the side frames and miters, I would have a tough time clamping the whole thing.

So by planning ahead, once I got the glue on, I ran the screws into the miters, side frame, and top frame, to help clamp the whole thing. I tossed on a few extra clamps for good measure and to help align the frame and keep things square. 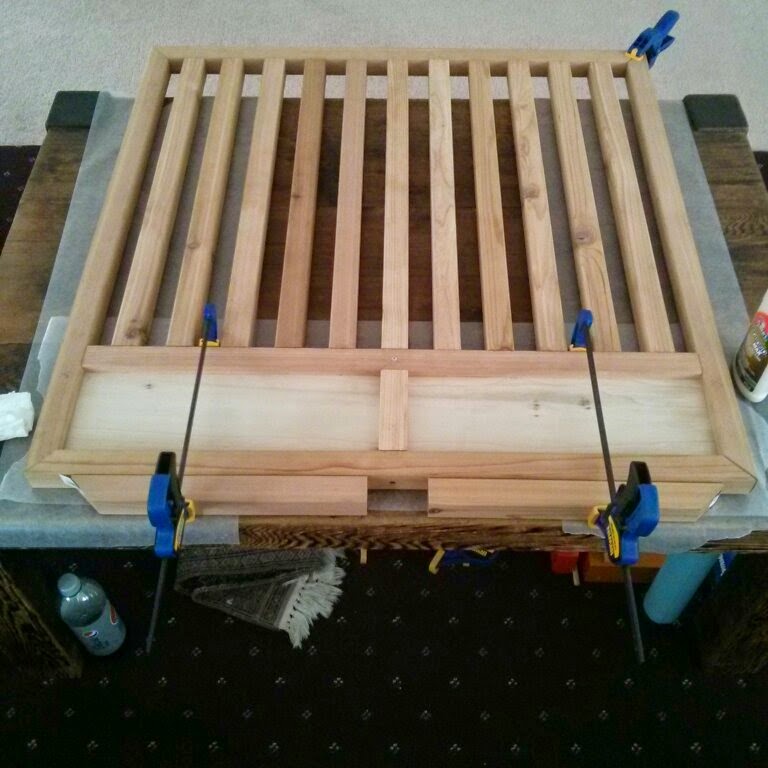 As with any project where you don't have dedicated space, or other limitations, you tend to have to do it in stages.  All of the above steps were spanned out over a couple days. Seeing as how the glue had dried, it was time to take a moment to make sure it fit between the deck railings. 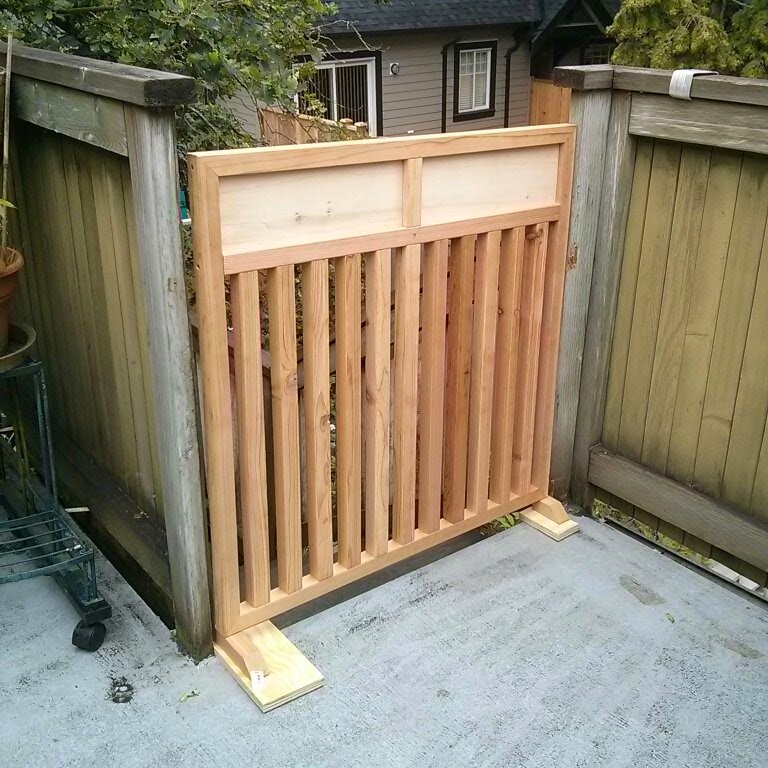 The deck itself is not square. Weather wreaks havoc on wood. Over time the deck is guaranteed to move, shift, settle, etc. On top of that, the city I live in isn't on bedrock. So foundations shift.

Regardless, the gate is square, the deck is not. How do I fix it? I took some measurements, and drew out the space I need to fill on the side of a spare baluster. I will cut that on the table saw, and check the fit, to see if it sufficiently fills the gap and keeps the gate square and level. 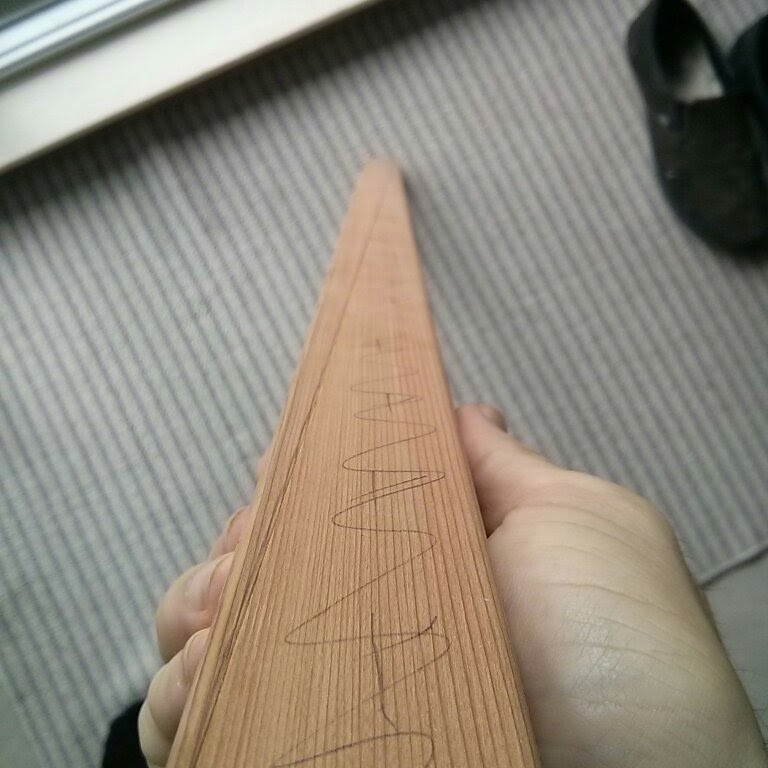 After going through one of the many test fittings, I wasn't entirely happy with the assembly of the gate. It was rigid, but the miter joints looked kind of ugly with a screw in them. Add to the fact that the glue joints weren't the strongest, and my original plan to dowel most of the assembly (which I skipped) - I ran out to the 'wood store' and grabbed some 5/8" dowel.

Remove the miter screws, remove the side frame screws, remove the half-lap screw... drill out in steps (to avoid tearing up the soft wood)... and test fit the dowel in the holes. Cut the dowels down to their rough size, glue the pegs, install, and let dry. Trim off the dowel excess, and wham! You've got yourself some strong glue joints! 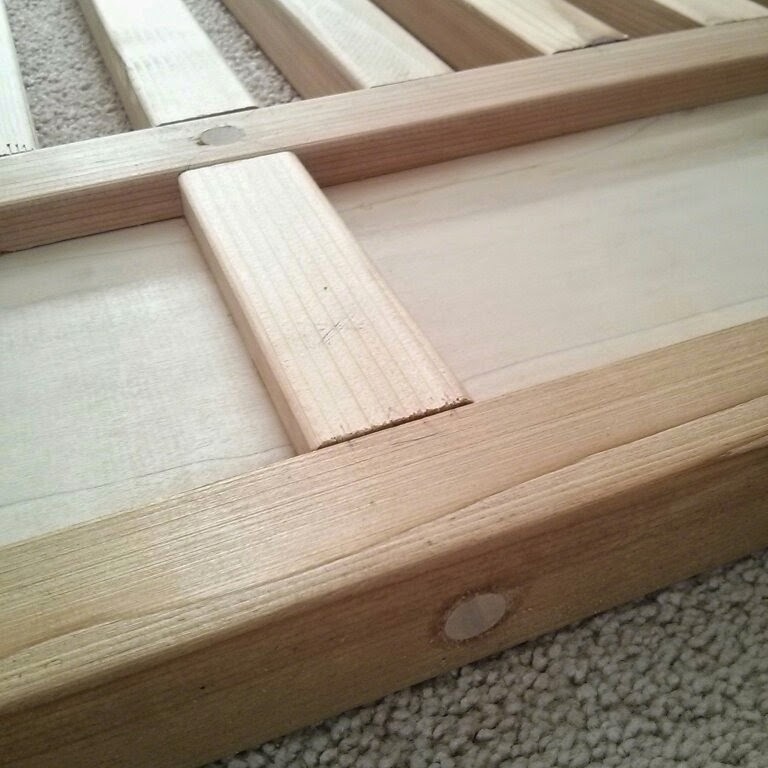 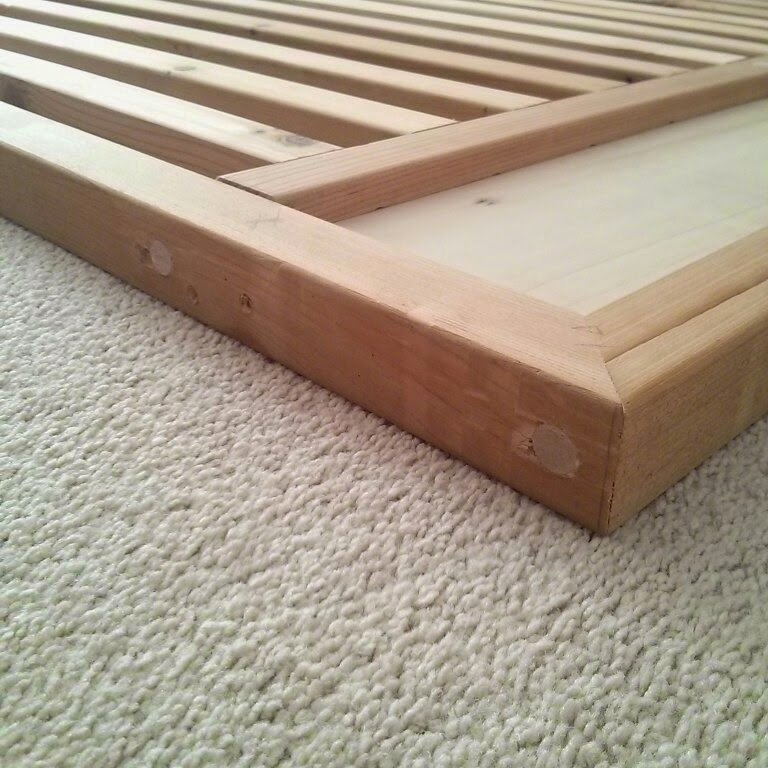 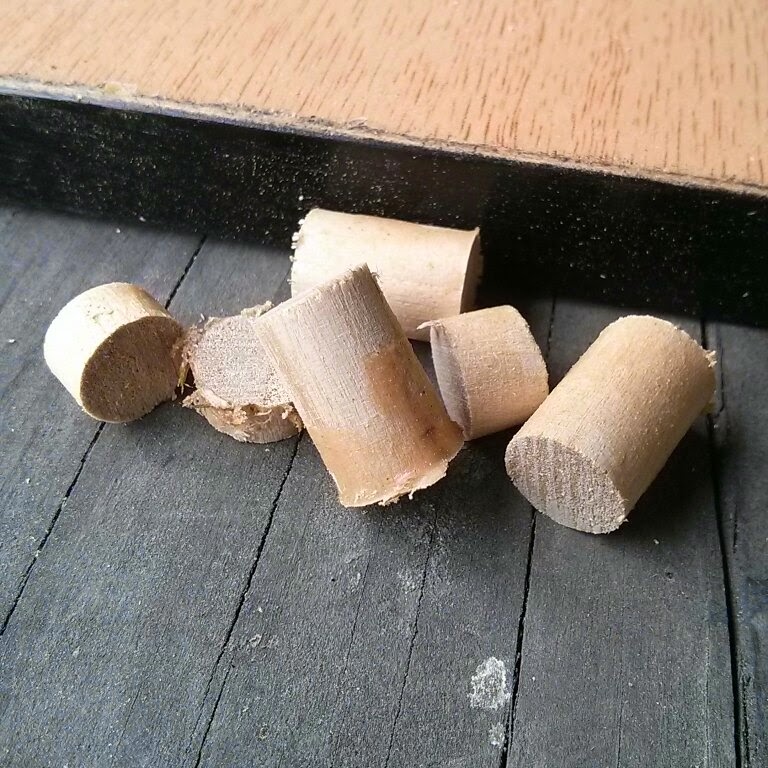 The dowels look better than just plain screws, now if I didn't get tear-out when drilling out the dowel holes, I would have been thrilled with how it all turned out. 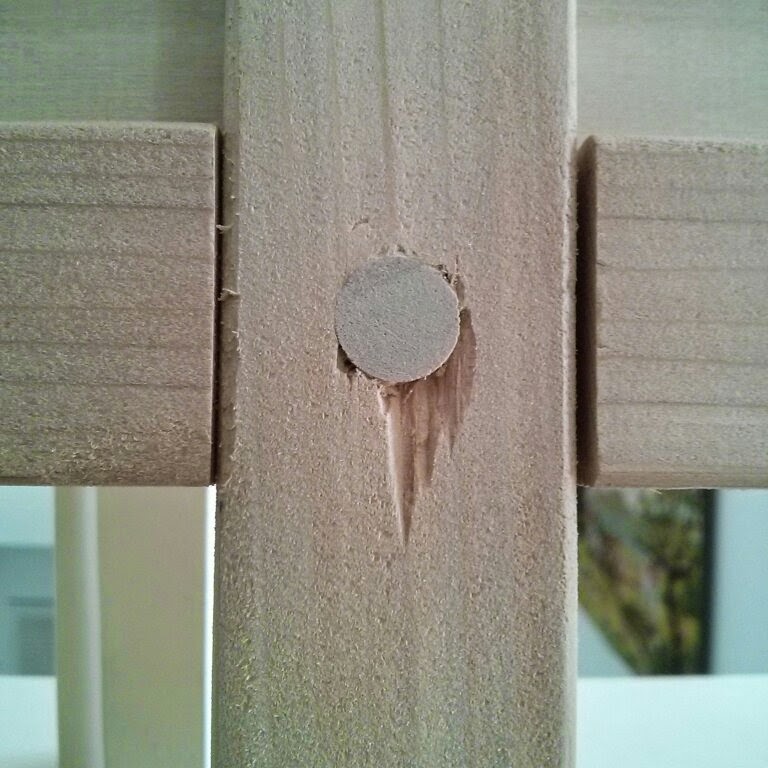 (Above: The curse of freehand drilling - the dreaded tear-out)

With the assembly complete, it's time to sand down the whole gate, and get it ready for many coats of finish, and then the final installation of the hardware and the gate.