This is it folks, the final build post and this project is finished! But what did it take to get there?

For the base/legs of the desk, I discussed a few options with my girlfriend and we landed on the somewhat popular iron/steel pipe legs. I had seen them used in a few places and always liked how it was a marriage of hard and soft, metal and wood, light and dark, and I was curious how it would work out, and what the technical aspects were to making it happen.

To start, I needed the pipes, unions, nipples, flanges, etc... the tricky part was deciding between 1/2" and 3/4". Due to pricing and availability of materials, the obvious choice was 1/2". After a trip to Home Depot, I had most of the materials needed to get started. 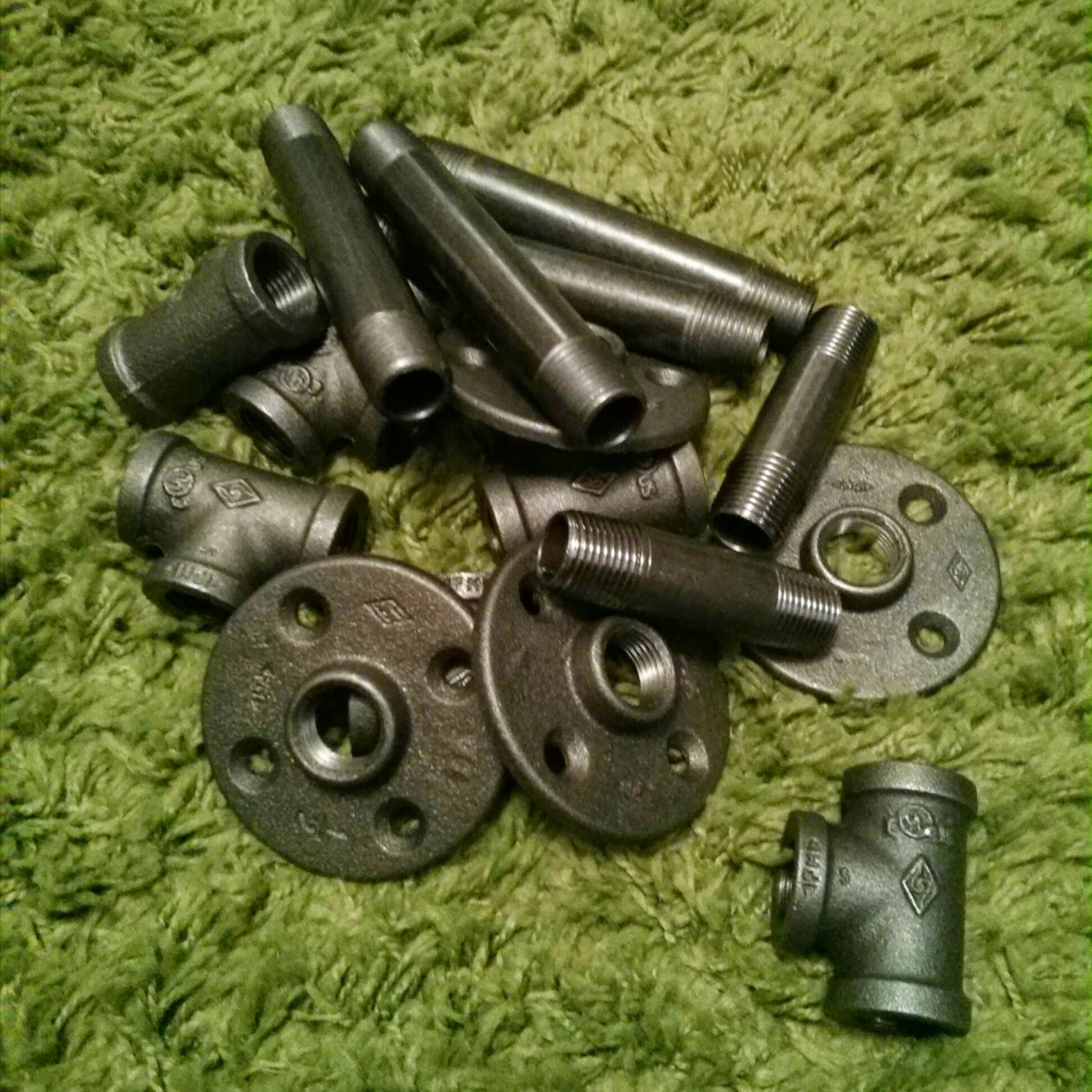 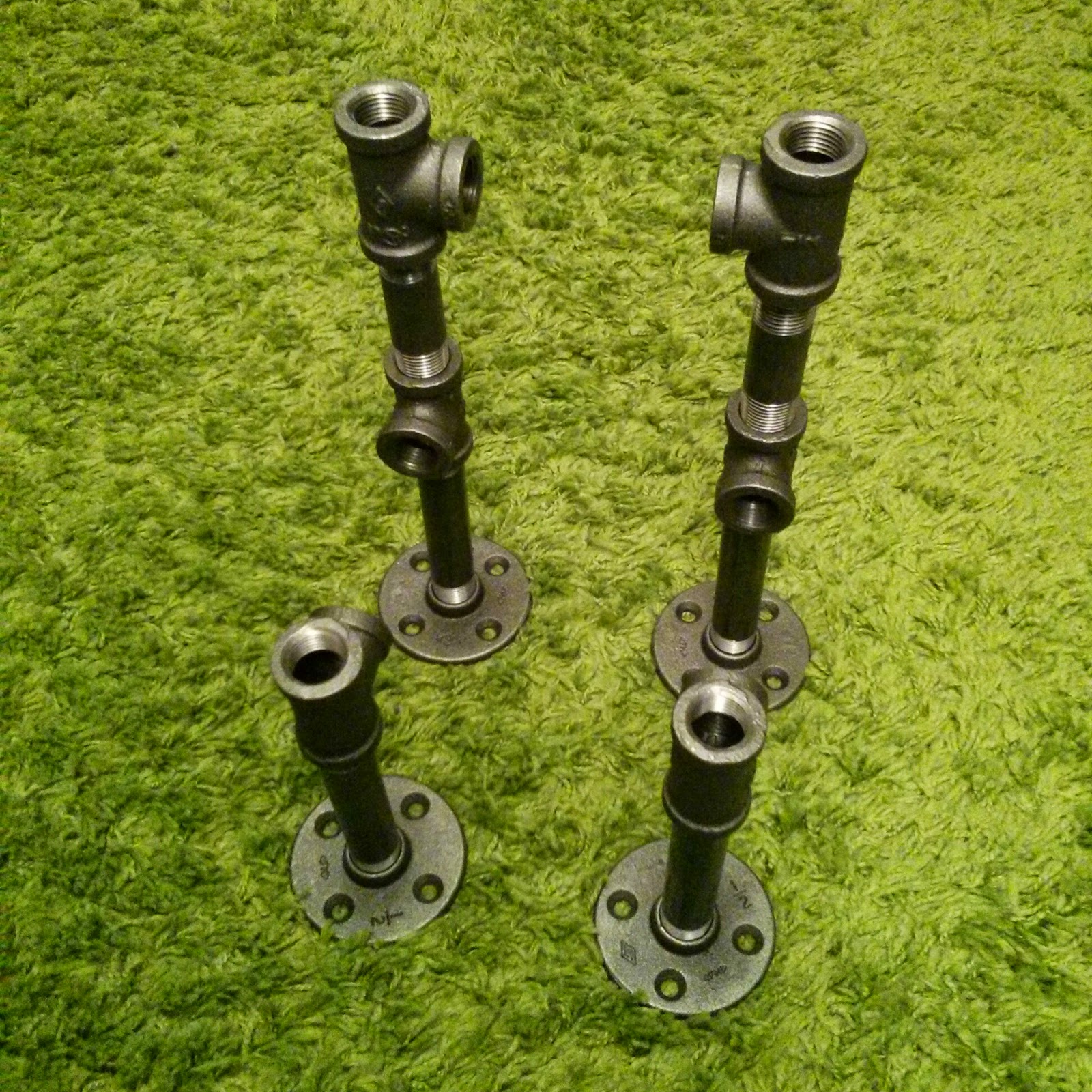 With a portion of the legs roughed up, I could get some more measurements and plan for the additional pipe I would need to purchase.

For some reason I had thought that the folks at Home Depot had the facilities to cut custom length pipe and even thread it. Boy was I wrong. They did not, so I had to buy the closest approximate lengths of pipe. I was kind of furious at this point, since I didn't plan for this. 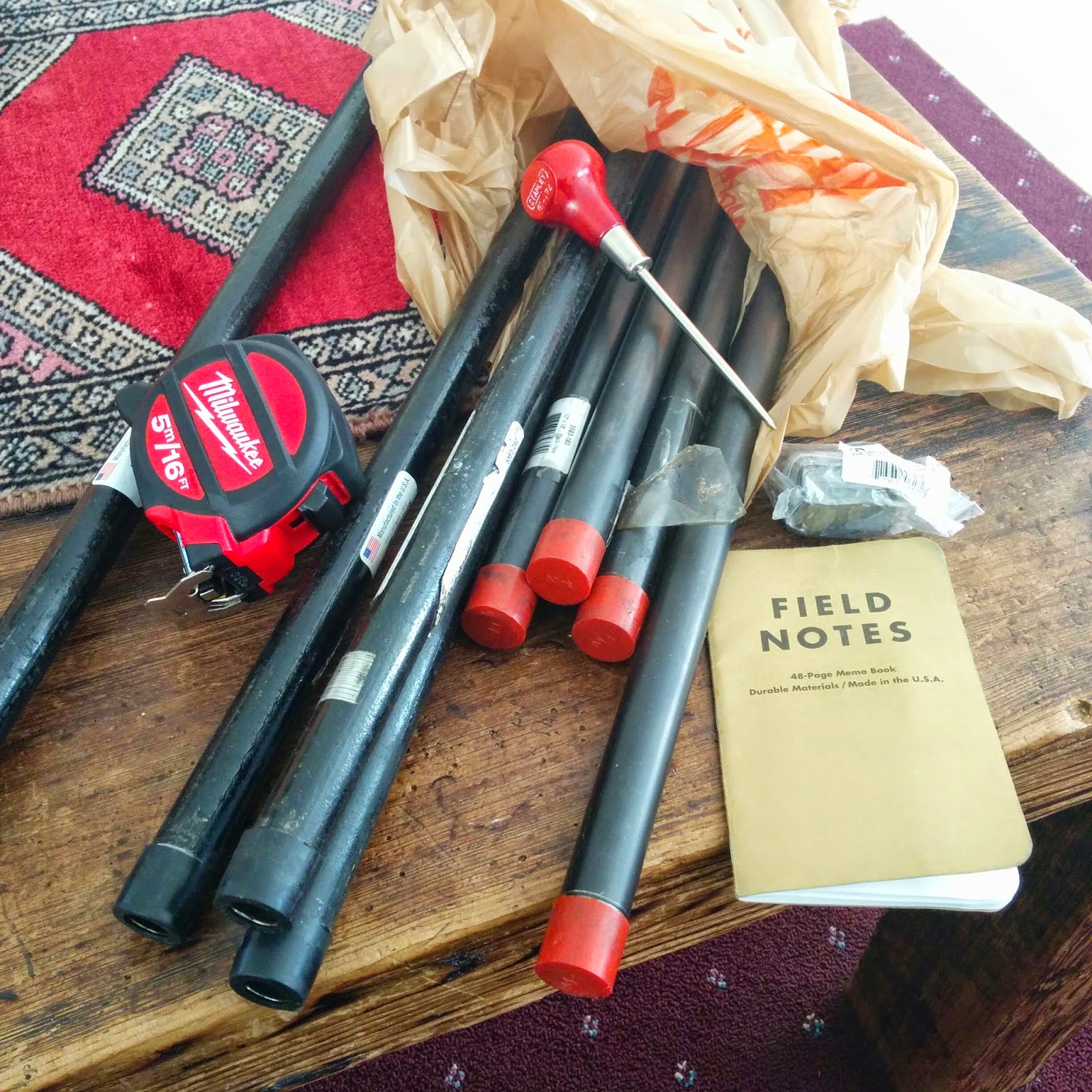 After getting the pipes, and some time with the tape measure, I sketched out the general plan and finalized lengths and required cuts. Six pipes needed cutting, which wasn't too bad - all things considered. Knowing what I know now, I would have mounted the inserts to the underside of the desk after the fact. 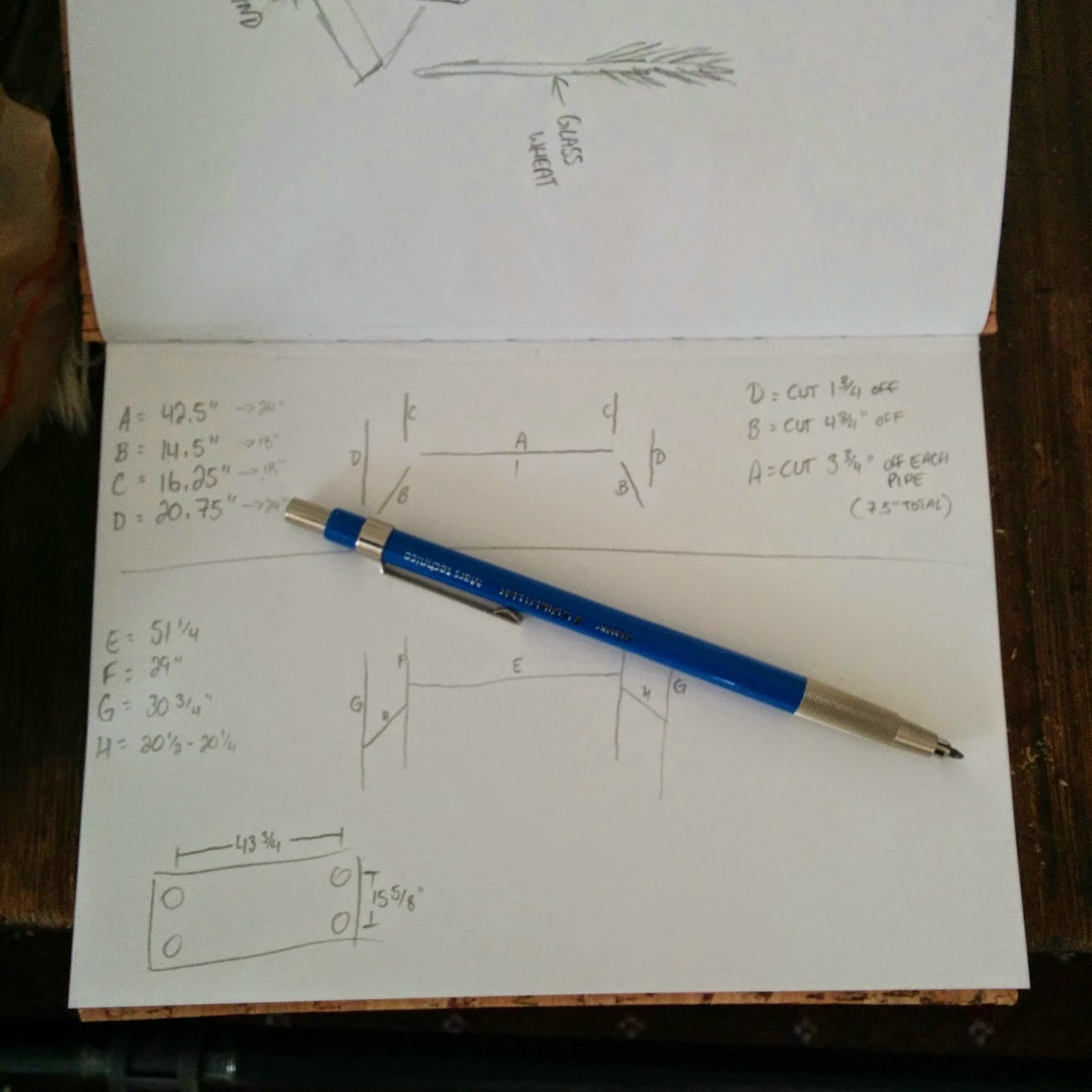 With a cut list done, I made use of my Dad's workspace. It's older than me I think. But it has a sturdy bench, and an even sturdier vise. This was perfect for the work I had ahead of me.

So with a coarse hacksaw blade, and loads of blade tension, I began to make all my cuts - which was a lot of work as I suspected. I could have used a sawzall and a metal cutting blade, but that's likely to cause a lot of inaccuracy. 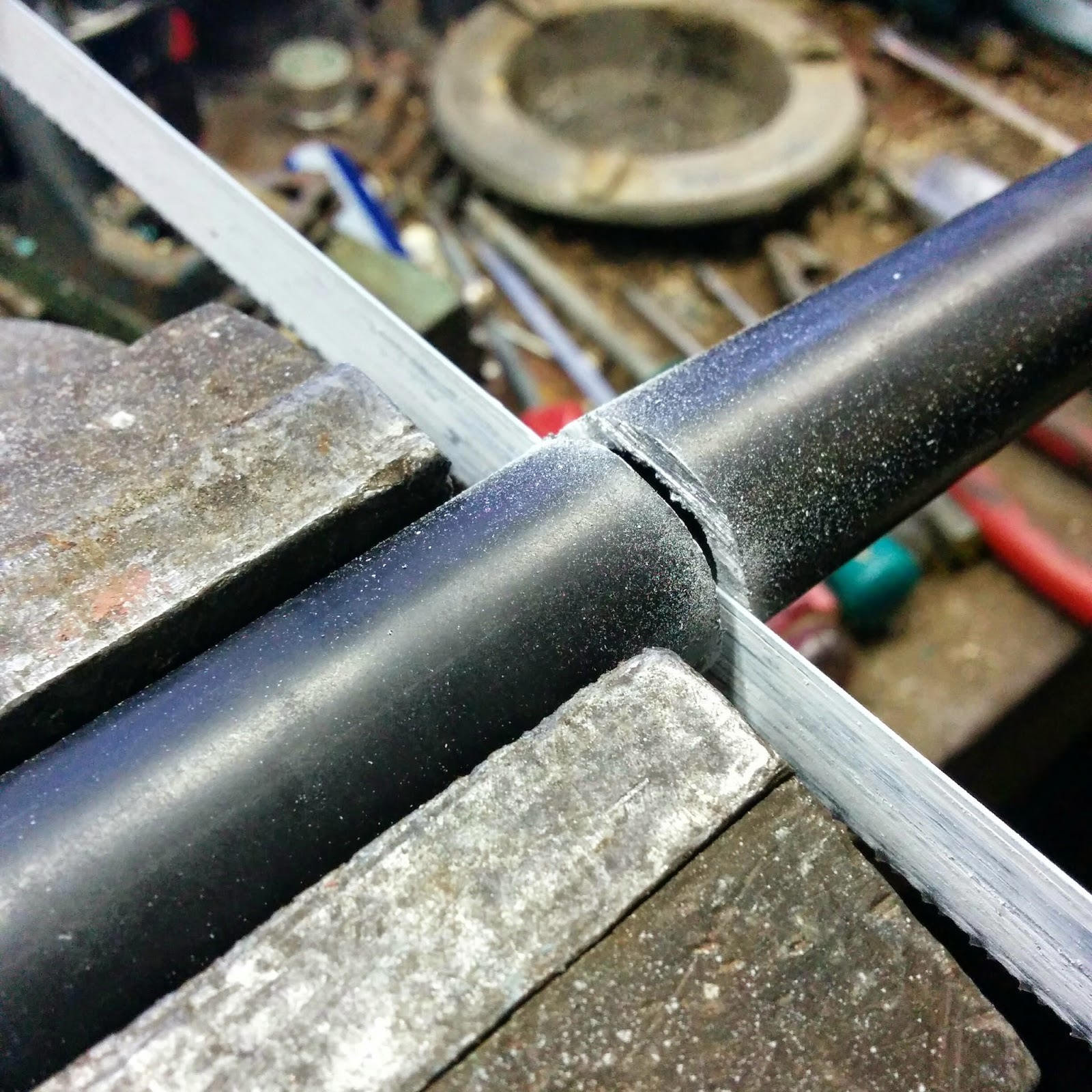 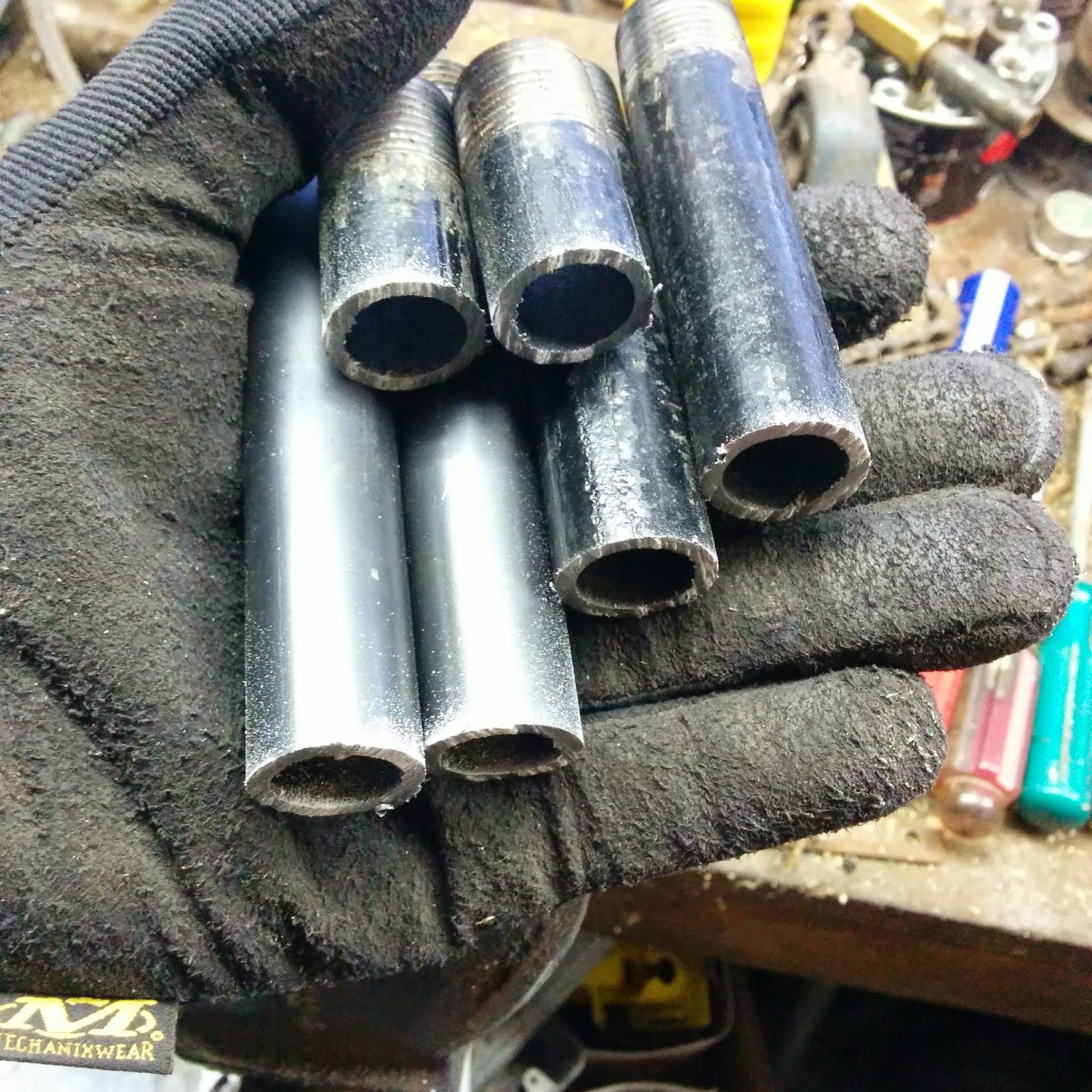 Six pipes cut, and it's on to getting some new threads cut. This started with de-burring the pipes - and I would later find out that I would have to file into the ends of the pipes quite a bit to get the thread cutter started. 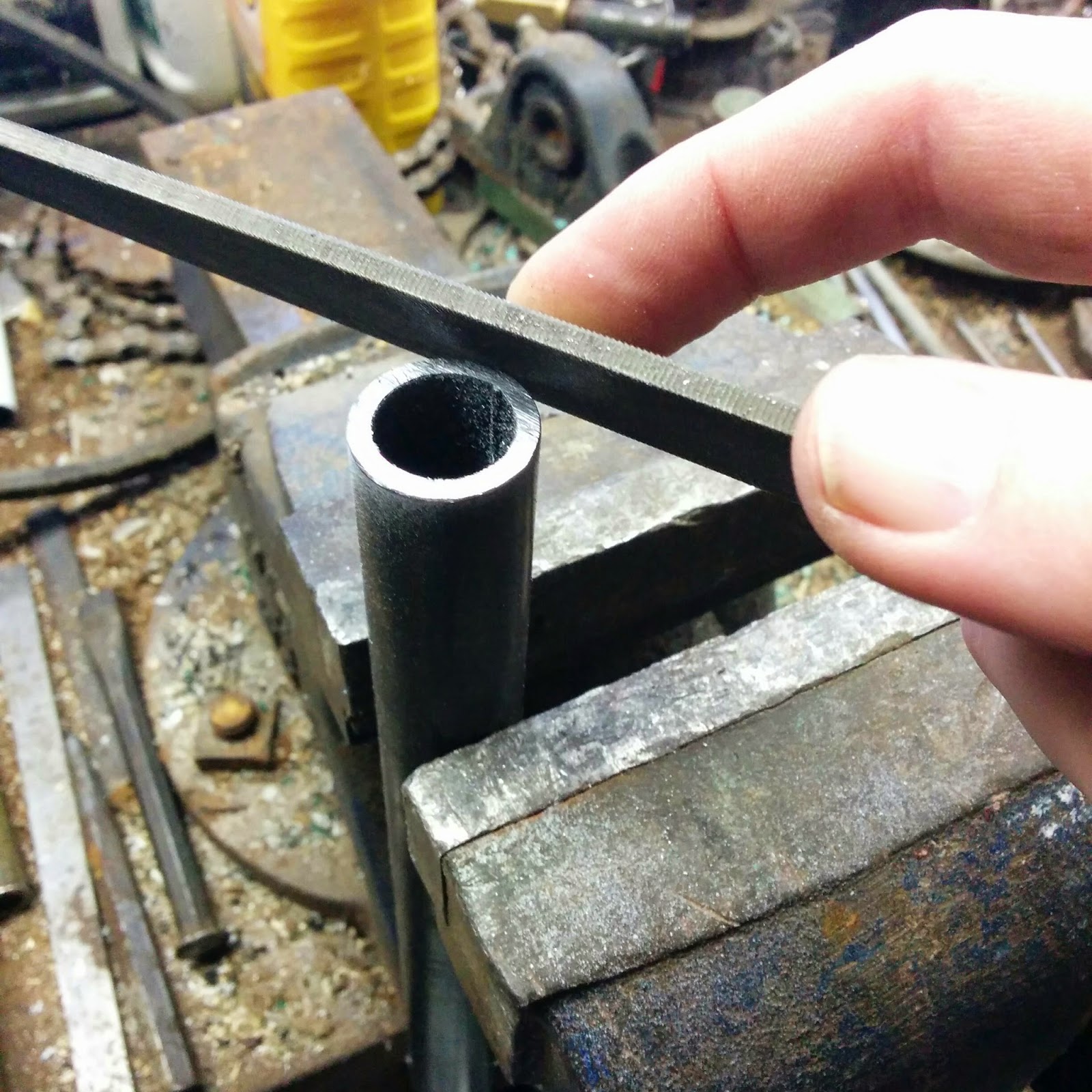 The pipe threading was interesting, had a tough learning curve, and I had to break out the serious tools... which my Dad luckily had. I swear that man owns every tool imaginable. The pipes started to slip when I was using the bench vise - and surprise, my Dad owned a pipefitters stand, which had better clamping and leverage for the work ahead of me. 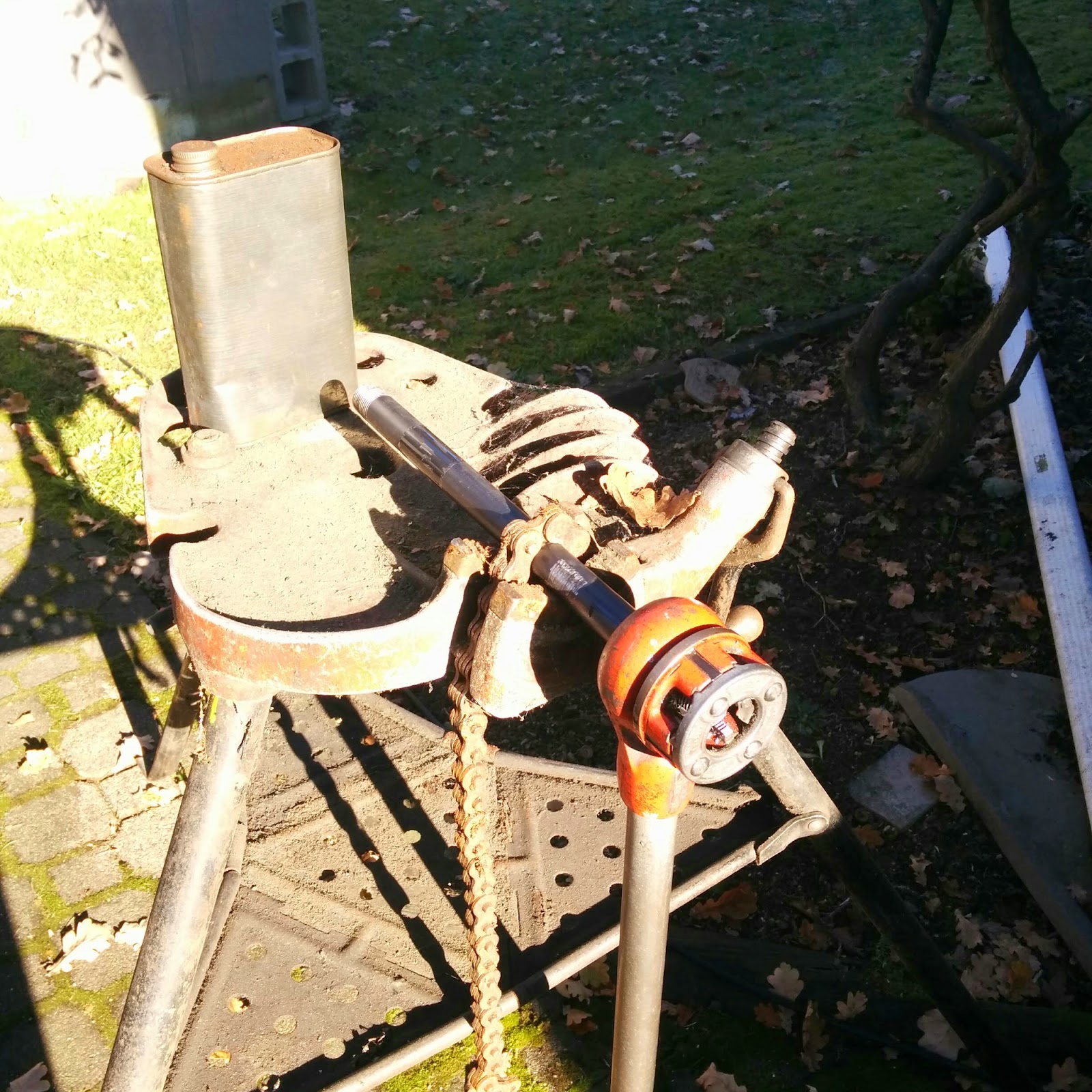 After a lot of trial and error (and even more cursing, and sore muscles) I had the new threads cut and cleaned up. But as you can see, I had excess file marks on the pipes, which looked terrible. 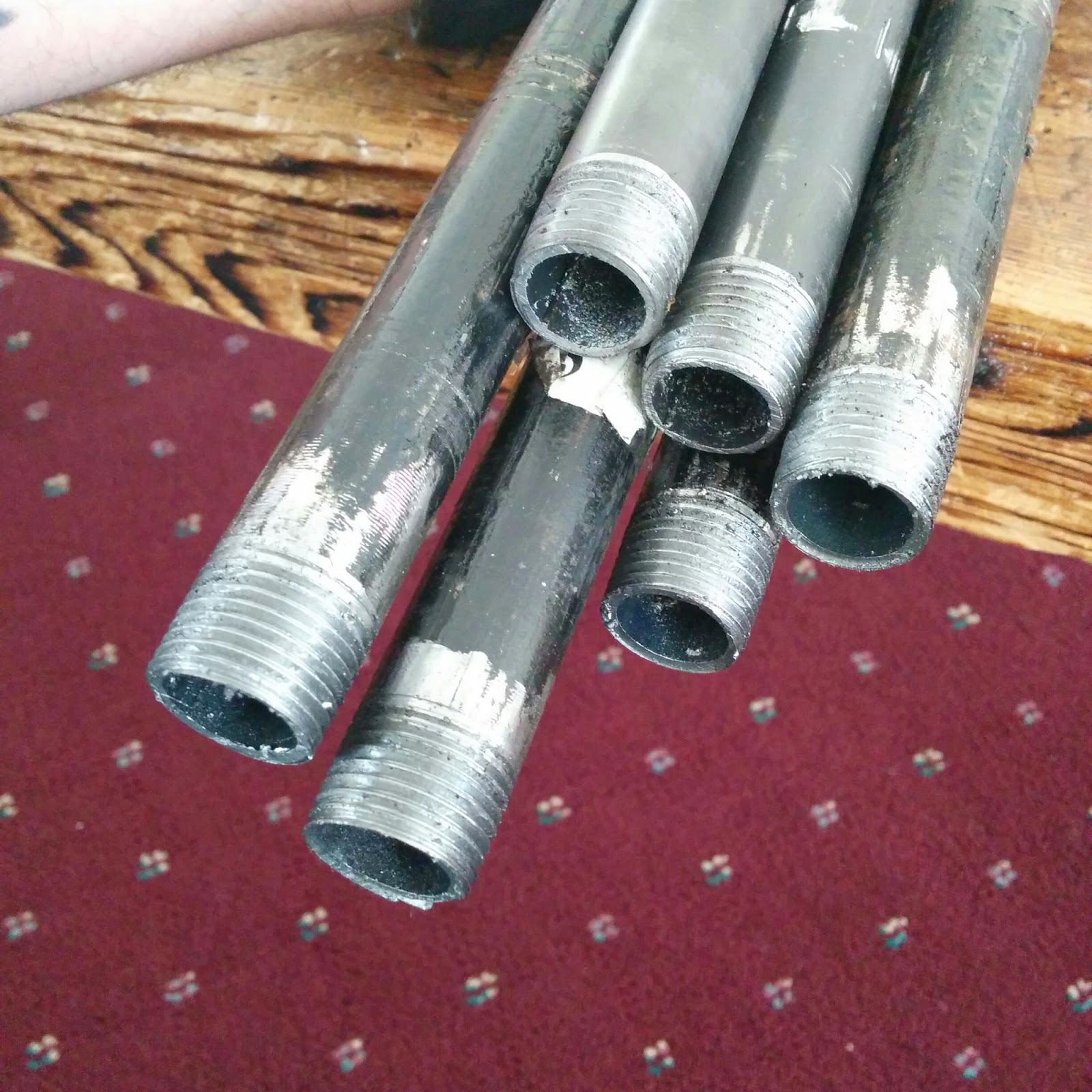 Since the coating on the pipes were inconsistent from one manufacturer to the next, I chose to sand off the coating for all the pipes, and clean up the file marks I had made. This proved to be a very long and messy and strenuous job.

The end result on the other hand, was some decent looking pipe. But now they were too bright. Of course, now I had two issues... first - the pipes definitely were too bright, second - the table is a bit too tall... almost 2 inches too tall. 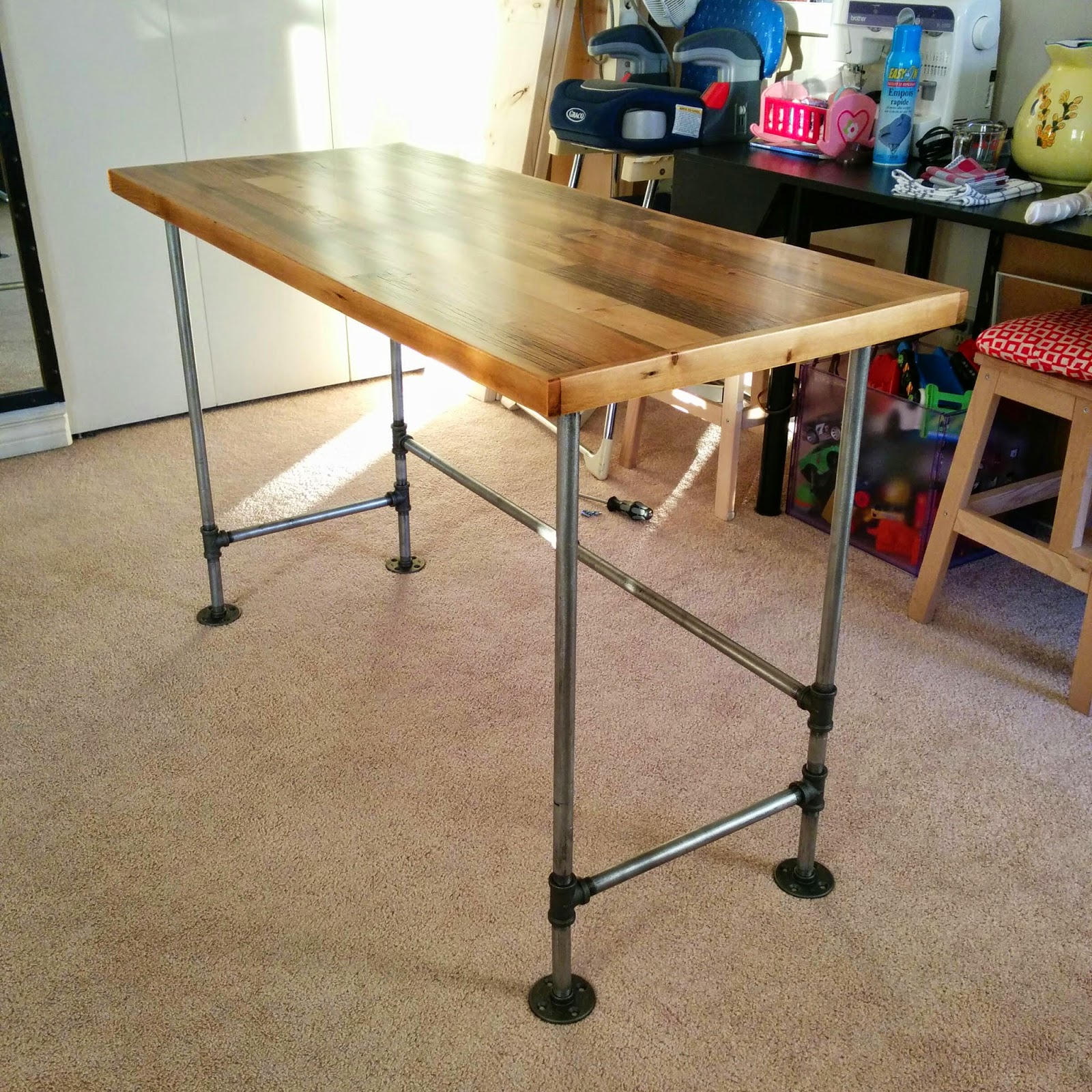 After showing the desk to my girlfriend - she was happy with the height, and the color of the legs - so I can keep things as they are. Now it's a matter of finishing up a couple small details.

The metal flanges are a bit rough, and can scratch flooring if they are left as-is. So that is one item that needs to be sorted out before final delivery. Another issue is the pipes might loosen over time, which could cause a serious wobble. I want the desk to feel solid, so this is also something I will need to figure out.

For the flanges that touch the floor, I searched Home Depot for some felt padding. I found sheets of it that would require cutting, which would not be ideal. My girlfriends keen eye found some 3" diameter round felt pads. We walked them over to the plumbing aisle and confirmed they fit the flanges - they did - so that was an easy purchase. One final item on the shopping list was some Loc-tite red.

Installing the felt pads to the flanges was a simple affair. I cleaned off any residue from the metal with some solvent, then heated up the flanges and felt pads with a hair dryer - and stuck the pads on. 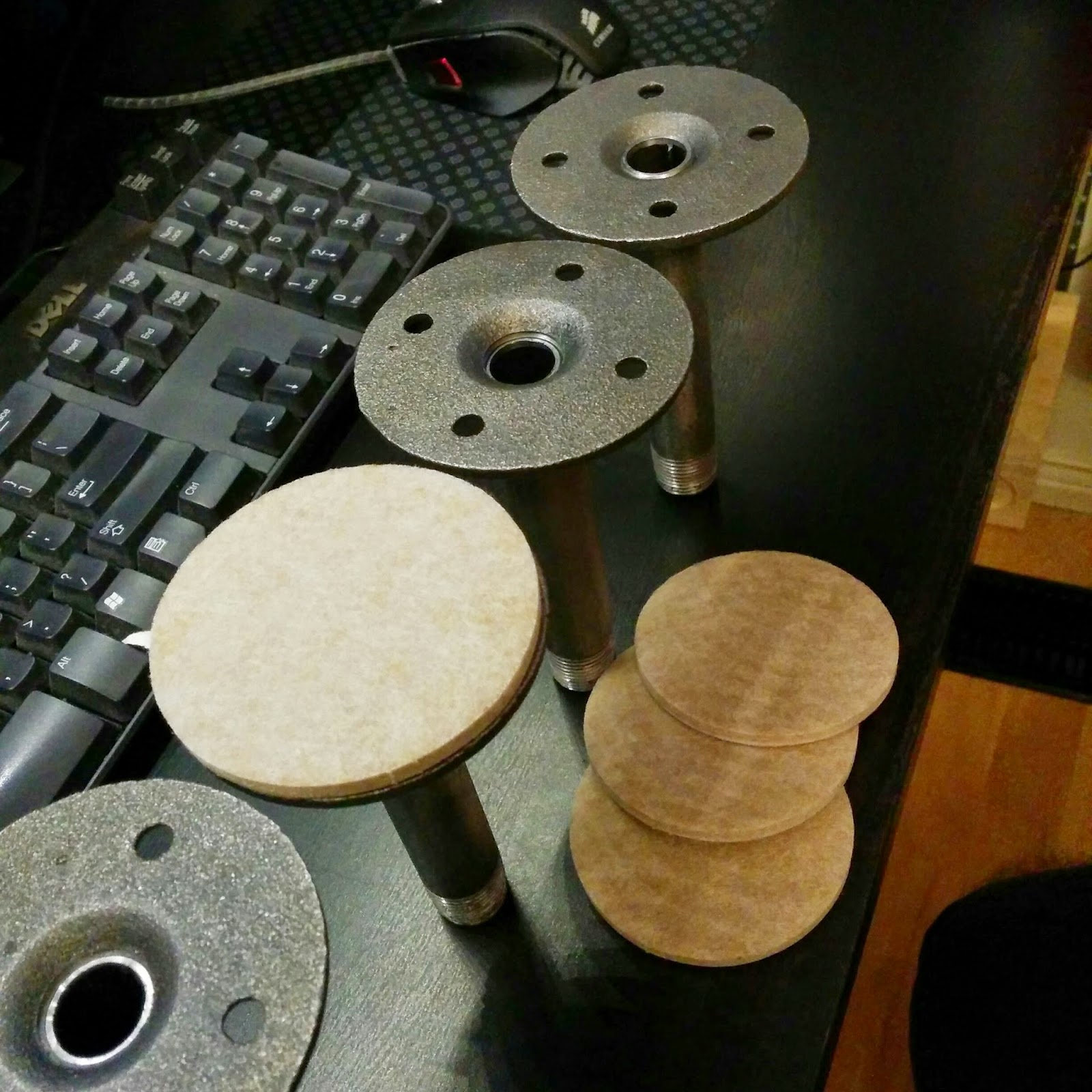 (Above: Talk about luck, that fit is perfect)

And the final step - taking apart the whole desk frame - and treating all the threads to some Loc-tite. I treated almost all the threads to the Red Loc-tite, so they wouldn't move - however I wanted the feet to be a bit adjustable in case the floor isn't level, and the back bar/brace would need to be removable as well. In this case I would use Blue Loc-tite on those threads. 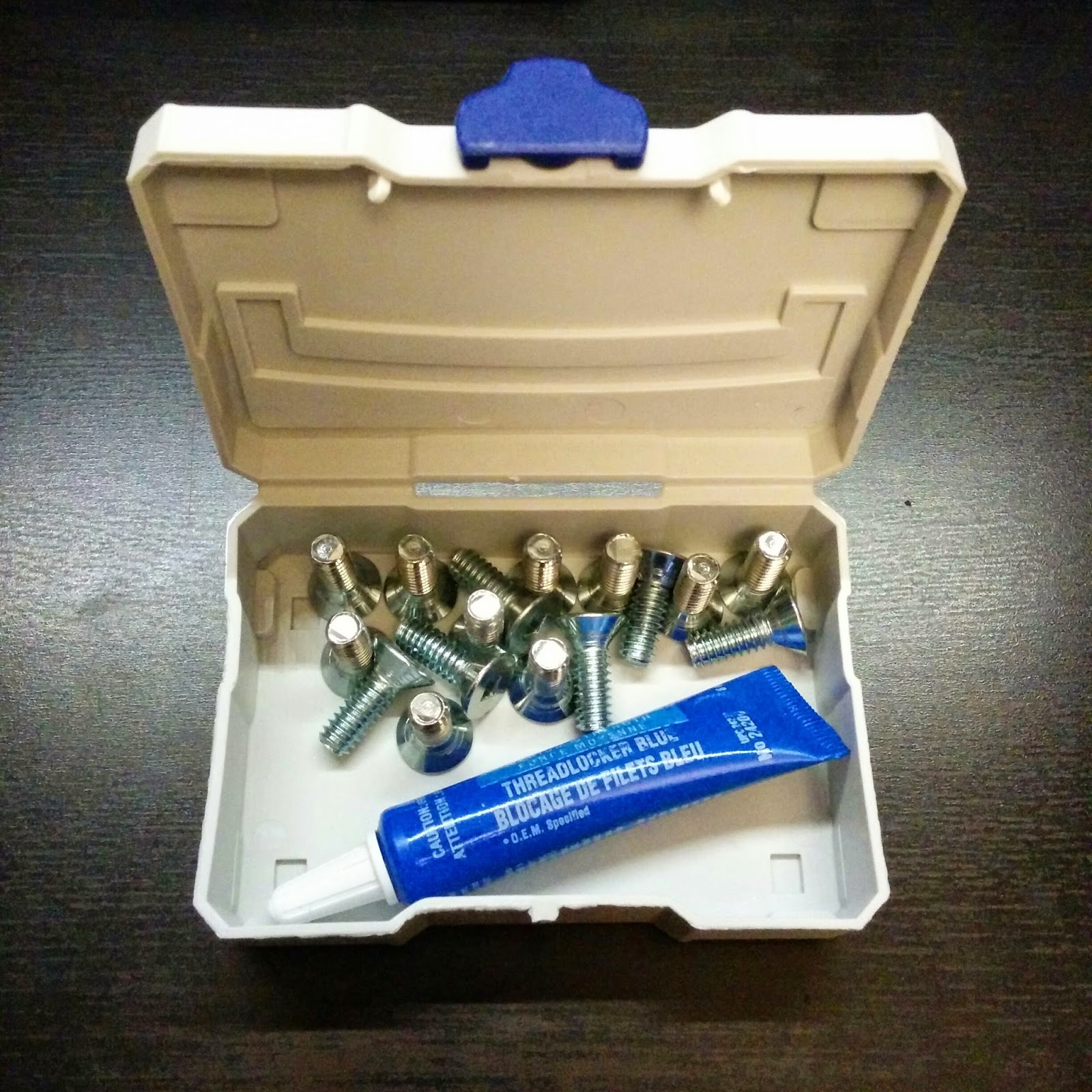 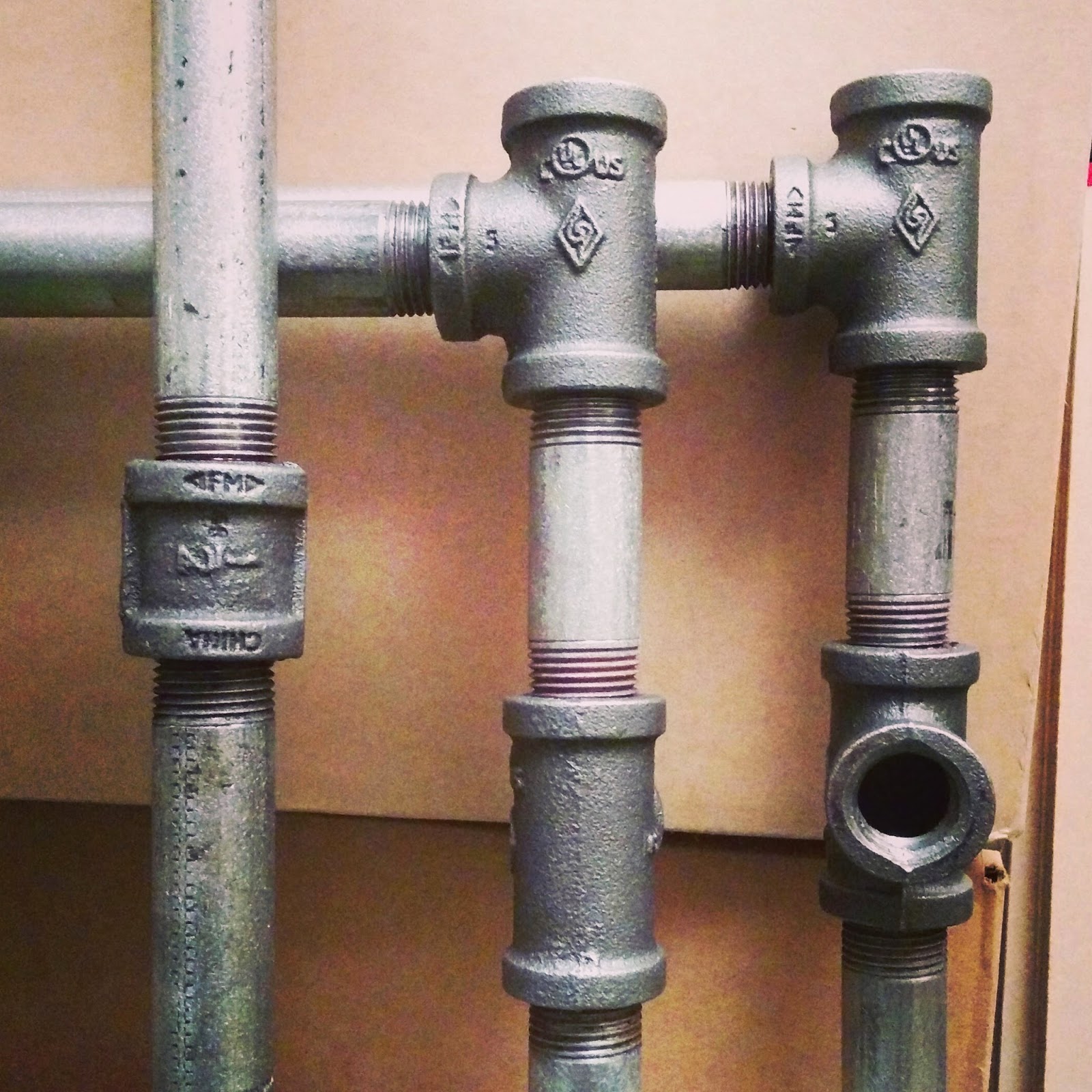 Once everything was secure, the desk could be brought over to my girlfriends place, reassembled, and enjoyed. I designed it in a way where it could be easily packed and transported - like Ikea but not as flimsy as most of the things from Ikea. 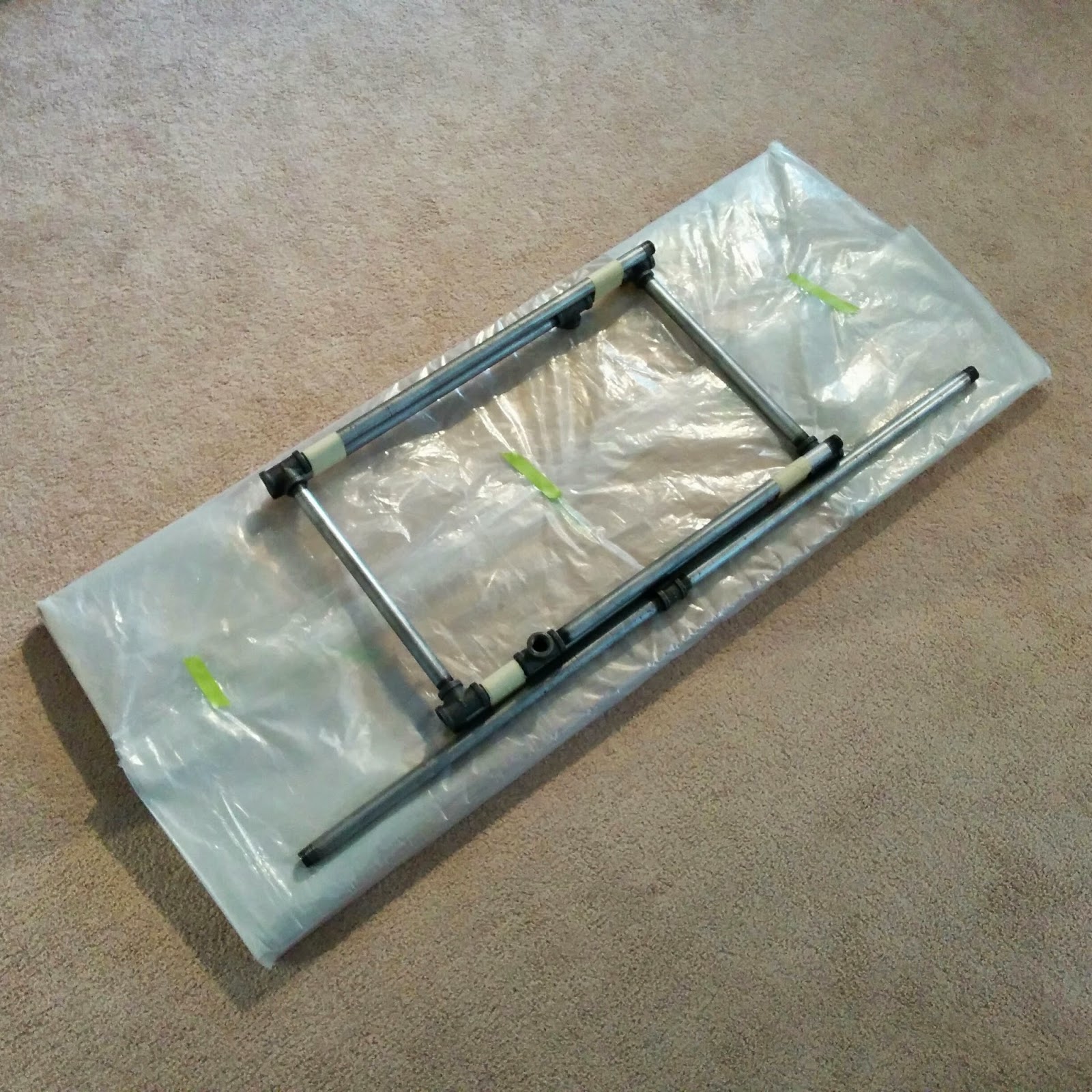 (Above: Packed flat and ready to transport)

Getting the desk to my girlfriends place was a simple affair, then I unpacked it and put it together. I used a "90" (ish) degree adapter on my drill to feed the mounting 1/4-#20 screws in most of the way, and I gave them a final tightening by hand afterwards. 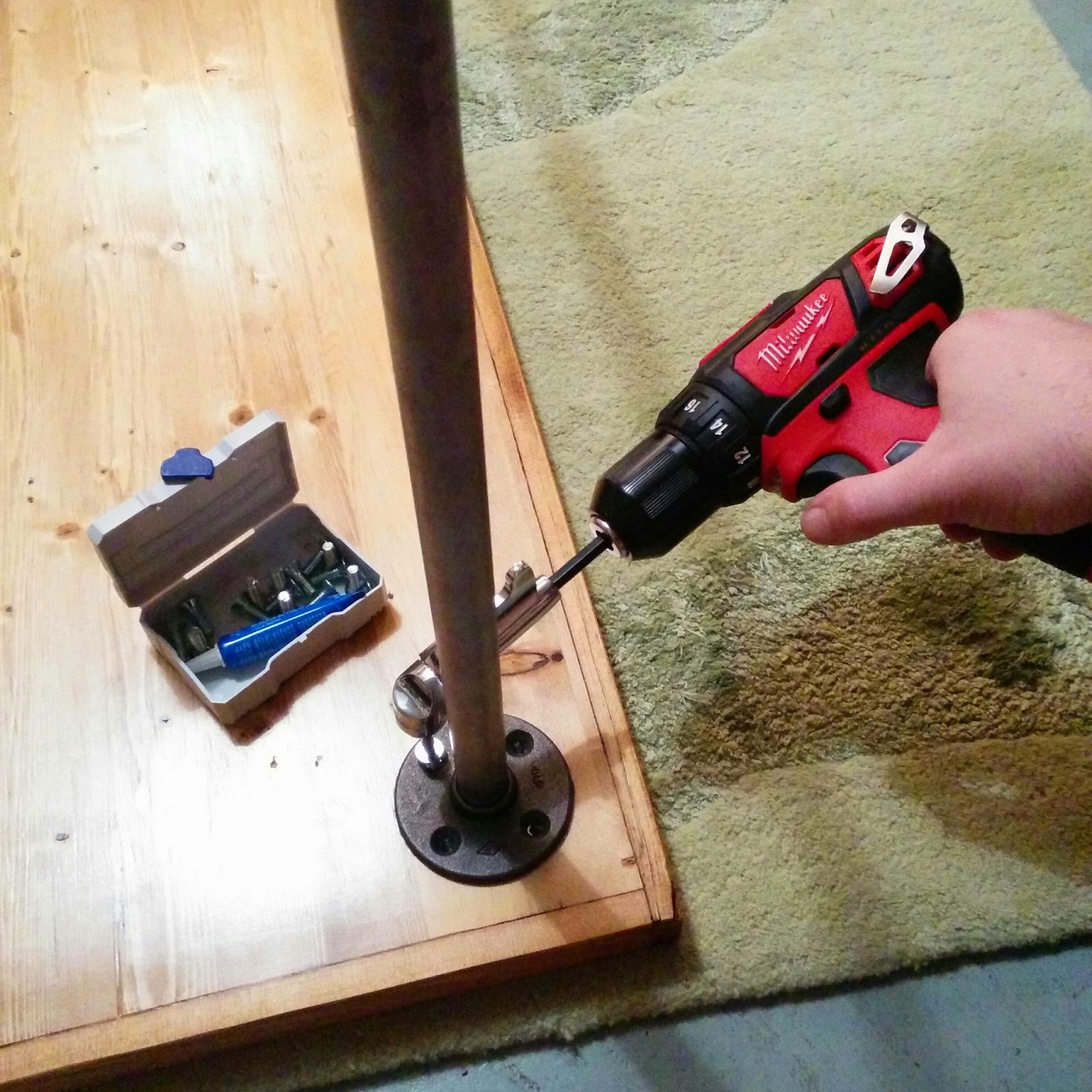 (Above: I used a drill because I'm lazy)

And here is the desk all set up and in it's final resting spot. The floor was very out of level since it's a basement suite, but the great thing about using pipe and flange legs - they're adjustable, so I was able to get the desk leveled up easily. Thanks for following along, I hope you enjoyed reading about this as much as I enjoyed building it.