Everyone buys something at Ikea at one point or another. Their stuff is cheap, looks good, 'relatively' durable, and can be hacked for the most part.

The "Ekby Valter" bracket is one of those Ikea items that gets hacked a lot. Usually into the form of a mount for pendant lighting, or variations on shelving.

Here's how it looks normally: 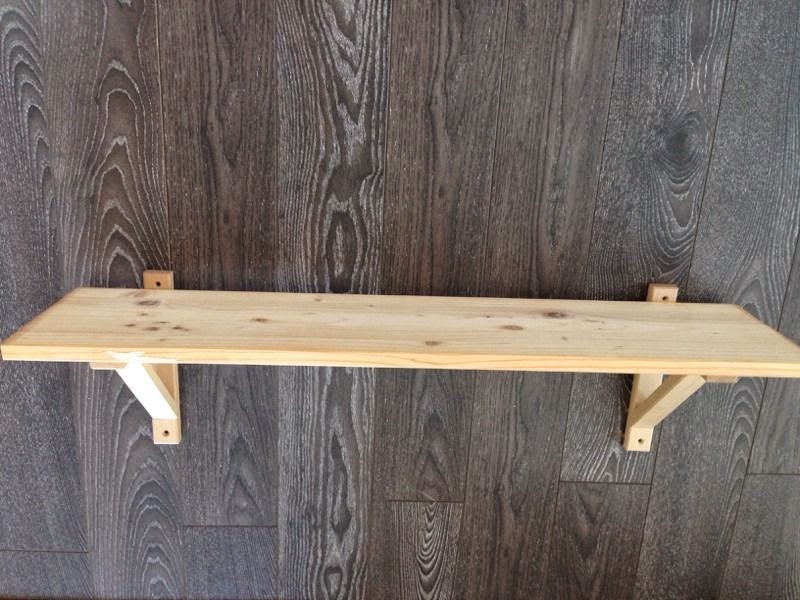 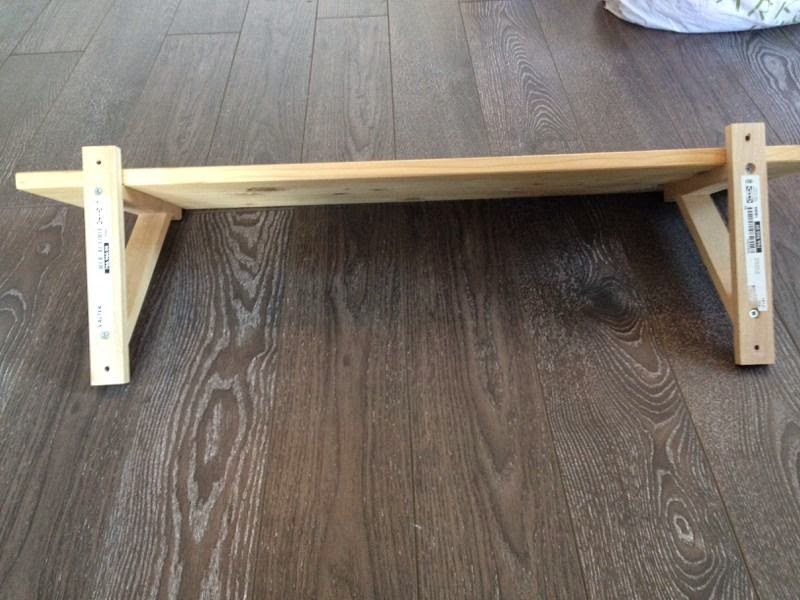 For the most part, that shelf is totally fine. Except, the boards they sell you don't span over more than 3 stud widths. Their longest board is just a bit shy of 4 feet. Irritating to say the least, since most studs are 16" center-to-center - and there's no way I'd use these brackets in just plain drywall.

So in order to get these to span a wider distance (roundabout 8 feet or so) and to make them more secure by mounting the bracket into studs... and lastly to make the shelf strong and secure (the boards Ikea sell are pretty thin, and I plan to put a decent amount of weight on my shelves)

I started out by locating the studs, and mounting the brackets. I mounted them 20" down from the ceiling, which is a decent height for the shelves, and keep things 'up and away' for the most part. 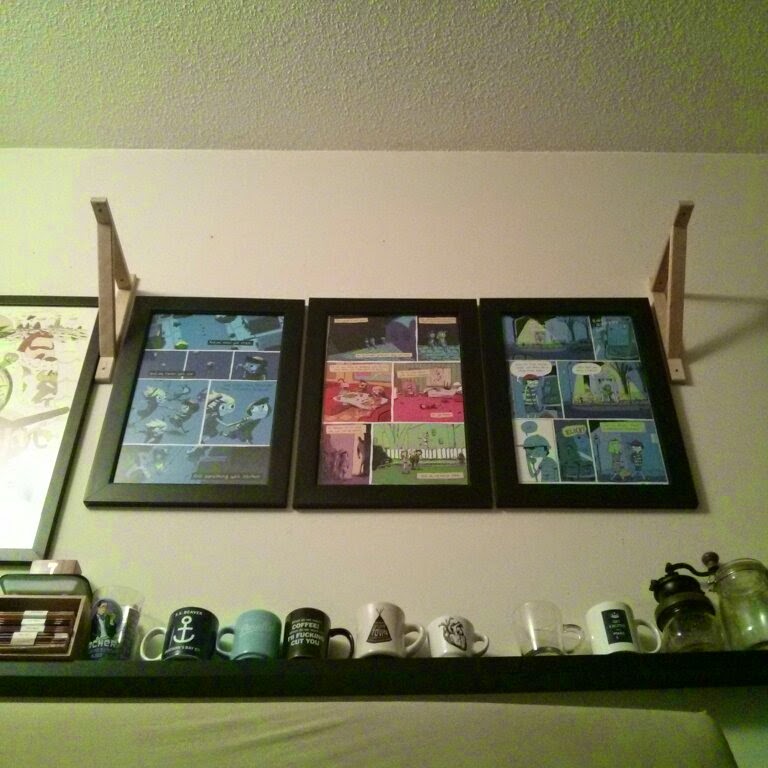 Once I had the brackets mounted, I placed the rough cut 2x12 on top (it was a bit over 8 feet in width - 98" overall or so), and I scribed where the bracket faces meet the shelf board on the bottom. 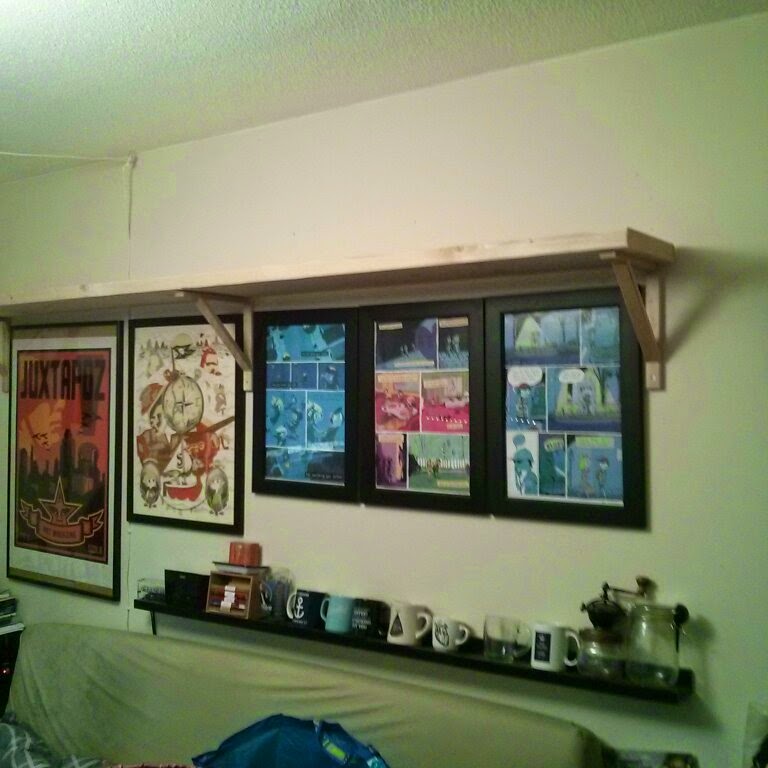 Next I set up a 'poor mans dado' jig, which is a circular saw and two boards/guides clamped on to the correct dado width. Passing the circular saw over in small bits to remove as much wood as possible, and then cleaning up the dado by hand later. 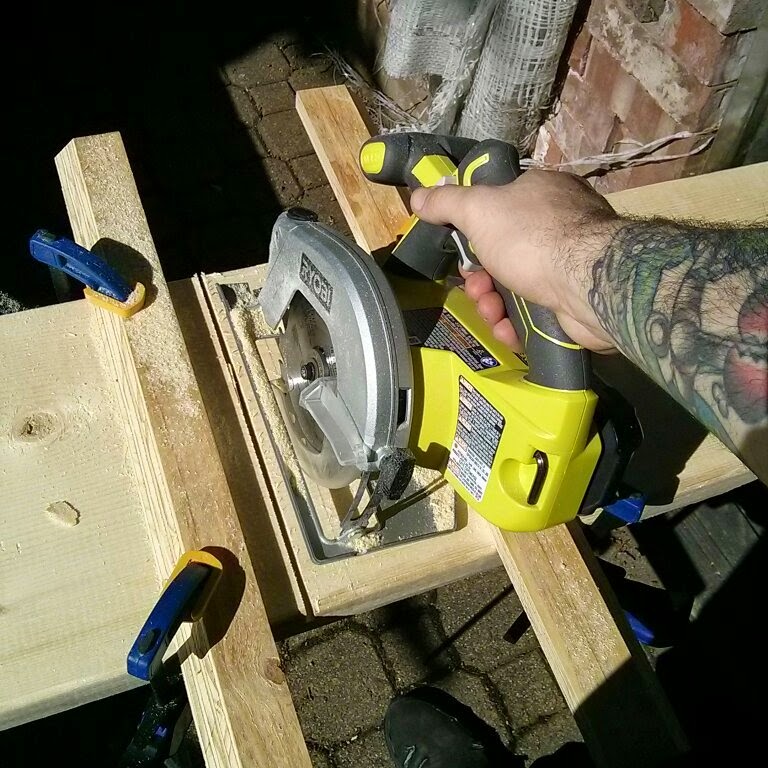 After some rough chiseling and filing, the dados were looking pretty fair. They don't need to be perfect looking, they just need to be flat. 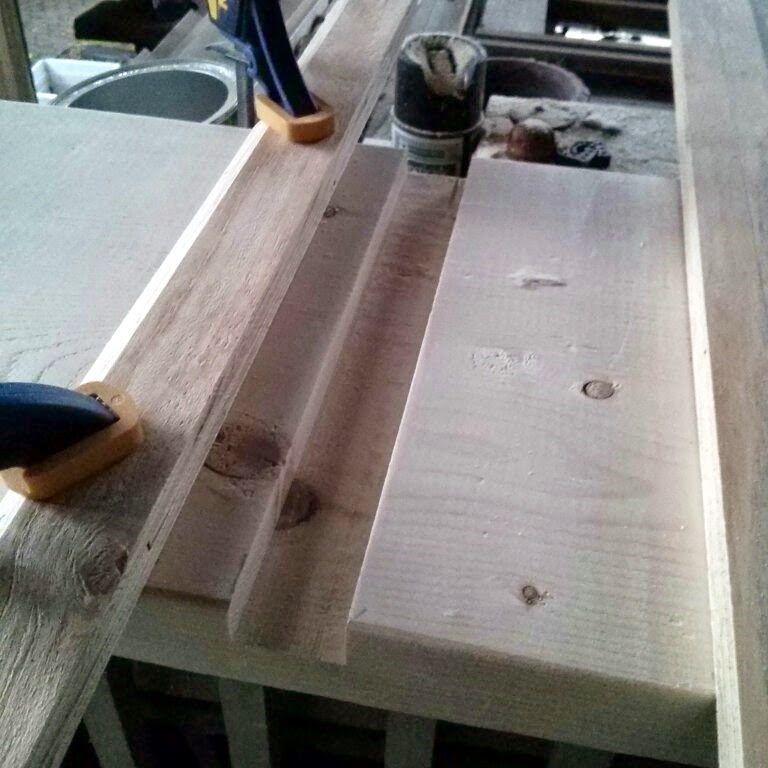 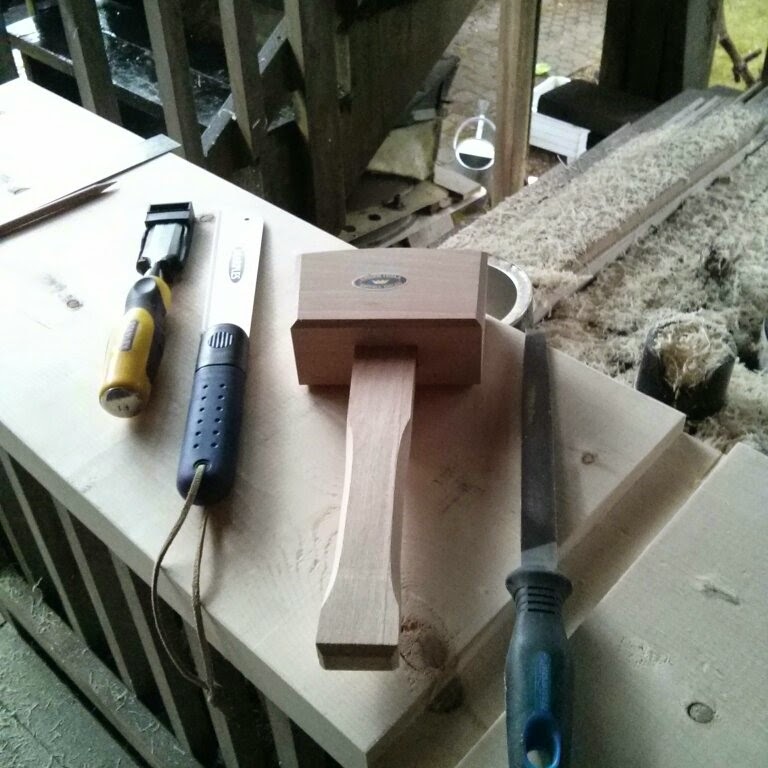 Once the dados were cut, it was time for a test fit, and hope that everything still lined up correctly... 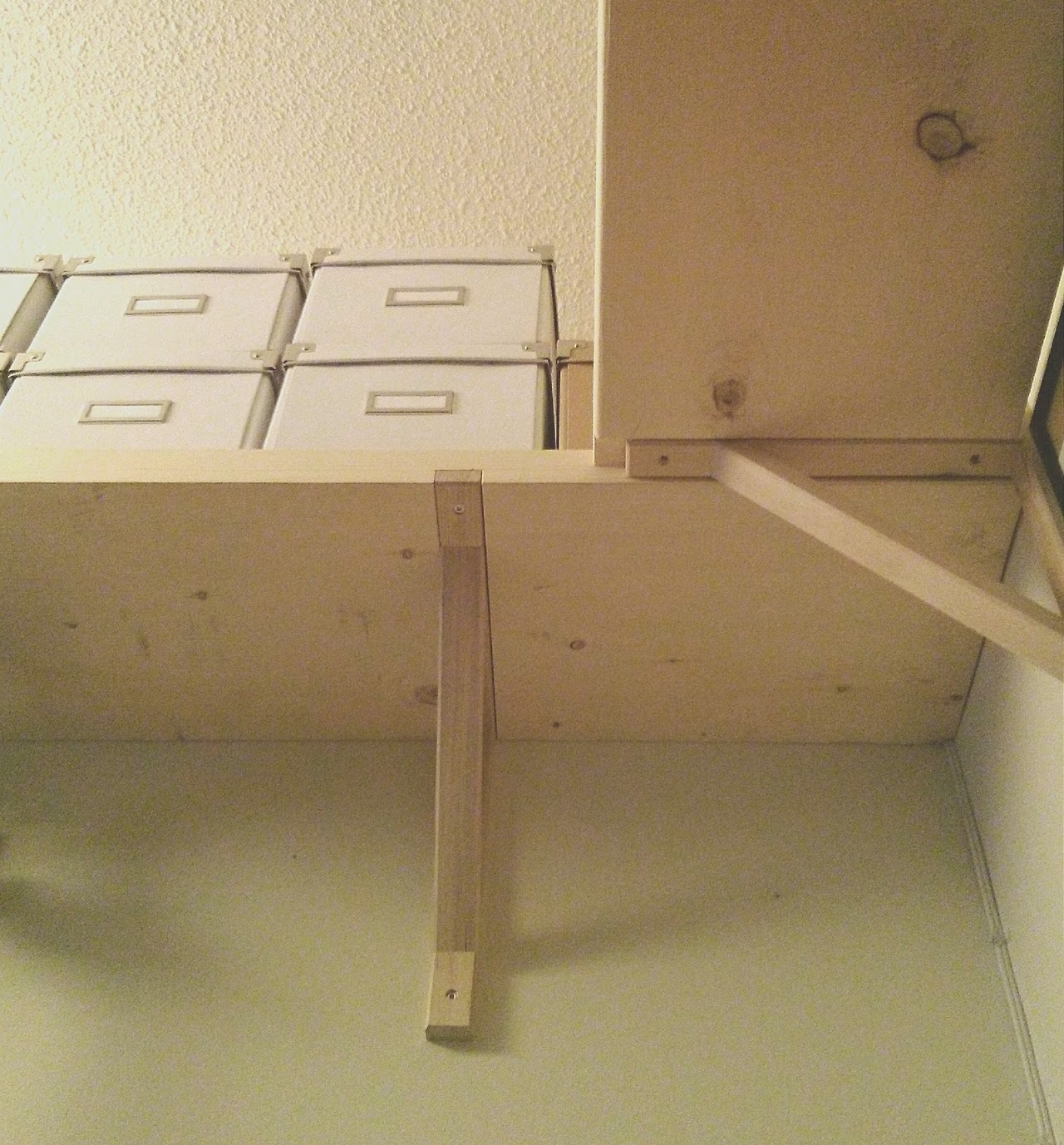 (Above: Nice! All of the dados align correctly!)

The next step was to flatten the roundovers, since I used cheap framing lumber, they always come with the corners rounded, and I frankly don't like the look. Also by planing them off, it reduced the depth of the board to the same depth as the shelf bracket arms. (Close to 11" deep) 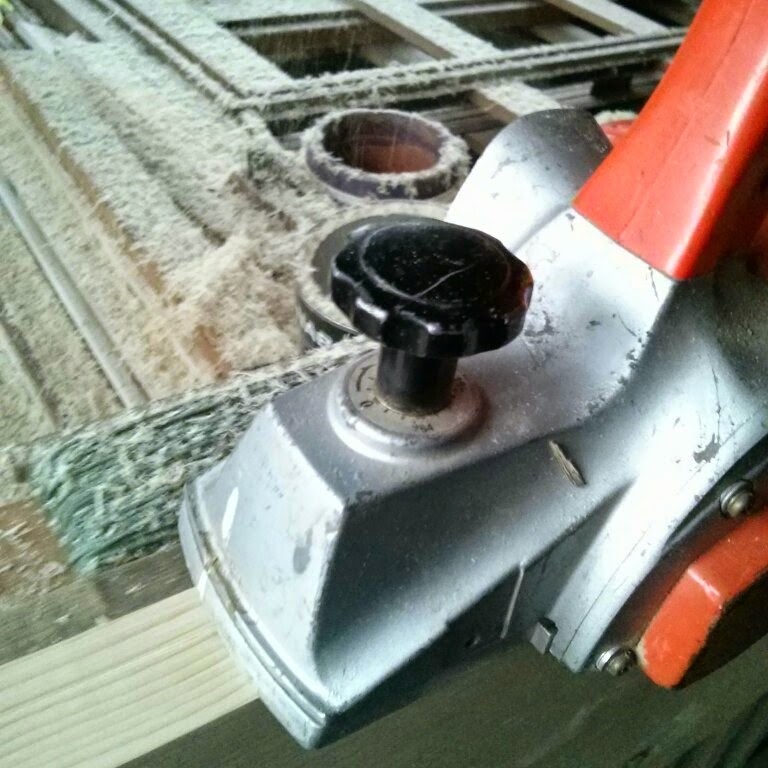 (Above: Luckily I had access to a handheld power planer, making quick work)

Another task that is hard to see in this photo below, was notching out 3/8" out of the back of the dados, to get the shelf to fit around the brackets against the wall.

At the back where the shelf almost meets the wall, is a slight gap, to allow extension cables to run behind it. Without the notch, the gap would have been close to 3/4", which was too much for my taste. 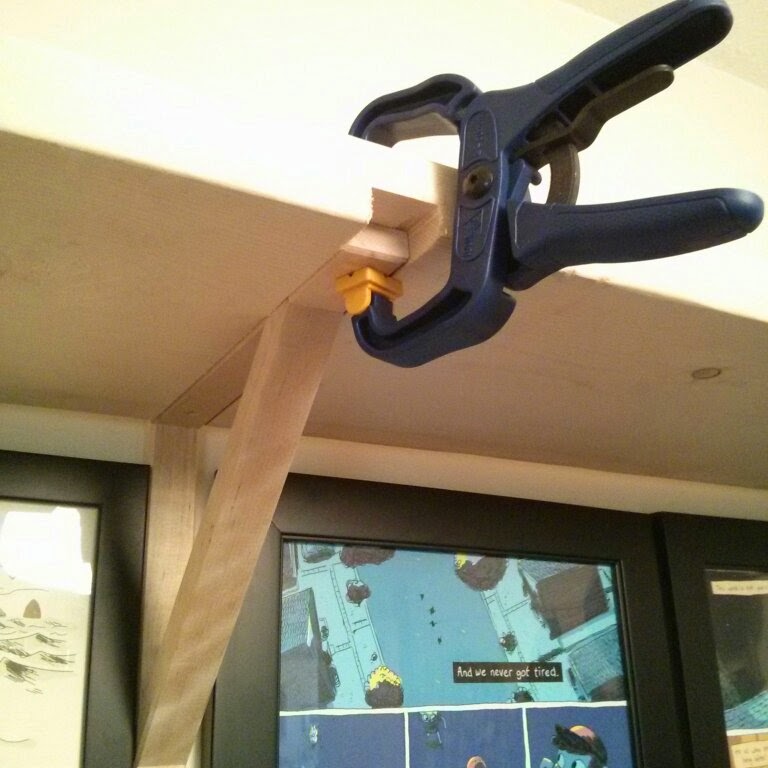 And here's the finished result! The shelves hold a number of storage boxes (I could stack them 3 high, but that's a bit too tall) - the shelves can support a good amount of weight, and because I used 2x12 lumber, are plenty thick and shouldn't bow with the weight. 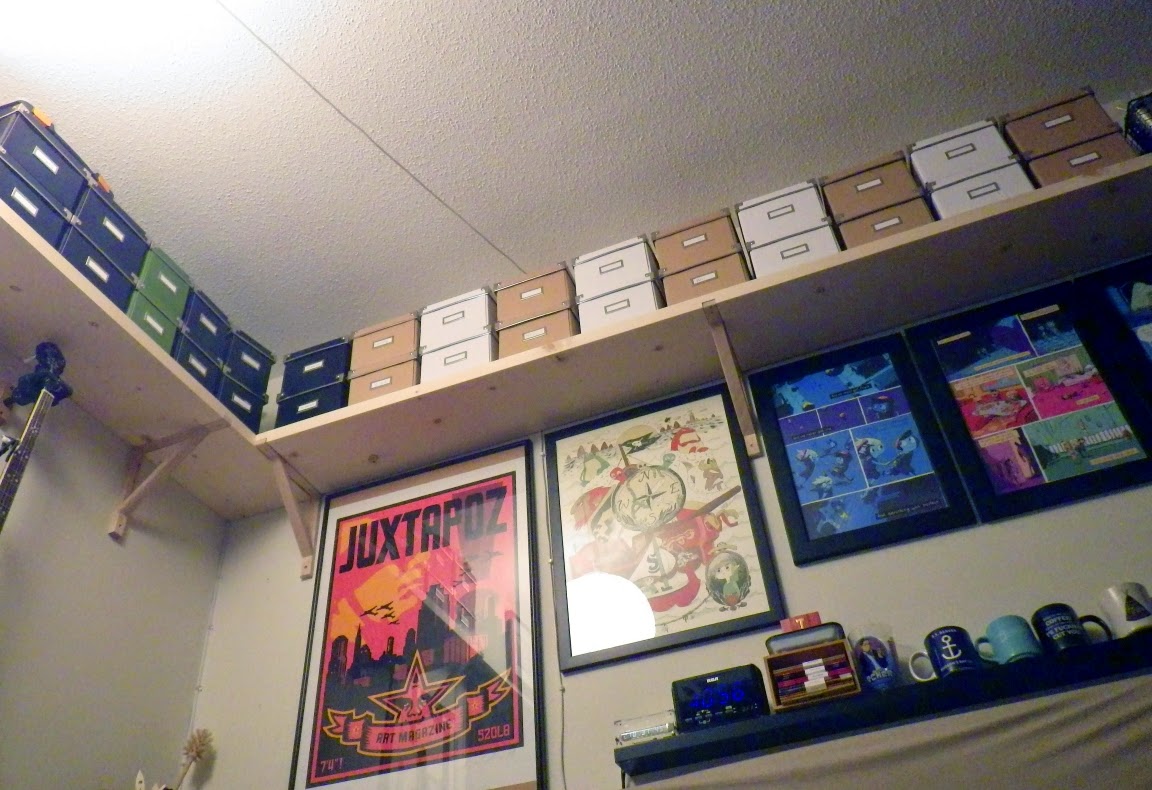 (Above: Click the photo to enlarge it for a better view)

I'm very happy with the way they turned out. I'm leaving them unfinished as I like the color of the raw wood, and they don't get much abuse so durability isn't an issue. AND they cost me less than the Ikea shelf boards would have cost to buy to cover the same span!