When we last left off, the desktop was still somewhat rough, but in a good state for finishing. Normally people don't much like finishing work - and I can understand why. It's a lot of repetitive tasks, and a lot of waiting. Sand, sand, sand, paint, wait, sand, etc...

With that being said, I got to sanding. I started with the usual 80 grit, to knock off the roughness and the epoxy residue off the top and bottom of the desk. Switching to 100 then 120 was a bit of overkill but it also provided a nicer transition between grits. I climbed to 180 grit, and finally settled on 220 grit. As for the carcass/bottom side of the desk, I stopped at 120 grit.

I felt the 120 for the bottom was smooth enough, plus it let me spend more focus on the top. One thing I like about sanding is once you get into a groove, it's almost meditative in a way. Either way, I enjoyed it (except for the hand sanding, I never like hand sanding) 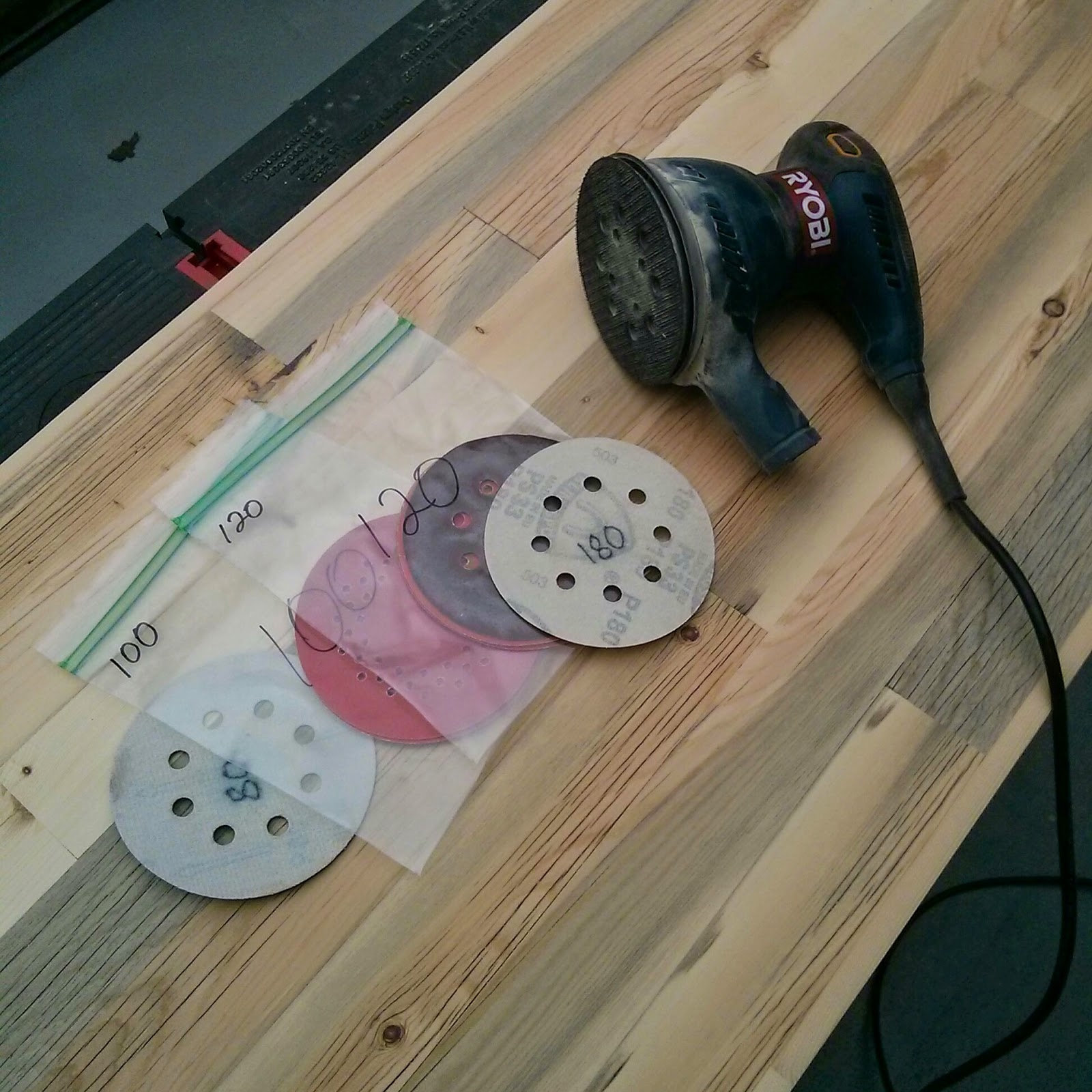 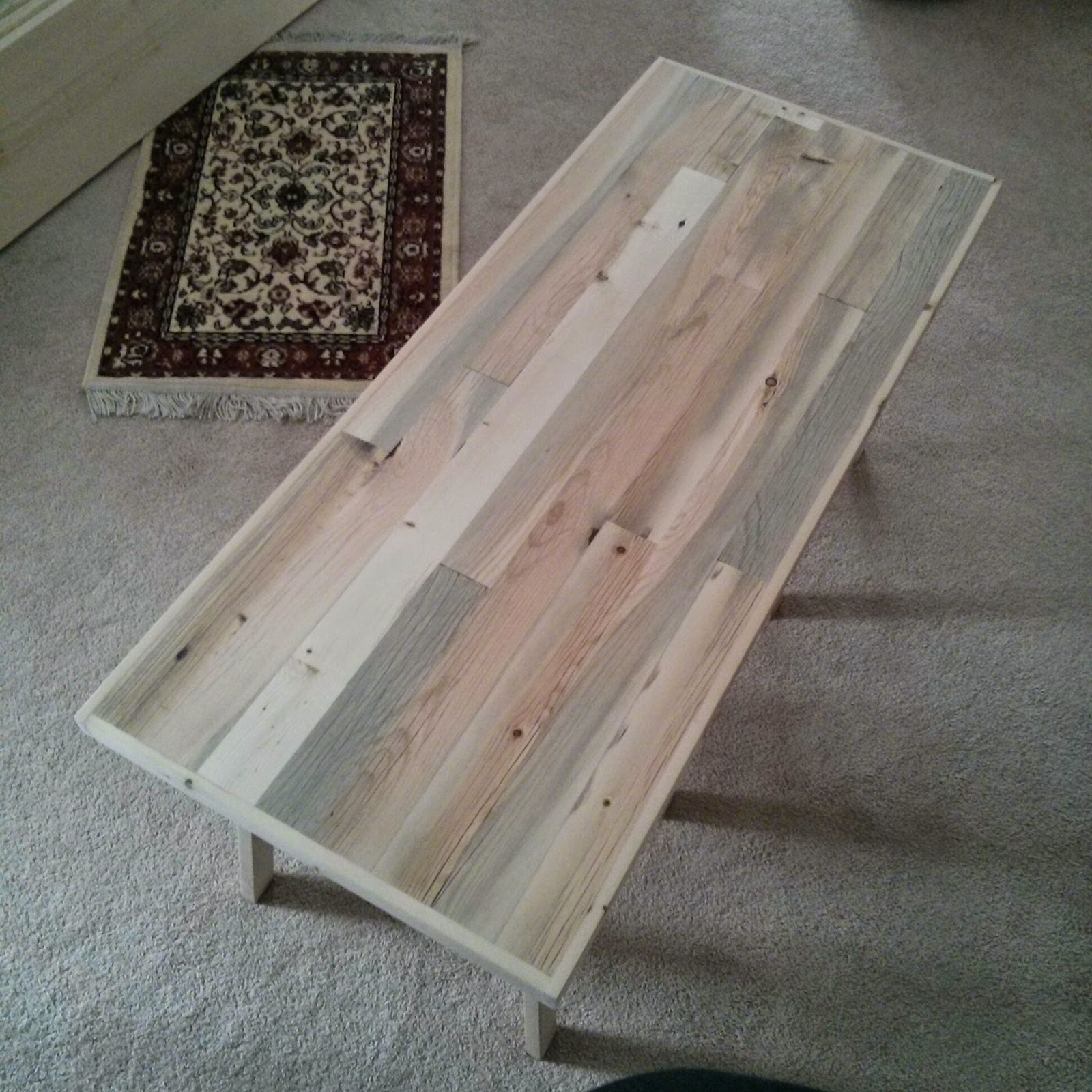 Now that the desktop was sufficiently smooth, I applied some Danish Oil. That was a huge mistake on my part. Why? Because I realized after that I wanted to apply a mild stain. The Danish Oil blocked most of the stain from getting into the wood. So the desk didn't turn out nearly as dark as I would have liked. Such is life, and lesson learned.

This was my first attempt at using anything besides wipe-on polyurethane, so it was a learning experience. I opted to use all Minwax finishes, since it's generally suggested to stick with one 'brand' if you are using multiple finish types. 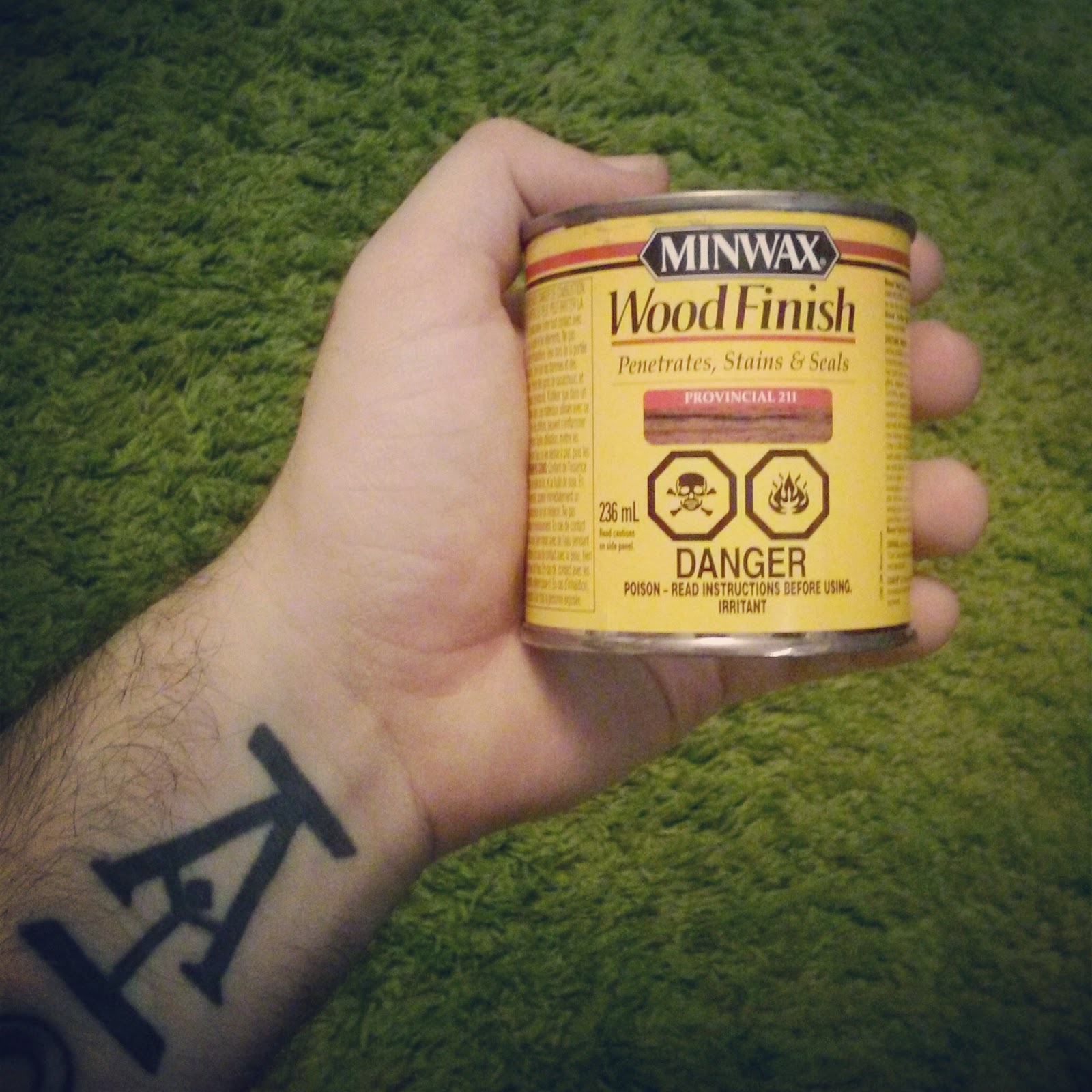 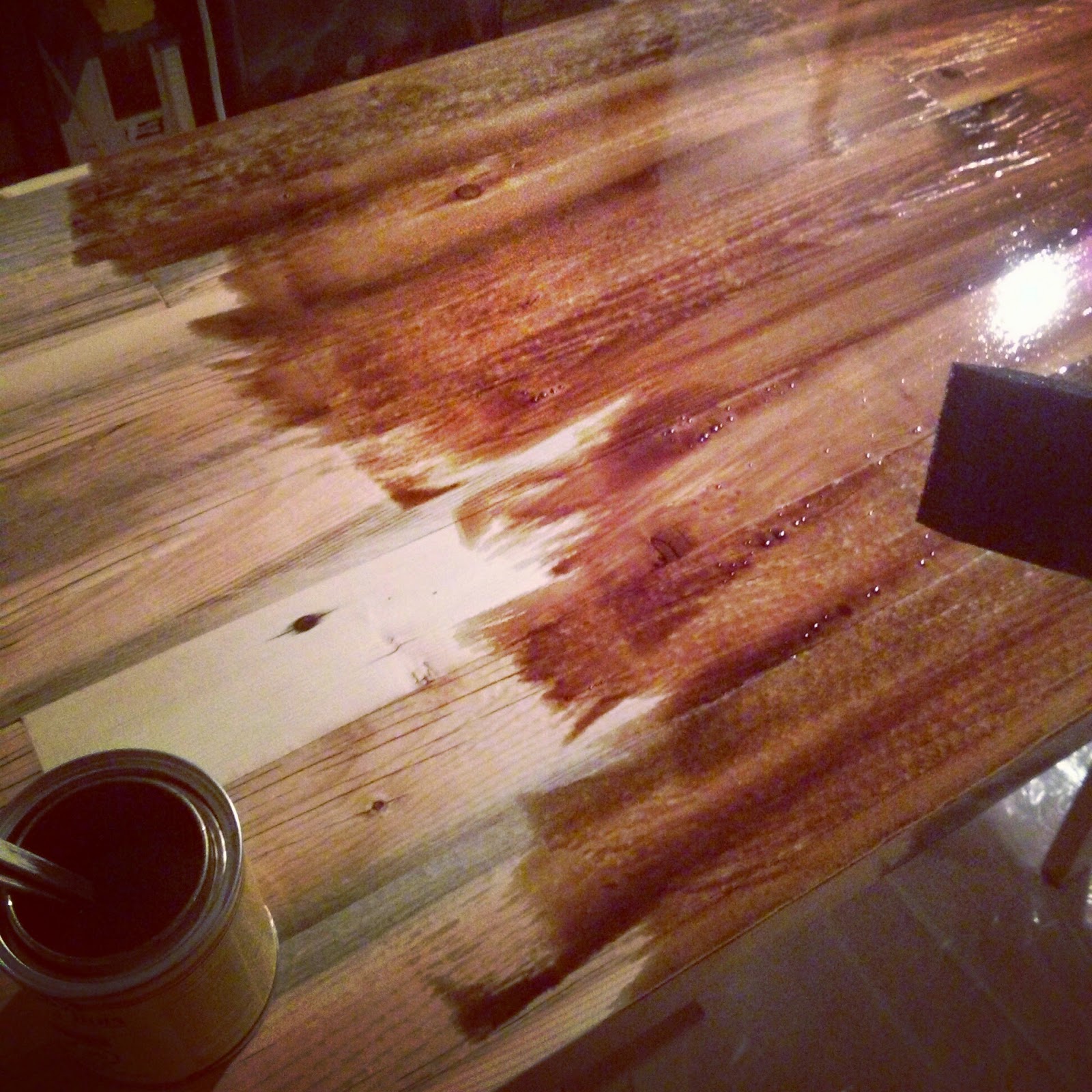 After the wood stain fiasco, I gave it a very light scouring with some "0" steel wool, and broke out the polyurethane. For the poly finish, I chose semi-gloss, and this was my first go with foam brushes - since they seem to handle more predictably compared to bristle brushes. (And I don't have to worry about cleaning.) 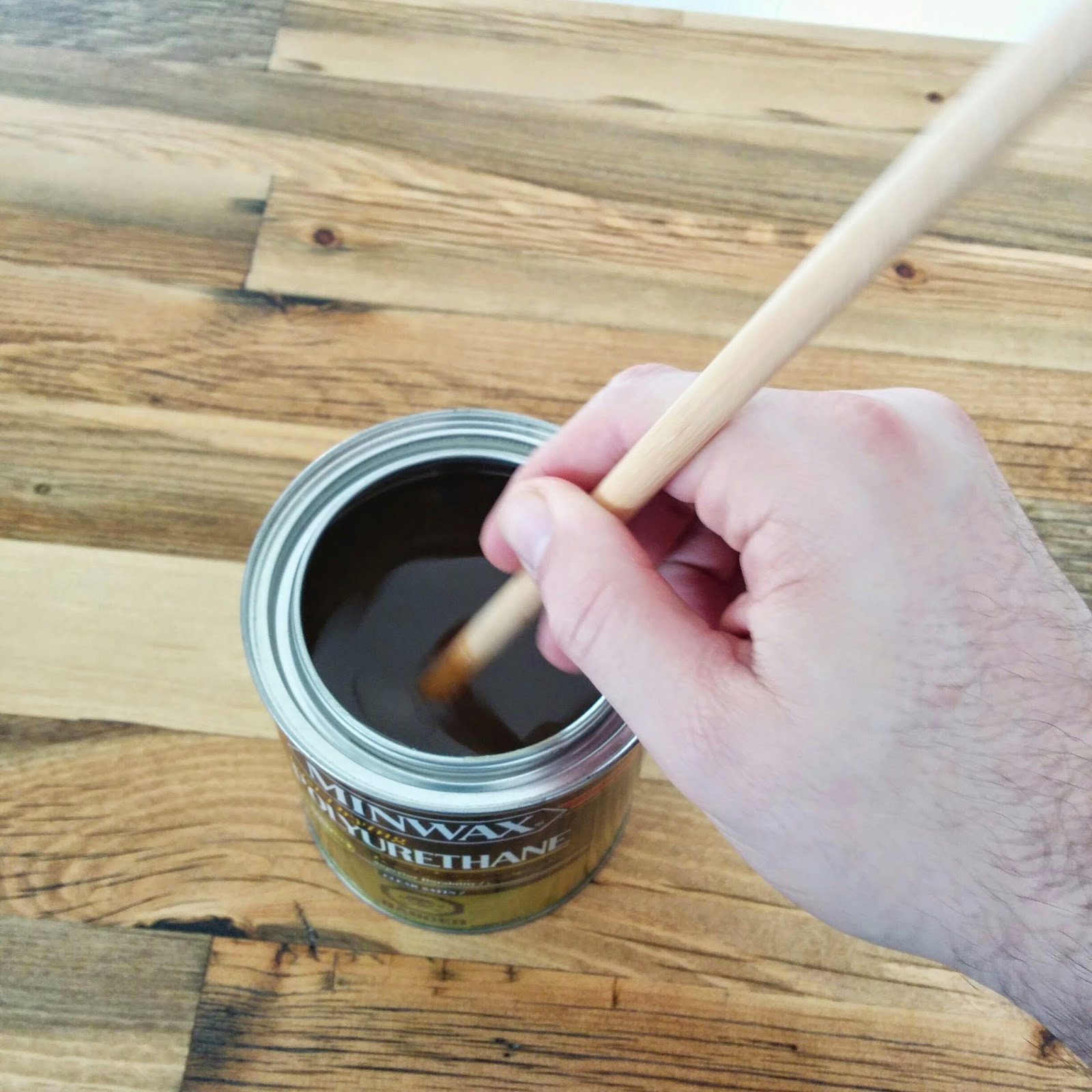 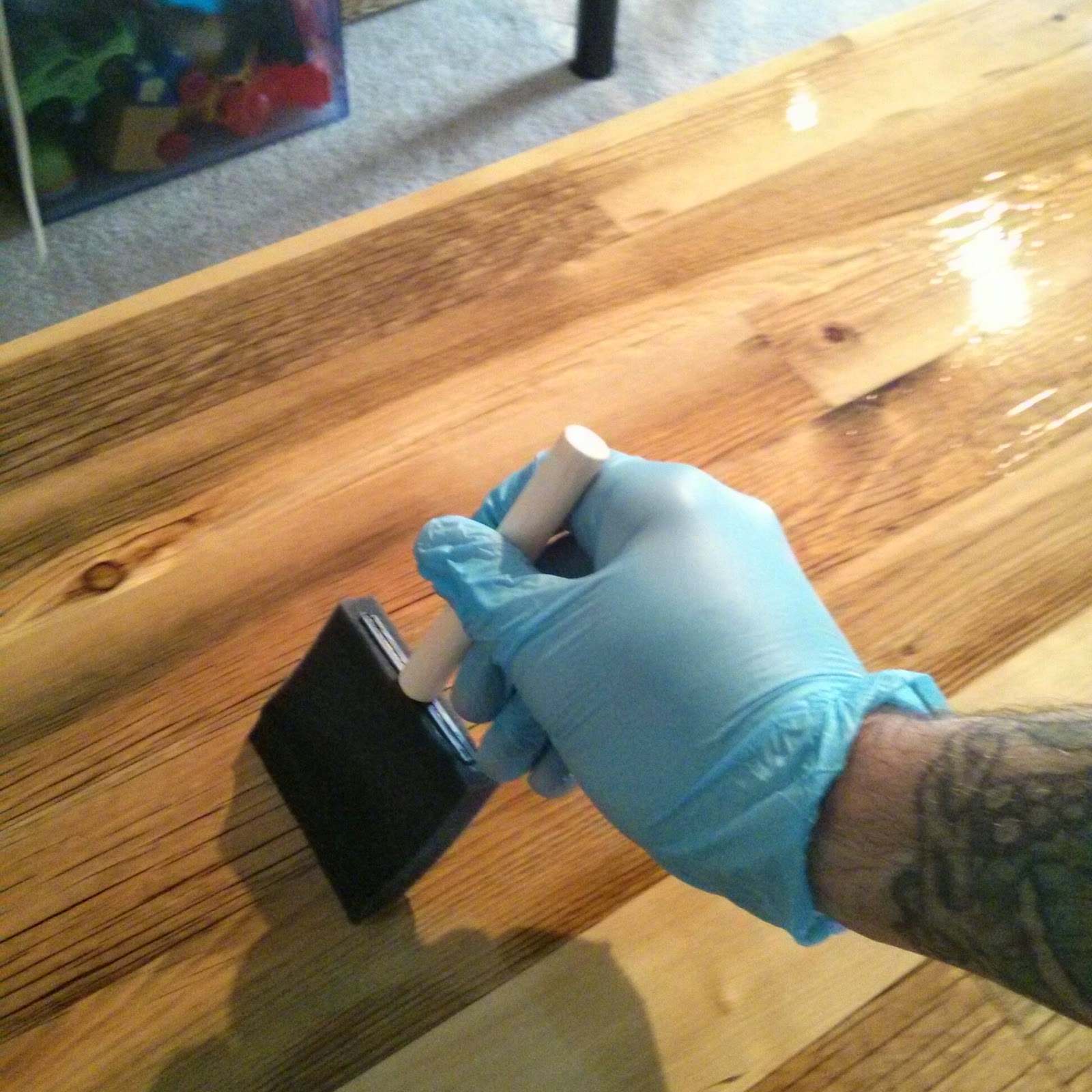 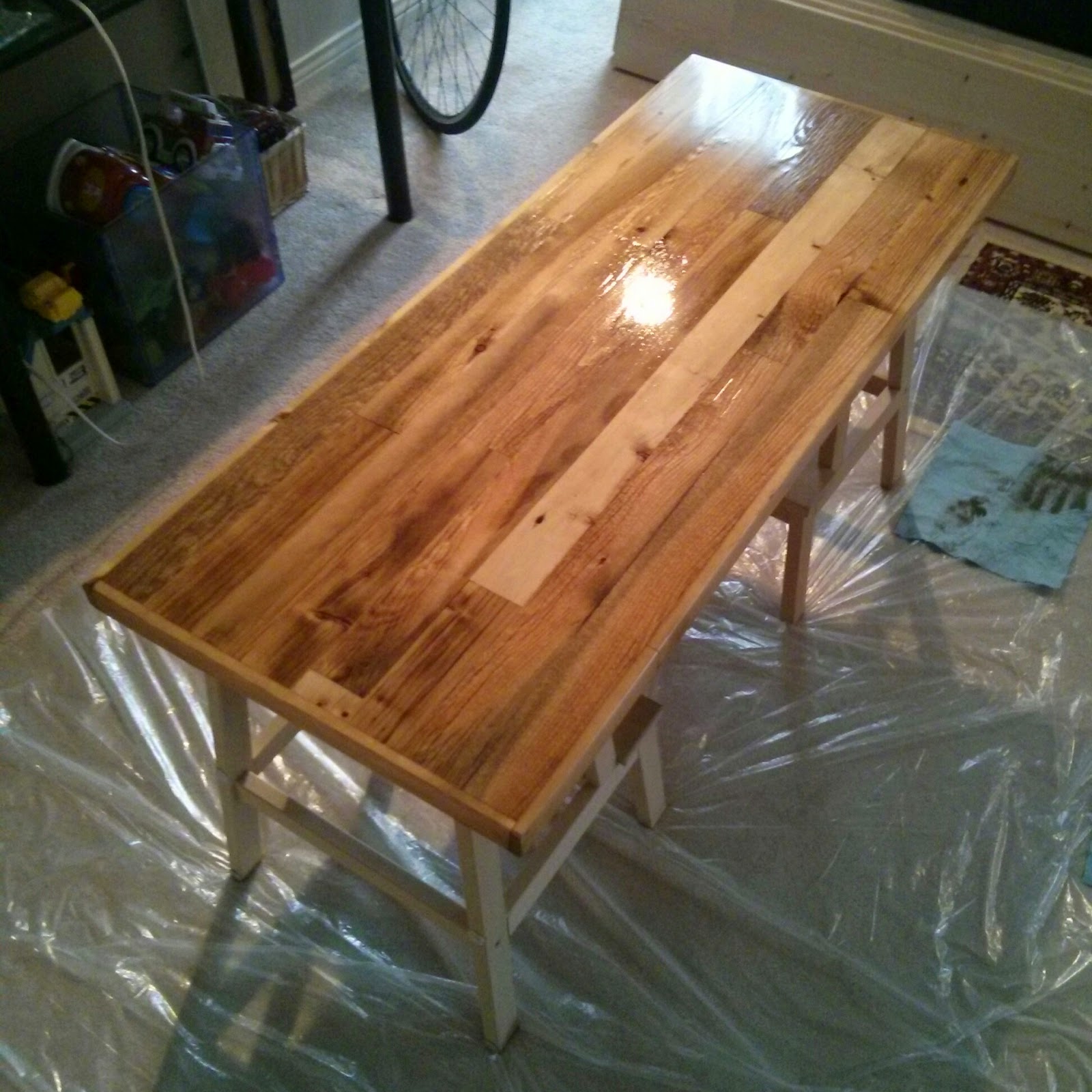 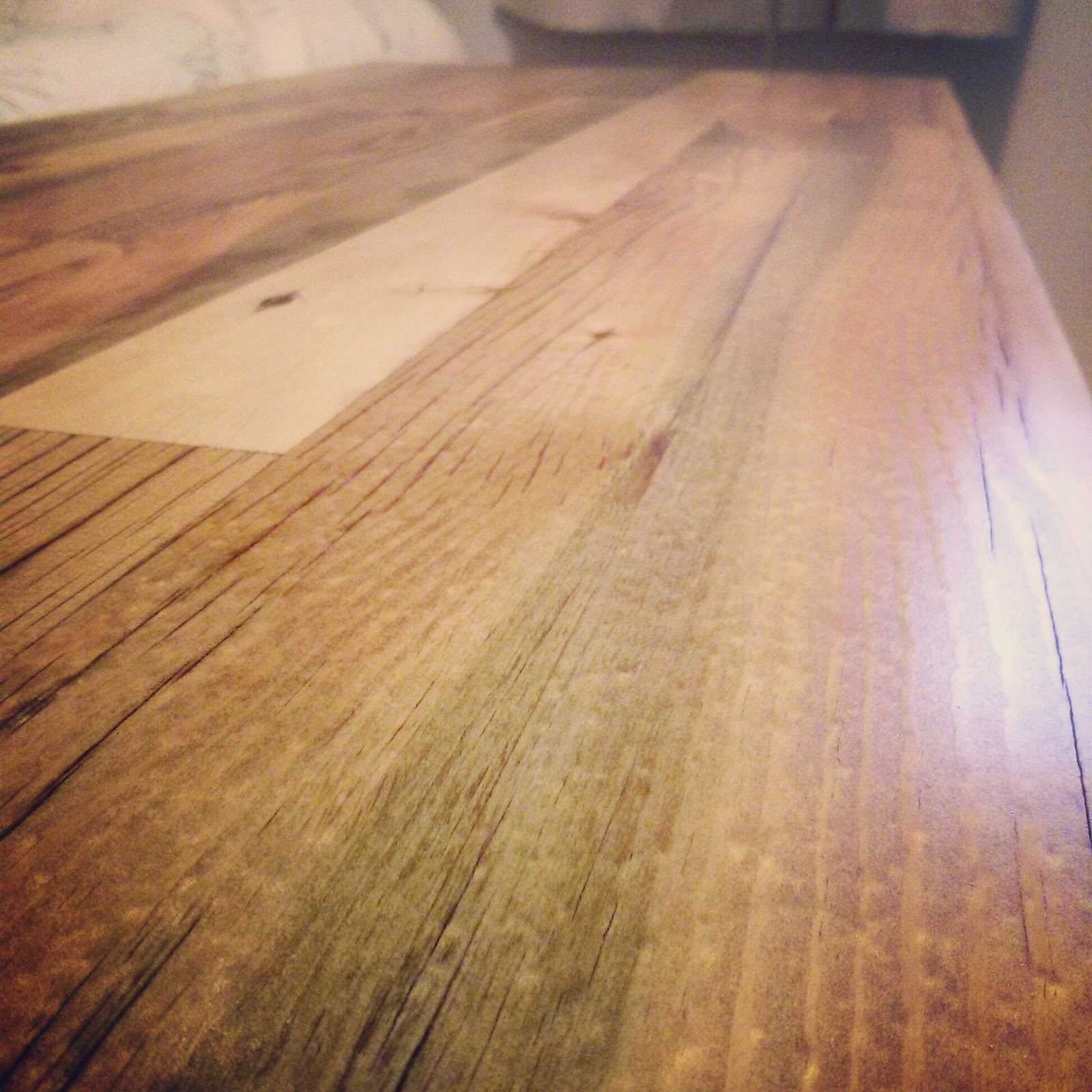 (Above: Very happy with the overall finish in the end)

I sanded by hand with 220 between coats, and before the final coat I hit it with "0000" steel wool. I didn't put too much effort clearing the polyurethane dust after sanding either because I read somewhere with a matte or semigloss finish, the dust actually helps dull the finish. And that seemed to work.

The pipe flanges I selected for the base were proving to be problematic. The screw holes were large, and tapered. The closest size I could come up with was a #12 or #14 wood screw. And that was a problem.

Wood screws of that size are common, unless you want them short. Like, 1 1/8" short (which was about as long as I could go without poking a hole into the other side of the desk - which would ruin the project.) After some research, I opted for the threaded insert route. 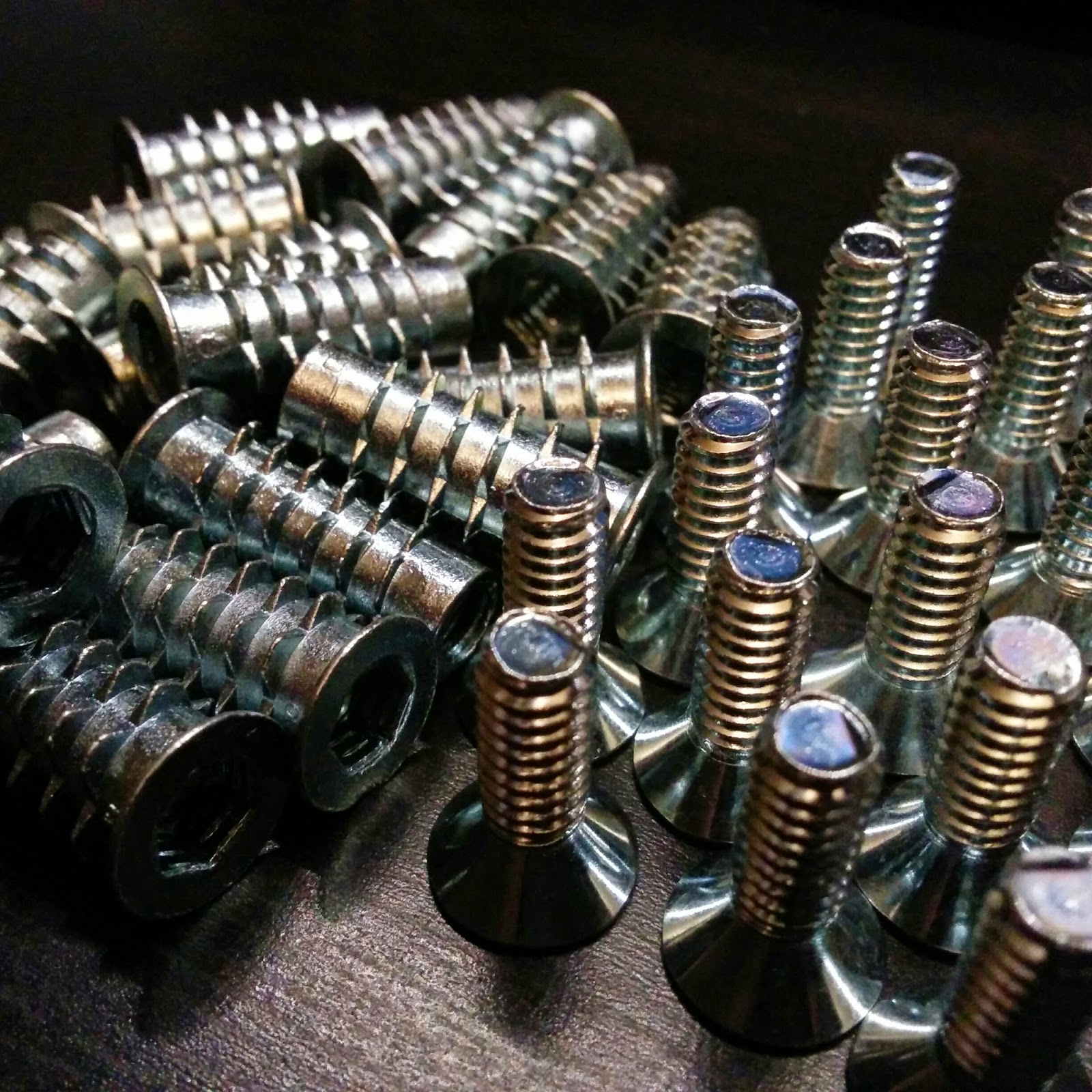 (Above: Flanged threaded inserts and 1/4-20 screws)

A quick trip to Lee Valley and a few bucks later, I had my inserts. Except the inserts were too long, and by the time I figured that out Lee Valley was closed until Monday... so I had to cut them, and yeah - myself in the process. 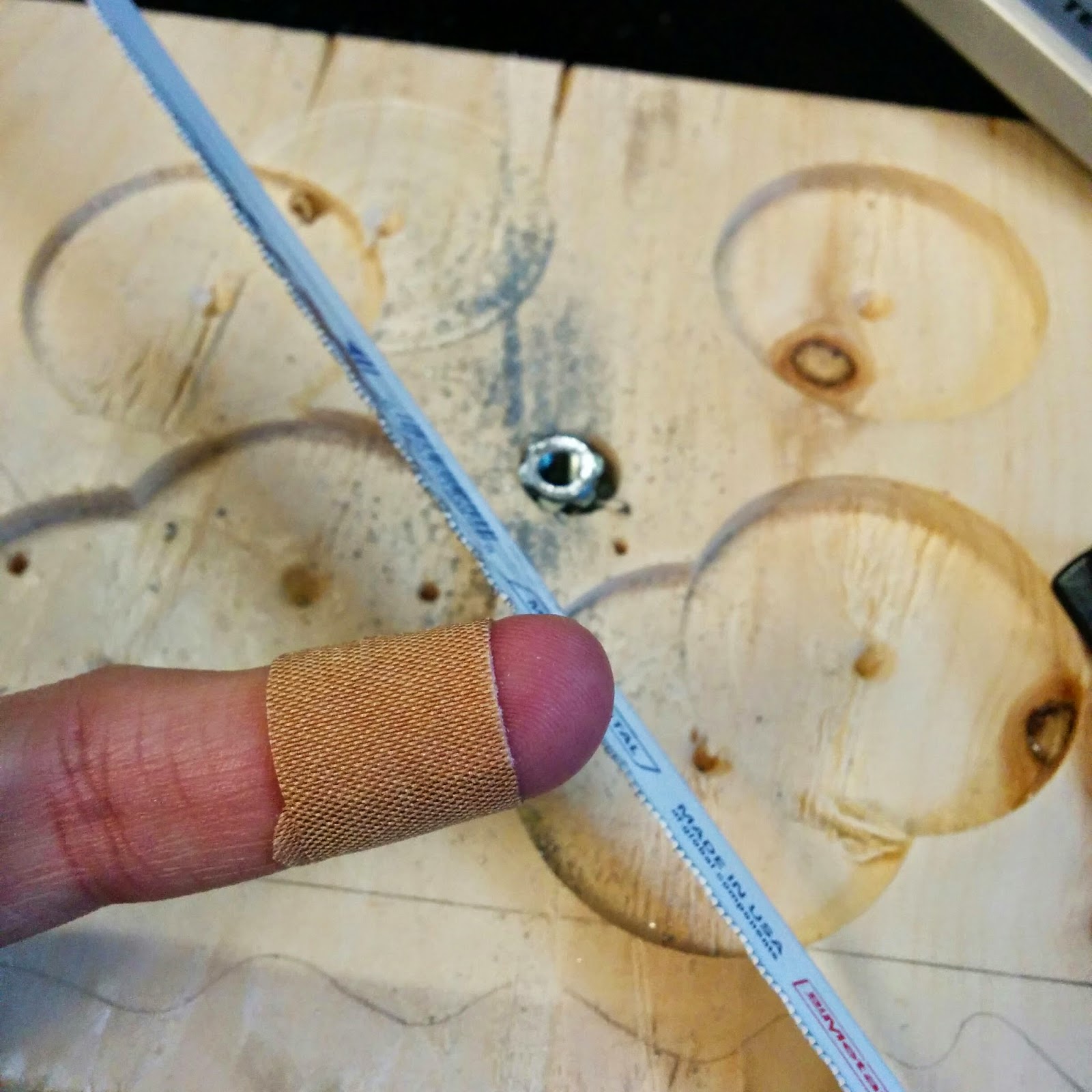 This project now contains both blood and sweat. No tears yet. (There's still time for that) On with the installation of the flanges!

The flanges would be about 1 1/4" inches from the sides of the desk. I also had to tape off my drill bit to go only 1" deep. Again, I didn't want to be shooting a drill bit through the desk and ruining the whole thing. I took careful measurements, marked everything with an awl, punched the centerpoints for the holes, and it was time for some drilling. 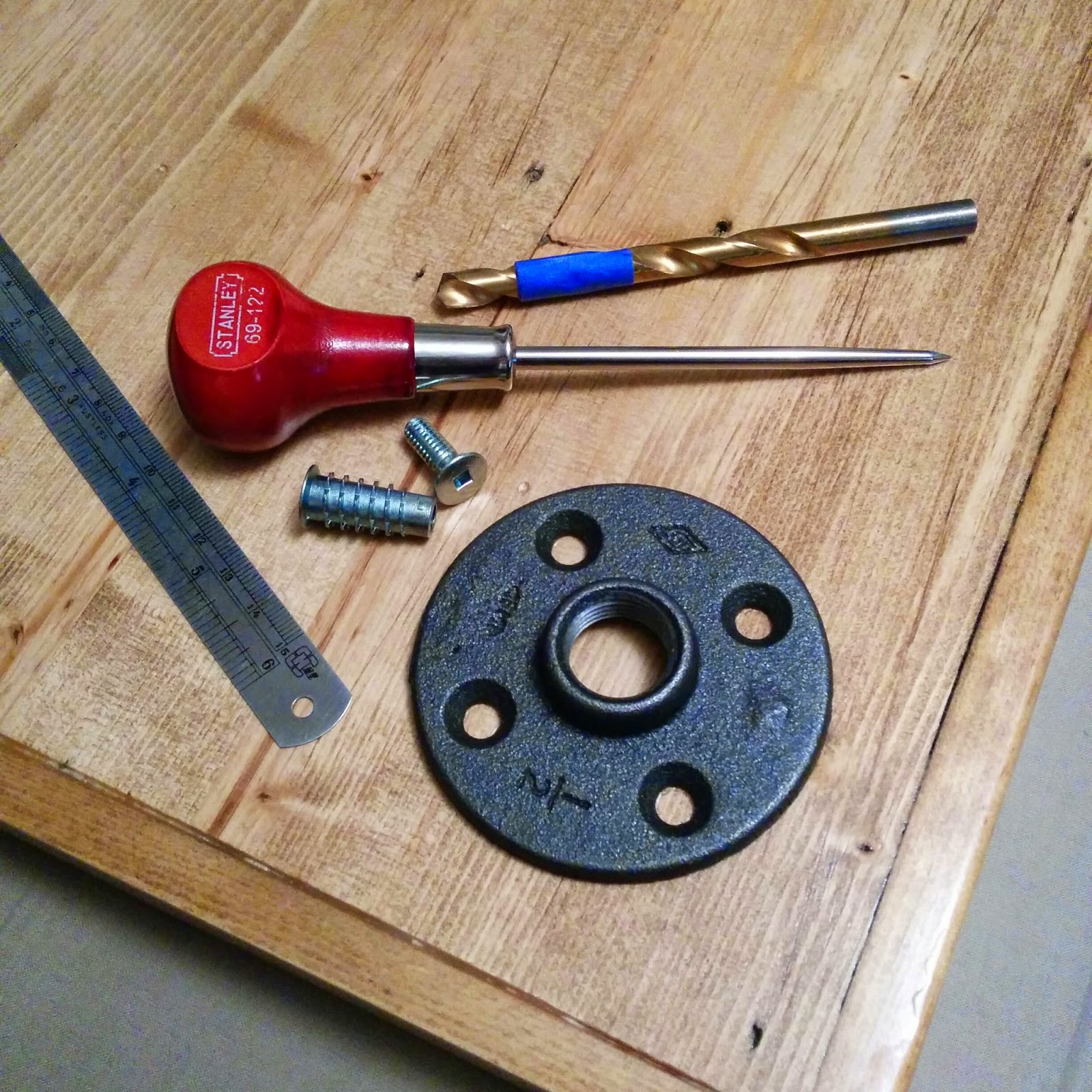 The original thought was I would use a pilot hole with a small bit, then the full size bit. It was at this point I remembered I own a forstner bit set, which would be a better choice. Flat-bottomed holes, and no need to pre-drill a pilot hole, the forstner bits were the obvious choice. 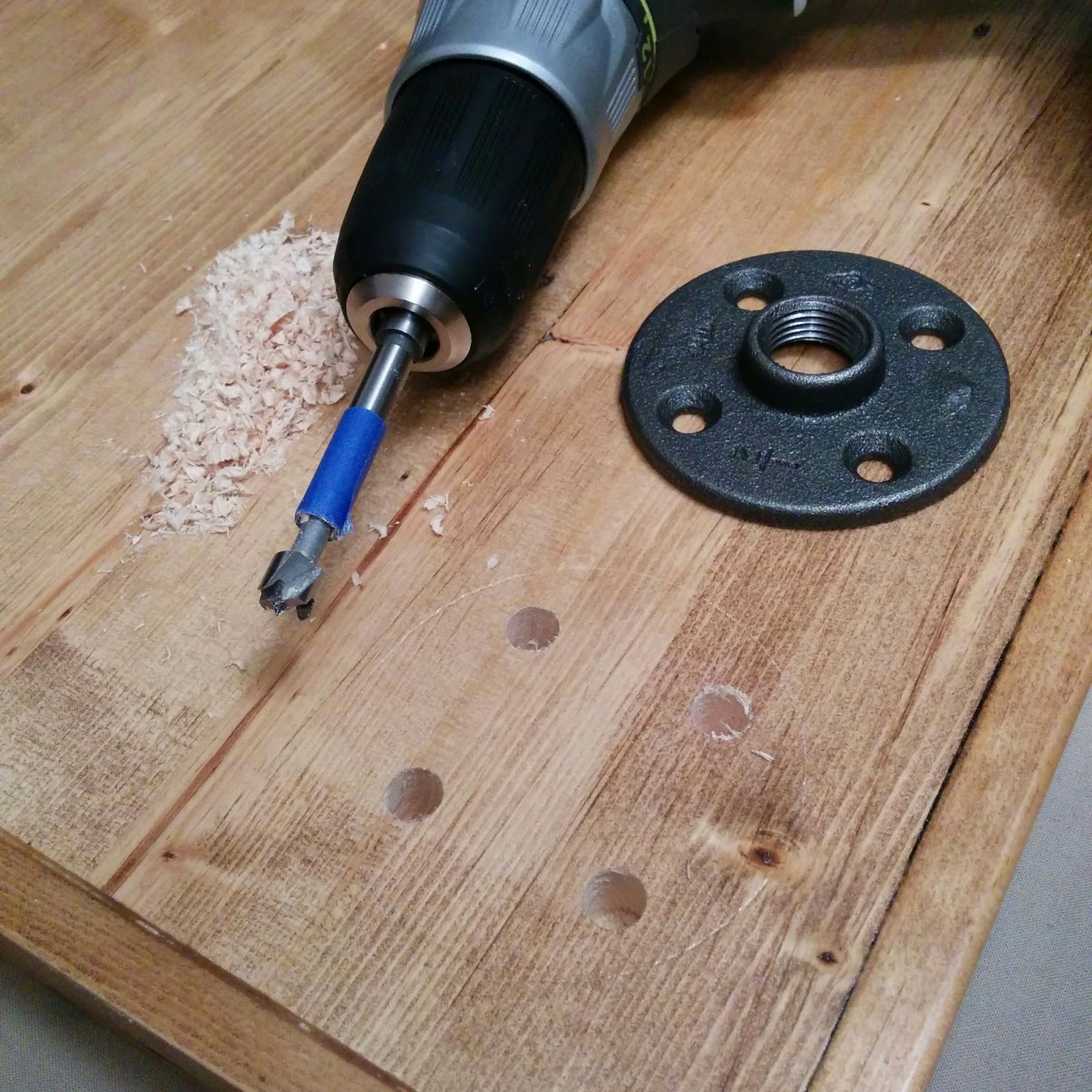 (Above: Forstner bits to the rescue!)

With the holes drilled for the inserts - I could work on installing the threaded inserts. I mixed up some two-part epoxy and coated the insides of the holes before threading in an insert. These were relatively easy to install, since the underside of the desk is pine - so the threads cut in easily. 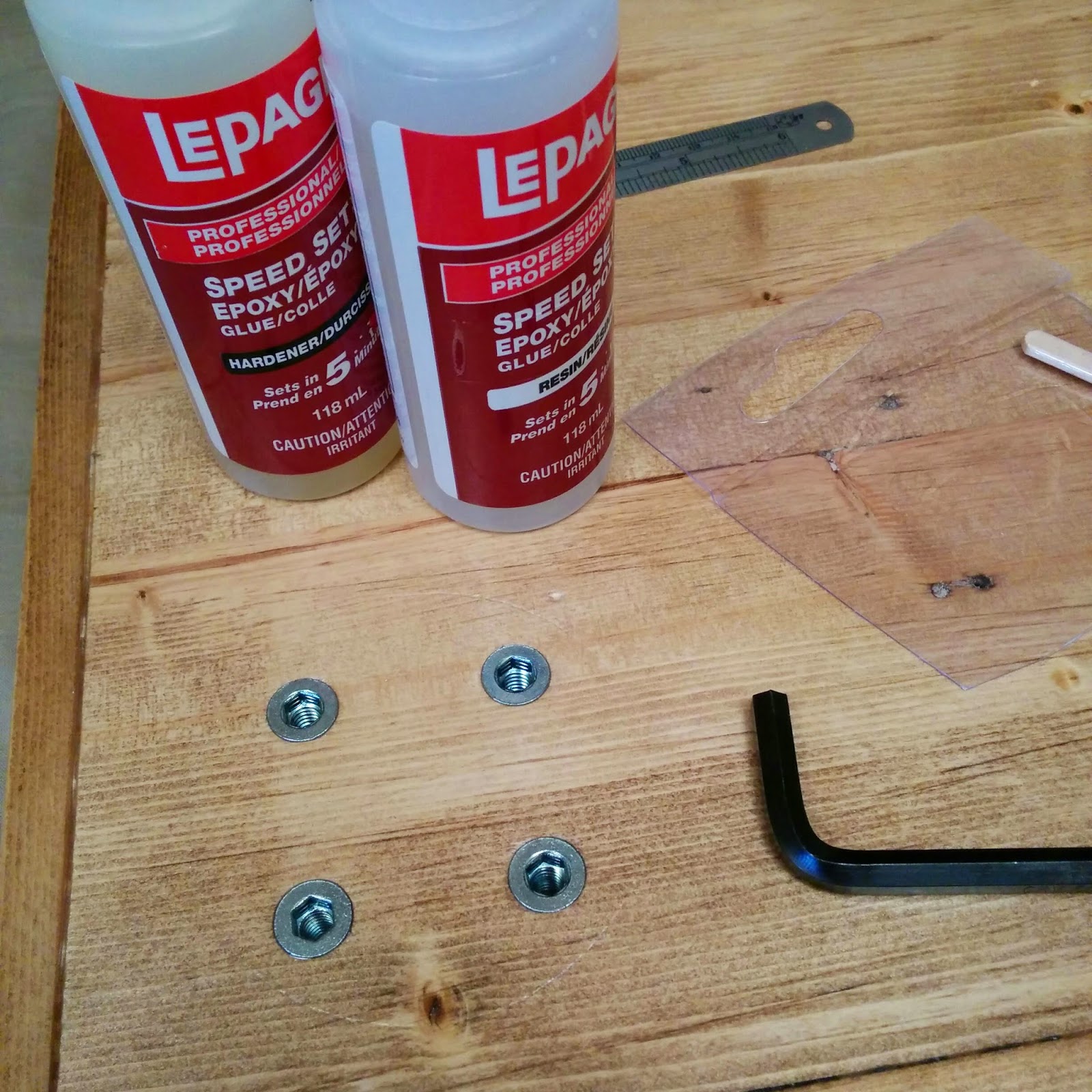 With the epoxy dry, I could check the 1/4-20 screws that I bought. The nice part about those screws? They matched with the holes on the flange plates quite nicely. 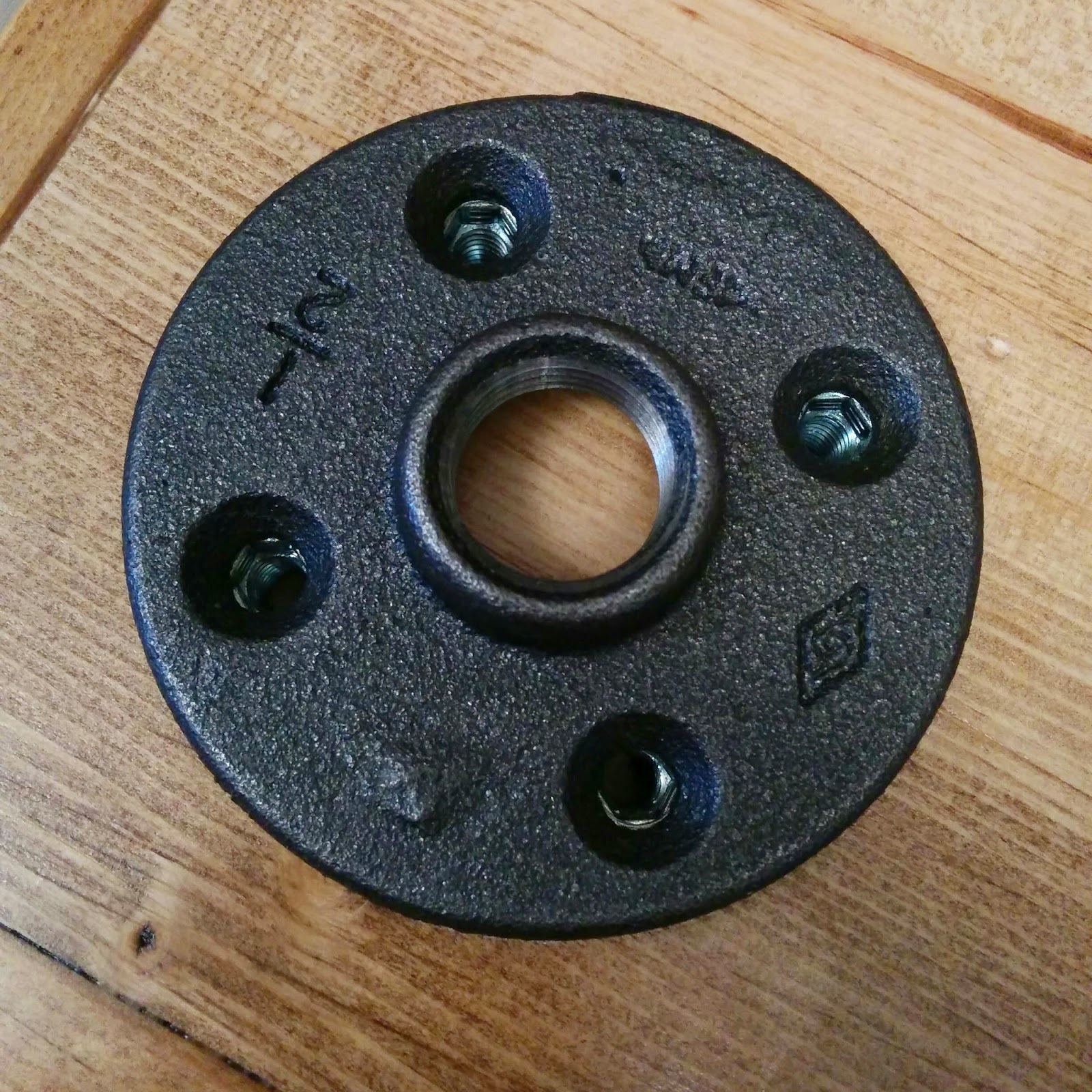 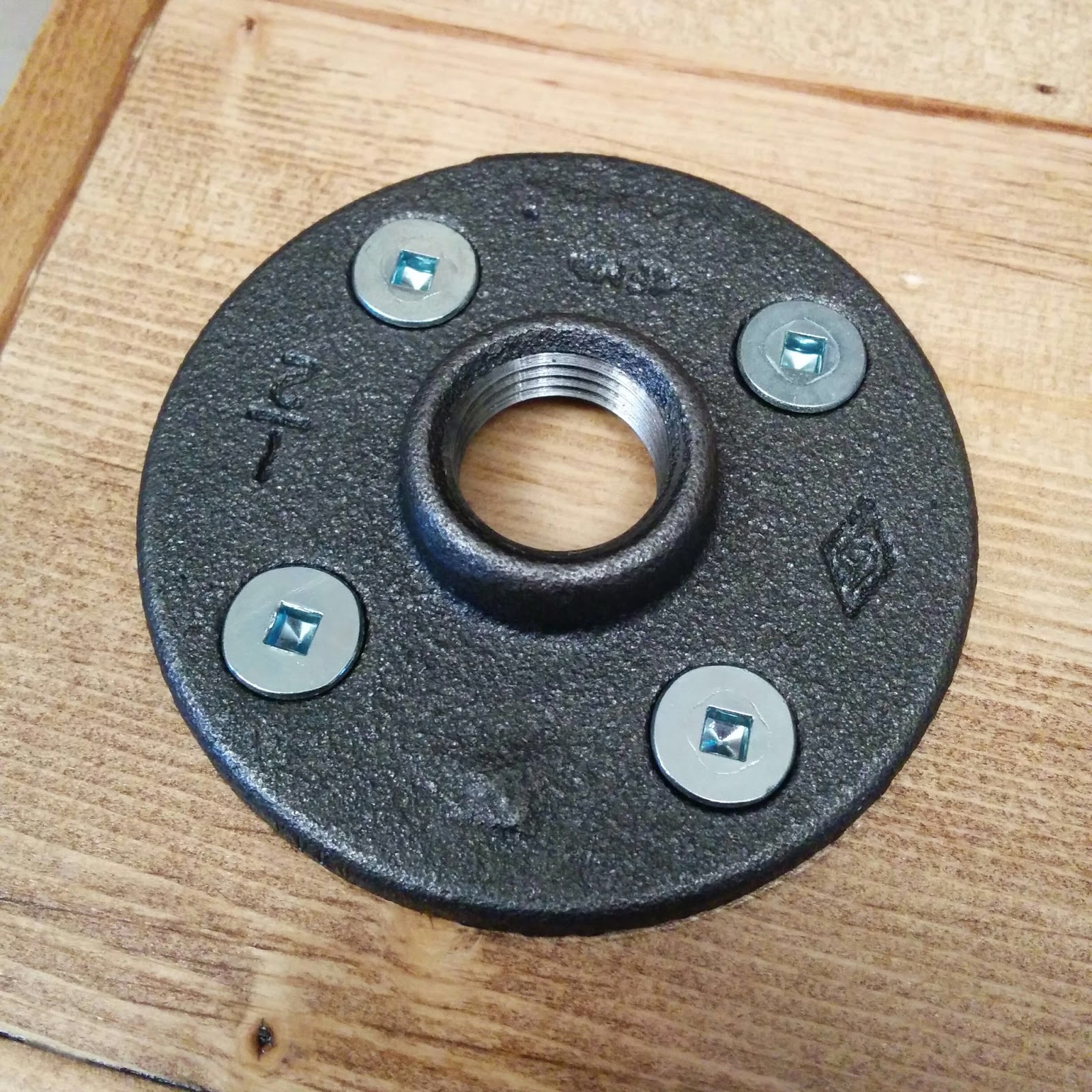 And they fit! The flange plates installed like a dream, held on nicely, and everything lined up great. I made sure to take a lot of care to measure, measure some more, check for square, and be careful through the entire process, since there isn't really an undo button.

Thanks for reading, and the next (and final!) article will detail building the legs/frame, and putting it all together!

Stay tuned for the final installment of this build!